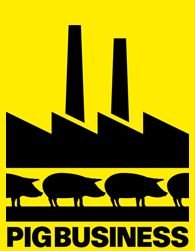 Ever feel like you were playing checkers and the other guy was playing chess?

That’s the sort of feeling I get often when I watch many of the recent spate of food documentaries to be released.  Activists announce that this or that is wrong with the food system, and on the rare occasion when something appears to be getting done about it, the folks who are doing things badly simply change their tactics, but not their strategy.

It happened again while watching the British documentary film Pig Business. I watched this film in several ten-minute segments via YouTube because it hasn’t been released in the US, primarily due to legal pressure brought upon the producer (Tracy Worcester) by the film’s main “villain,” Smithfield Foods (the world’s largest pork producer).  Despite four letters threatening litigation, the UK’s Channel 4 played the film last summer.  But since no US insurer would back the film’s release here in the States due to concerns over threatened lawsuits from Smithfield, it has become essentially a black market film.  Thus as Americans have fought censorship by our government for more than 200 years, corporate censorship continues unabated.

Smithfield does, in one sense, have cause for concern: this film certainly does not show their company in the most favorable light.  Right off the bat the viewer is struck with some rather gruesome images of pigs being brutally mistreated, apparently at the hands of workers in Smithfield-run facilities.  We hear from farmers and neighbors complaining of health problems that they tie to the fumes and water contamination from Smithfield hoglots.  When this large corporation and their methods of competition had pushed the owner of a small family farm in Poland out of business, he said, “I don’t know whether I should retire, hang myself, or emigrate.”

In Poland in the early 90’s, there were 27,500 independent pig farmers.  Today there are 2,200 hoglots, and 1,600 of them are wholly owned by Smithfield Foods.  Smithfield has 52,000 employees processing 27 million pigs per year in 15 countries and accruing annual sales around $12 billion.  Each of those factory farms in Poland replaced 10 family farms with 2-3 minimum wage jobs.  Any objective accountant might call that efficiency, but one protester in the film had another way to describe it:

Why is it, when people are in bondage to their government it is called ‘tyranny,’ but when the oppressor is a multinational corporation, it is called ‘efficiency?’

It was precisely this form of “efficiency” the art and social critic John Ruskin had in mind when he said “There is scarcely anything in the world that some man cannot make a little worse, and sell a little more cheaply.  The person who buys on price alone is this man’s lawful prey.”

Smithfield is not alone under Worcester’s microscope: she takes large financial institutions to task as well.  In an interview with noted Belgian economist Bernard Lietaer, he points out that Big Finance has its fingers in absolutely everything–making 1/3 of all political contributions in the US.  This is a figure that is sure to only increase in light of the Supreme Court’s recent decision in the Citizen’s United case.  Big Money’s influence, along with that of many other large and wealthy corporations, dictates the type and scope of laws throughout the US and the world.  My daddy used to call this the Golden Rule: He who has the gold makes the rules.

That influence is precisely what makes the competitive practices of Smithfield (not to mention many other agribusiness conglomerates) patently unfair.  As Pig Business points out, if the likes of Smithfield had to pay for the damages they cause–to the environment and to human health–then any small farmer in the world could out-compete them.  But they don’t, because the game is rigged.

So most of the time agribusiness will take its profits and go obliviously on its way.  But if anyone points out that this emperor has no clothes, they have scads of lawyers and PR professionals to make certain no one hears.  Watching Pig Business on YouTube is one small way to get past their invisible hand.