Foodprint NYC: The First in a Series of International Conversations about Food and the City | Civil Eats

Foodprint NYC: The First in a Series of International Conversations about Food and the City 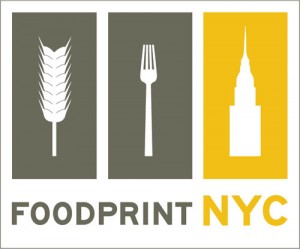 This Saturday, New York City will be the first participant in a series of international conversations surrounding food and the city. The event is organized by The Foodprint Project, a collaboration between Nicola Twilley and Sarah Rich, a founder of Civil Eats. Their objective is to use food as a lens to study local connections between food and geography, food and social behavior, and food and our future.

Taking their cue from the research of Kathe Newman, who theorized that a spatial analysis of cupcake proliferation could also reveal the flow of capital investment in cities, Twilley and Rich hope to navigate through and uncover New York City’s changing socio-economic patterns by inviting panelists and curious New Yorkers to engage in a discussion centered on the city’s foodscape.

The program features four panels, ranging in topic from policy and zoning to culinary history to food futurism. Panelists include Sean Basinski, founder of the Street Vendor Project and the Vendy Awards; Rebecca Federman, the culinary collections librarian at the New York Public Library; Amale Andraos, architect of the Public Farm at PS1 and New York’s first Edible Schoolyard with Alice Waters; William Grimes, author of Appetite City; as well as many other leading thinkers from the fields of urban studies, science, design, film and literature.

Foodprint Project’s trans-discipline approach melds both appreciation for and arguments against New York’s edible life. As the urban population continues to grow, our questions surrounding sustainability and the access to fresh, healthy, nutritious food, deepen as well. Panelists will discuss possible solutions to current food deserts, the future of design and architecture—as related to resource shortages and urban agriculture—and the visibility of New York’s social and economic inequalities within its changing neighborhoods.

“I feel that insights often come from applying the framework for one thing to a completely different thing,” explains Twilley. “Food and cities are both incredibly complex systems, but when you use one as the lens through which to examine the other, you learn something new about both.”

Foodprint NYC takes place at Studio X, a venue of the Columbia School of Architecture, located at 180 Varick St., Suite 1610. The event is open to the public. To see the complete program and read speaker bios, visit www.foodprintproject.com.