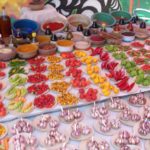 February 17, 2010: I crawled out of bed in a stupor this morning. The electricity blew out in my shared room last night, and by 8 o’clock, the bedroom—usually just tolerable enough to sleep in with the fan constantly whirring overhead–had turned into a sweatbox. I stumbled towards the kitchen for coffee and fruit. It wasn’t until I sat down and took my first sip that I realized it was finally over: Carnaval.

I peered over the high gate into the blessedly quiet streets. The wreckage remains, despite efforts late last night to begin to erase all traces of the City’s final summer fling. Confetti was stuck in the crevices between the cobblestones, beer cans strewn about, the last of the street vendors packing up their carts for the long treks back to the favelas.

Carnaval in Rio de Janeiro is the stuff of legends. Samba dancers decked out in elaborate headdresses and barely-there sequined bikinis, drunken revelry, free love. But after days of being confronted with constant noise, sweat, and groping (in the midst of our continuous heat wave, no less) around every corner, I’ve been waiting for this morning. A return to some semblance of normalcy.

I had actually been tolerating the chaos quite well for the first few days. Not coincidentally, those days coincided with a slight drop in temperature. I danced through the streets, kissed strangers (just imagine St. Patty’s day in Boston… and everyone’s Irish…for five days straight), faked the words to songs and chants I don’t know, packed myself into crowded metro cars for the ride to Ipanema’s epic blocos (street parties), and reaped the benefits of Rio’s lack of open container laws with caipirinhas concocted and consumed in the open air. But the partier in me wilted fast, and my frustration with the total shutdown of the city bubbled up quickly. The final straw came yesterday, Tuesday, when my favorite street market was canceled for the holiday. And so I spent the last day of Carnaval sulking, wandering up into the quieter reaches of my neighborhood in search of peace, waiting it out.

Despite my grumblings (and very real bitterness that Carnaval got in between my weekly produce grab and me), if there is one thing I’ll miss most about this city, it is the way virtually all life seems to be lived on the street. And although Carnaval is certainly a larger-than-life example, the way in which Cariocas interact with one another and with their food in public spaces—the way every meal, every beer, ever outing the beach can become a party—has become a point of admiration. When compared with the constant rush of New York and many first-world cities, and the way in which their cultures treat food as a necessary interruption to the mad dash of daily life (and is thus often consumed as fast as possible with as little effort as possible), the Cariocas’ attitude towards their food—its purchase, preparation, and consumption—has come as a welcome change.

Although I’m certainly aware that any food culture is the result of a complex history and set of norms, I can’t help but believe that part of the reason Rio has such a hedonistic attitude towards its food is its incredible beauty and variety. Since stumbling upon the enormous market at Catete station during a restless walk my third day here, I have been blocking off half a day each Tuesday for the market. Wandering through the stalls is, to me, as exciting and beautiful as Topkapi Palace in Istanbul, a Picasso canvas viewed for the first time, the Notre Dame cathedral. I feel giddy each time I step into a new food market, but none has ever been so stimulating, so strange, as Brazil’s. Mounds of produce both familiar and foreign, more types of peppers than I can count, cheese, honey, fresh shredded coconut, and piles of manioc meal greet me with each visit. The mingling scent of limp leaves crushed underfoot, the ice melting off from the fish stall, Minas cheese on an open grill.

The market is where I go to feel in my element, peppering vendors and other shoppers with questions about names, origins, and preparations of various foods. Nowhere have I had more opportunity to practice my Portuguese and also found myself more frustrated; if only I could ask the capsicum vendor to discern for me the heat levels of his many chilies, or engage the jaca fruit man in a conversation about where he harvests the enormous fruit (does he carry it out of Tijuca National Park, as I’ve seen so many do as I hike up to swim in the waterfalls there?) and why he has a folding table on the outskirts of the market rather than a proper stall in the square.

I shoulder my way through the crowds, but with no sense of hurry, often stuck for long stretches of time between old women squeezing and smelling produce, leaving their shopping carts in the middle of the already-tight pathways. I bargain. I taste. I buy too much to carry.

By high noon, I am always exhausted, and it is time to plant myself in the shade of the pastel tent and replenish my energy stores. Pasteis (fried wontons filled with all manner of savory concoctions) are something of a religion in Brazil, and accompanied by a cup of freshly pressed caldo (sugarcane juice), they provide the perfect snack for marketers in need of a break before the ordeal of getting their purchases home. The pastel vendors have quickly become friends, and are endlessly patient with me as I try to engage them in small-talk, posing for pictures, gleeful when I tell them how I wait each week for this hour of rest and people watching as I gulp cup after cup of their abrosial caldo. I always return home exhausted but absolutely content, already dreaming of how I’ll prepare my week’s bounty.

As the end of my stay in Rio draws near, I find myself speculating about how drastically different this city will be if and when I visit some years from now. In light of the 2014 World Cup and the 2016 Olympics, Rio’s mayor is instituting a series of policies to crack down on open air food vendors, an entire economy in and of itself and, as far as I can tell, the source of many of the Cariocas’ calories. Green coconuts can no longer be sold directly on the sands of the beach. Popcorn, grilled meats, and cut fruit area among the foods on the watch-list. An entire culture is being systematically dismantled (or at least an attempt is being made to do so) in order to promote Rio’s image as a first-world city. It seems to me this is as much sacrilege as banning Carnaval from the streets. Attempting to relegate Rio’s life to contained spaces, to sterilize, homogenize, “modernize”, isolate. At what cost? And to whose benefit?

As I anticipate my final market day next week, before I head on to Sao Paulo, I find myself struck, suddenly, but my first real wave of “saudade”; a preemptive nostalgia and yearning for the food culture that exists here, those distinct food cultures I have experienced elsewhere, and all those that may soon be lost.