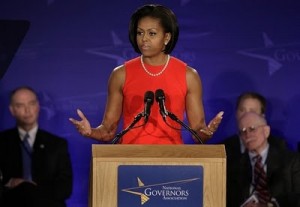 It’s a good thing First Lady Michelle Obama is an Ivy-league educated lawyer, because with Let’s Move, her ambitious campaign to end child obesity in a generation, she has waded into a debate that has, since the nation’s founding, been at the center of our national discourse: Individual rights vs. the interests of the state. It’s all under the rubric of improving child health and making healthy food available to all, of course, but Mrs. Obama has spent a lot of time in the past two weeks explaining how her campaign is not treading on Constitutional issues, or personal choice. And that it’s not about government control, but rather about individuals and groups taking responsibility for their own actions, with food choices and health choices. Debates in America about food/agriculture and health are already highly contentious, with a longstanding philosophical divide between those who promote conventional production vs. organic and sustainable production, between the value of local foodsheds vs. transnational sourcing, among other things. Mrs. Obama’s new campaign adds an entirely new portfolio of issues to the discourse.

The First Lady once again waded into Constitutional issues on Saturday when speaking to the National Governors Association during the opening day of their annual winter conference in Washington, DC. From the podium in the ballroom of the JW Marriott, Mrs. Obama assured the state leaders that her campaign will not impinge on states’ rights. But at the same time, she might have been channeling Ben Franklin as she quoted the grim obesity statistics that are now a regular part of her stump speech, and appealed for the state leaders to support Let’s Move. She might as well have said join, or die to the governors, as she pointed out that America’s children are suffering from an epidemic of crisis-level proportions, and that obesity crosses all party lines, and there needs to be a unified front to combat it.

“The way I see this, there is nothing Democratic or Republican, there is nothing liberal or conservative about wanting our kids to lead active, healthy lives,” Mrs. Obama. “There’s no place for politics when it comes to fighting childhood obesity. And I know all of you agree.”

Mrs. Obama addressed the nation’s mayors with a similar appeal last month, when they were in Washington for their own winter meeting. During her remarks then, the First Lady noted that “the health and well being of children must guide every decision.” Casting the Let’s Move campaign as a moral imperative, a crisis of conscience, adds to the tricky nature of Let’s Move. And children, Mrs. Obama contends, are the victims of the lack of conscience from individuals, government, and private corporations.

“Our kids didn’t do this to themselves. Our kids didn’t decide whether there’s time for recess or gym class, or our kids don’t decide what’s served to them in the school cafeteria,” Mrs. Obama told the Governors. “Our kids don’t decide whether to build playgrounds and parks in their neighborhoods or whether to bring supermarkets and farmer’s markets to their communities. We set those priorities. We make those decisions. And even if it doesn’t feel like we’re in charge, we are.”

The campaign is a complicated commingling of politics, political will, personal will, and government action–on the federal level, on the state level, and on the local level. It’s heroic that Mrs. Obama has been willing to put herself at the center of the action. It’s enormously risky. It’s unprecedented. It’s working, so far, because Mrs. Obama has enormously high popularity poll ratings, and she’s phrased much of the campaign from the perspective of a very worried Mother In Chief. So far, Mrs. Obama has received more support than criticism–though there has been plenty of criticism–from those who accuse her of violating the civil liberties of fat people to those who worry that Let’s Move is more government intervention, gone amok. Conservative commentators Glenn Beck, Michelle Malkin and Rush Limbaugh have led the charge in this area.

As she praised the Governors for steps already taken to combat obesity, and urged them to get on board her campaign bandwagon, Mrs. Obama also pointed out that the federal government will not be intervening in state activities.

“Comprehensive and coordinated doesn’t mean centralized,” Mrs. Obama said. “I’ve spoken to so many experts on this issue and not a single one of them has said that the solution is for the federal government to tell people what to do. That doesn’t work.”

But the government will, obviously, be offering support: The President created a Child Obesity Task Force two weeks ago. There’s the Let’s Move website, that’s intended to be an information clearing house for parents who want to make healthy food choices. On Friday, Mrs. Obama visited Philadelphia to launch the Healthy Food Financing Initiative, a government fund that offers incentives for building healthy food outlets in underserved urban and rural areas. Each is one branch of the ambitious Let’s Move solution to the complicated problem of child obesity; Mrs. Obama told the Governors that different states must have different solutions, and that there is no one-size-fits all model. That thinking is in line with all the most recent studies on improving food access and food security; solutions must be culturally specific, and tweaked to fit local populations and local action. Nebraska will have a different solution than Hawaii. This is also, of course, an argument for local foodsheds, left unsaid. Because Let’s Move also has a number of shadow agendas: Re-localizing food sheds, demolishing decades of racially biased food access problems, gradually getting food companies to truly (voluntarily!) alter their offerings. Join, or die.

Mrs. Obama also raised the economic costs of child obesity, something the federal government is struggling with, as are the state governments. The primary focus of the Governors’ meeting is figuring out strategies to combat ballooning healthcare costs on the state level.

“If we think our health care costs are high now, just wait until 10 years from now,” Mrs. Obama told the Governors. “Think about the many billions we’re going to be spending then. Think about how high those premiums are going to be when our kids are old enough to have families of their own and businesses of their own.”

But while claiming that there will be no impinging on states’ rights, Mrs. Obama also told the Governors about the upcoming reauthorization of the Child Nutrition Act, the federally funded school lunch program that’s in schools in every state of the union. A pillar of Let’s Move is a major revamp of the food standards for the program, to make these far healthier, as a way of hitting a child population of about 31 million, which encompasses many children who are obese or at risk for obesity. The program exists in those most basic and local of government institutions, public schools. The federal school lunch program is, at the end of the day, a critical component of healthcare reform, as well as food system reform. Now, and for future generations. Mrs. Obama has gotten agreements from the major school food providers–Chartwell, Aramark and Sodexho–to dramatically improve their offerings, and incorporate more fresh produce, more whole grains, low fat dairy products, and to reduce sugar, fat, and salt content. Some critics have dubbed the time frame for this as too long–between five and ten years–but these are large conglomerates. They’re the food world equivalent of Fat Cats (perhaps quite literally).

There were some light moments during Mrs. Obama’s remarks. She had two amusing bits of information to offer the Governors: President Obama is very bad at the popular video game Dance, Dance Revolution, which he’s tried and failed at while vacationing at Camp David….and eliminating child obesity is a conservation issue that Teddy Roosevelt would approve of.

It remains to be seen if conserving our nation’s youth is something that will, actually, happen, and whether or not the states aggressively join the campaign.