Doing What Needs to Be Done: Lessons of a Foodshed Nomad | Civil Eats

Doing What Needs to Be Done: Lessons of a Foodshed Nomad 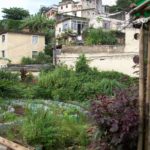 February 11, 2010: I’m sitting on the terrace of my temporary home in Rio, Casa Amarelinha in the Santa Teresa neighborhood of Rio de Janeiro, feeling remotely cool for the first time in over a week. It’s been hard to think much in this heat—we’ve been topping 110 degrees regularly this past week, in one of the worst heat waves Rio has seen in recent memory (to exacerbate what has been an unusually hot summer all around), with about 75% humidity. When the mercury rises to about 90 back in New York, everyone retreats into their air conditioned offices and apartments or flees to the beach or countryside. But here in Rio, life in the streets goes on in full force, despite the blazing sun. I am so grateful it does, for what life courses through the streets of this city! However, the oppressive weather has made my volunteer work challenging to bear, even for a seasoned farm gal.

Heat aside, my work has been rather disappointing all around, but also a tremendous lesson. The garden in which we are working is just over two years old. The half-acre plot sits right at the intersection of bohemian Santa Teresa and one of the surrounding favelas (an elegant word that masks its true meaning: sprawling slum). A group of impassioned volunteers from the community (residents, doctors, artists, longtime home gardeners, agronomists, concerned community members) came together to reclaim a vacant lot and turn it into a verdant oasis of food production and a place for residents to spend time outside (their homes are quite small and the favelas use up every patch of ground available for housing and walkways) and congregate. The photos of the garden it its first year are lovely—neat rows of greens and fruit tree saplings, smiling children holding freshly-harvested sweet potatoes, volunteers holding hands in a circle, discussing the work of the day. But now, with interest and support having waned over the last six months (as so often happens with community projects), the garden has gone practically to seed.

Most mornings are spent cutting back the vegetation in the blazing sun, preparing beds for plantings (some of which never take due to lack of rain and Rio’s frequent water system malfunctions), and cleaning out the debris that has accumulated over the months. There are two other Western women and I plus a Swedish post-doc. in urban ecology, Daniel, who is conducting an experiment in the garden and engaging in community issues and conducting interviews as well. Community residents pop in occasionally to buy a bunch of herbs or chat, often mocking the other volunteers and I as “gringos locos,” crazy foreigners come to work on this little plot of land.

I spent my first day at the garden brooding in frustration, wishing for the rapid pace and glory of planting, weeding and harvesting in a production atmosphere. But as I slowed and talked with Simone and Aureo, the community members who run the garden, a sense of acceptance settled upon me. As volunteers just passing through, we have to be careful where we offer our advice and ideas, how many initiatives we try to catalyze, and generally try to toe the fine line between imposing our own ideas and plans and offering up whatever assistance is asked by the community. I realized, if work that needs to be done is to clear the garden—to weed endlessly, repair fencing, rebuild raised beds destroyed by flash floods—then that is what we will do. It’s true, working at the horta communitarian (community garden) hasn’t been as productive or educational as I’d hoped agriculturally, but sometimes I’m caught by surprise at the enormous education to be gained by simply engaging with people with similar interests in a different cultural context; noticing the parallels and examining the divergences in our methodologies, our priorities, our ideals.

I know I will have much more to say on the subject of the garden in time, but some of it will have to wait, to marinate, develop. It’s certainly food for thought, though, to notice the remarkable similarities in community-based social projects here and in other places I’ve worked, and in particular to hear individuals’ thoughts about gardens and farms and their roles in struggling urban communities.

So although I’m not harvesting and distributing crate upon crate of gorgeous organic produce as I had hoped (although we do harvest the occasional papaya, malagueta pepper, and stunning Brazilian greens for ourselves and neighbors), I am in the throes of an important learning experience. “The work of the world is common as mud,” wrote Marge Piercy in her iconic poem “To Be of Use.” I am not, I must remind myself, here to revel in my own glory or to turn a project on its head. I am here to help, to be of use, to give with my sweat and my blisters and my time. To leave my ego behind and open myself to another context, other ways of doing and thinking. To build trust and relationships. That is where the impact and fodder for lasting change lies.