Rain City Farmers Get a Year in the Sun | Civil Eats

Rain City Farmers Get a Year in the Sun 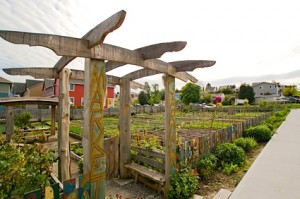 The city government of Seattle has declared 2010 the Year of Urban Agriculture. The program, developed through the Department of Neighborhoods, aims to make locally-grown produce affordable and available to as many of Seattle’s diverse residents as possible, while supporting the urban and exurban farmers who grow it. New zoning laws will allow backyard farmers greater flexibility in what they grow and raise on residential property, and a bold pilot program is in place to create ten urban farms inside Seattle city limits.

This initiative is just the latest stride for a city that has long been the pacesetter for sustainability in the American Northwest. As a transplant to Seattle I was immediately impressed by the vigor of the city’s farmers’ markets, where a variety of SNAP and senior public benefit programs give struggling families access to the healthiest food for the lowest cost. Before moving to the Rain City, I spent four years in Egypt–one of the oldest farming societies on Planet Earth–so I was spoiled by a superabundance of locally grown food sold in open air markets, something I missed intensely when I returned to the US and was confronted once again by supermarkets. Luckily, I landed in a good spot for a local-food buff. Seattle’s city government has big plans for small farms.

“I’ve always believed that food is a critical part of building a sustainable society,” says Councilman Richard Conlin, the point man on City Council for the Year of Urban Ag. A proponent of the Local Food Action Initiative, Conlin is full of enthusiasm for the improvements the city council is making to zoning laws to benefit backyard farmers.

“You’re permitted to keep goats in Seattle,” he said when I brought up the zoning difficulties urban farmers have faced in places like Kansas City. “Chickens as well. In fact, this year we will clarify existing laws by increasing the number of chickens you’re allowed to keep. Right now they’re classified as a small domestic animal, limiting the permissible number of animals to three, which is obviously hard to do when it comes to chickens. So we’re moving them to a separate category.”

Additionally, laws regulating planting strips in front of residential buildings will be clarified to legalize growing and selling produce. Though raised beds will still require a city permit, residents can plant the grass strips in front of their homes with summer squash and tomatoes to their hearts’ content–and sell what they harvest.

The most ambitious aspect of the Year of Urban Agriculture, however, will be the establishment of new urban farms in Seattle. “The pilot program allows ten live-in buildings to be constructed with flexibility in the land-use code,” says Conlin, “This will allow us to evaluate what regulations need to be changed or established to support sustainable farming in an urban setting.”

While many of the benefits of urban agriculture are intangible–improvements to public health and quality of life, along with a lighter carbon footprint–there are measurable financial perks as well. Aside from creating sustainable jobs in Seattle, the urban ag program aims to help protect the small farms in eastern King County that supply many of the city’s farmers’ markets. By strengthening the relationship between urban and rural communities, the program hopes to expand the local food market, spurring more Seattlites to get their produce from King County farms.

There are encouraging signs that Seattle’s urban agricultural projects may be repeated in cities across the US. “The Local Food Action Initiative has been presented at several different conferences,” says Conlin. “I spoke at the Green Festival last year and got a lot of positive feedback. This is an issue that people are becoming increasingly aware of, and there’s a lot of interest in a fresh approach to food production and community wellness.”

Thanks to plentiful rainfall and rich volcanic soil, Seattle is the sort of place where you can drop a seed on the ground and wake up to a garden. By putting the city’s natural and human resources to work together, the Year of Urban Agriculture promises to make the best use of both.

G. Willow Wilson is an Eisner Award-nominated graphic novelist and prose author. Her articles have appeared in publications including the Atlantic Monthly and the New York Times Magazine. Her first nonfiction book, The Butterfly Mosque, debuts in June 2010. Follow her on Twitter @g_willow Read more >