Referendum on the Deli Menu at Saul’s Restaurant and Delicatessen: What is Tradition? | Civil Eats

Referendum on the Deli Menu at Saul’s Restaurant and Delicatessen: What is Tradition? 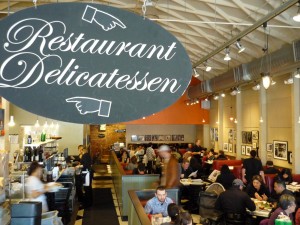 Is tradition ever changing or static? Where does it actually come from? What happens if a tradition is no longer serving its followers or their environment? If these questions sound like they could have been formed in a therapy session about relationship patterns, in a way, I guess they were. We do have a relationship with food (especially when it comes to so-called traditional foods) and it’s not always a healthy one for the planet or for us.

To explore these questions with customers and the community and to start a conversation about what a more sustainable, local, seasonal Jewish deli tradition might look like, Saul’s Restaurant and Delicatessen in Berkeley, CA. hosted a Referendum on the Deli Menu last week.

Why a referendum? Situated just down the block from Chez Panisse (the restaurant with the lead role in remaking our collective food culture and incubator to countless chef alumni, including Peter Levitt), Saul’s stands at a crossroads. The owners don’t want to sell industrially produced meat, sodas with high fructose corn syrup, out of season chilled borscht, and factory pickles. But because Levitt and Adelman serve a cuisine that is steeped in tradition and memory and so associated with comfort, their customers are not always receptive to the foods they want to serve and the changes they want to make.

For example they’ve moved away from that standby of the Jewish deli experience—the giant, industrially produced and heavily subsidized corned beef sandwich in favor of a smaller, more flavorful sandwich made with grass-fed beef from Marin Sun Farms. They’ve replaced Dr. Brown’s soda with housemade sodas in flavors like celery, Meyer lemon, ginger, and cardamom, and switched out the factory pickles for locally made, traditionally fermented pickles. Specials include items like grilled trout with fresh, seasonal vegetables and zhoug, a bold and spicy condiment of Sephardic origin made with cilantro, jalapenos, and cardamom. Saul’s has even stopped carrying salami until they can find an all-beef version that was not made from industrial meats.

But they want to go further and they need their customers to join them.

The changes they want to institute—a more seasonal menu, more sustainably raised, artisan produced meats, the inclusion of more fresh vegetables and foods from traditions other than the Ashkenazi—bump up against customer expectations of traditional Jewish deli foods…and they cost more.

The standard Jewish Deli menu has multiple pages of traditional foods that are often industrially produced, flown in from far away, and not even remotely in season. But because people want their herring when they want it, their chilled borscht, even in January, and yes, those giant corned beef sandwiches, its difficult for restaurant owners like Levitt and Adelman to offer a smaller, more carefully edited menu, in which everything is made from scratch that day.

They dream of a two-page (instead of the current 4-page) menu that allows them to pick and choose from a variety of traditions and offer foods in season.

“We want to move toward a more seasonal menu and let the deli cuisine breathe with the seasons…in which we have everything [in the deli repertoire] but in its time,” said Adelman.

Levitt added, “The chef doesn’t have time to make wonderful specials when they are hauling around a 4-page menu.”

Where do these traditions originate and why are they so fiercely guarded?

“These are foods that are embedded in our souls. We know what we love has some issues…is the meat we are longing for only something that can be produced industrially?” said Evan Kleiman.

“The desire to eat those sandwiches comes from a place of poverty and not having enough….what was chicken soup if not having to make another meal from a chicken you’d killed?” said Willow Rosenthal.

“…and the dumplings were leftover bread,” added Peter Levitt.

“It goes back to the issue of our people and food scarcity,” said Kleiman

So if the tradition was eating what was available and making use of all of it, is what we think of as tradition really something else?

Like many other foods, traditional Jewish deli foods have been commoditized and their ownership has been concentrated among a few large companies.

“What we take as traditional is fairly new…it’s not the deli, it’s postwar America,” said Gil Friend.

Michael Pollan added, “this tradition that we call Jewish deli food and that has seemed unchanging has been revolutionized [by industrial agriculture] over the last 50-years, but a lot of people didn’t notice it.”

Levitt points out that those old Jewish companies are no longer what they were. It’s all nostalgia. For instance, Con Agra now owns Hebrew National. There is one company producing salami. Salami used to vary by city, neighborhood, kitchen. “Now we have one salami,” said Levitt.

Saul’s has had some success gaining acceptance for menu changes by as, Friend said, “offering an alternative that is more satisfying,”

But what about cost? Some people just don’t care enough to pay more for their food.

“We live in a world of hidden subsidies,” said Friend. “If you substitute the concept of the towering pastrami sandwich with a gallon of gas in which you are paying the real price, you’d have a $20 gallon of gas.”

By way of example, Levitt chimed in with a rundown of the different costs of deli meats. Government subsidized industrial meat costs $2 a pound, Niman Ranch, which is not 100% grass-fed or local, but was raised without antibiotics and hormones, is about $4.50 a pound, and locally raised, 100% grass-fed beef is $6 a pound.

So far the restaurant has handled the cost issue by offering smaller sandwiches for a little more money, balancing portion size adjustment and cost. Some customers are appreciative, some less so.

“Saul’s proves it can be done. It’s just more expensive…what they are doing here is important. We’ve figured out how to do sustainable, expensive food. (the customers at Chez Panisse are well-trained…nobody there expects an out-of-season tomato.) When sustainable food hits delis, taquerias, and cafes, that’s when it democratizes,” said Pollan.

I left the talk thinking that Saul’s is taking on a heroic task in redefining the deli menu and asking customers to come along, even if it means giving up some of their favorite foods some of the time. I also left with a mean craving for a pastrami sandwich.

“Jewish cuisine is a Diaspora cuisine and the fact that the cuisine stays the same is not where we came from and not where we are going. Food changes. We have to lead, not react. The cuisine needs to reach back and connect to the past but we need to connect to our future as well. We need permission to do that,” said Adelman.

Afterwards, by way of bestowing my blessing, I did go treat myself to a pastrami sandwich, and when I visited the restroom, I found further evidence of Saul’s commitment to changing the deli. Near the sink hung a nicely framed wanted sign with the following plea:

99% of meat in this country is produced by factory farms.

Help us find salami that is:

Sustainably raised – Protect our air, water and soil from pollution. Reduce petroleum use in agriculture.

Saul’s customers love salami. We have the demand. Help us procure the supply.

Anybody know where I can get a good salami around here?