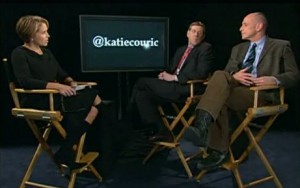 CBS Evening News’ Katie Couric spoke with former FDA Commissioner and author of The End of Overeating, Dr. David Kessler, and Fast Food Nation author Eric Schlosser for her online discussion this week, called @KatieCouric. The topics ranged from portion sizes to school food, the push back from industry on Couric’s segment last week on non-therapeutic antibiotic use in agriculture, and to other issues of food policy and food safety. The discussion is nearly fifty minutes long, and well worth watching. Here are a few highlights:

Couric confesses to complete ignorance about GMOs, asking Kessler and Schlosser to explain the basics. After each of them break down crossing the gene barrier and uncertainty around novel proteins, Schlosser had this to say about GMOs and cloning:

There is the whole issue is informed consent. If you know this is a radical new medicine, a genetically modified medicine, you have the choice whether you will take it or not. My real opposition to genetically modified organisms in agriculture is that its been introduced on a wide scale without any real public debate, and without any labeling…the GMO companies like Monsanto have fought tooth and nail against labeling. The same is true for cloned animals which are now just entering the food supply… if these are such wonderful things, you’d think they’d want to label it.

He later circled back around to this subject, adding:

Ultimately we should be following a precautionary principle. If you are going to introduce new technologies into our food system, particularly if you are not going to label it, the burden of proof that its safe should be on you, the company that is doing it… One of the things that I find most disturbing about genetically modified foods is the farmers who buy, for example, Monsanto seeds, have to sign a document when they do that they will not allow these seeds to be handed over for independent research. There is almost no independent research being done on these genetically modified seeds. I’m not saying that they’re dangerous, I’m not saying that people are going to be getting sick as a result. But we need much more research on the health impacts of these new technologies, and the research should not be done by the companies that are manufacturing them and profiting from them.

Dr. Kessler spoke about the change in the way people are viewing food in this country:

I think there is a movement afoot, and its not fully here, and I think it’s evolving. But I think we realize that understanding where our food is from, making sure its real food, that its not highly processed, I think those are values that will serve us well, not only with regard to obesity, but also what tastes good and what we can enjoy.

Couric’s last question was about realistic solutions to changing the American relationship to food. Schlosser responded by saying, “I’d like to think that getting these food companies on board, and giving them the incentive to produce healthier food, could speed the process up… its not putting [food companies] out of business, its changing their food practices.”

Couric then asked about what incentives they have, and Kessler said, “They’ll change when we change, and when we make known what we want.”

Kudos to Couric for asking basic questions and getting experts on who can explain these very important issues to the general public.

You can watch it all here: