Two Million Angry Moms and One Sociologist: A Review of Free for All | Civil Eats

Two Million Angry Moms and One Sociologist: A Review of Free for All 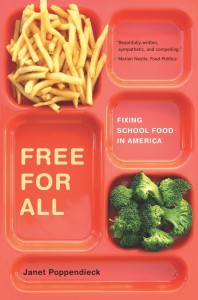 Early in Free for All: Fixing School Food in America (University of California Press, 2010) former Texas Agriculture Secretary Susan Coombs declares that, “it will take 2 million angry moms to change school food.” Based on what we now know of the dreary state of our children’s cafeteria fare, there must be at least that many mamas, as well as a good number of papas who are ready to storm the barricades. Fortunately for them and America’s 55 million students who gulp down something resembling a meal every school day, they’ve been joined by Hunter College sociologist Janet Poppendieck who gives us the best reasons yet for unconditional school food reform.

We are already indebted to Poppendieck for her earlier works Knee Deep in Breadlines and Sweet Charity where she employed her sleuthing skills to unravel the historical contradictions and compounding irrationalities associated with feeding our nation’s neediest citizens. As she did then, Poppendieck combines her talents as historian and sociologist with those of an institutional psychologist to help us get in touch with our nation’s school food neurosis.

Why, for instance, have we developed three different ways to pay the lunch lady–one for the poor students, one for the nearly poor, and one for those who supposedly are being driven in BMWs to school? The logical answer might be because that’s fair; the rich kids should pay more and the government should subsidize the cost of feeding lower income children, as it does currently to the tune of $11 billion annually. But as Poppendieck peels back the layers of the onion, we find the issue has always been less about compassion for needy children and more about accommodating political and commercial interests. Harry Truman (school lunch is good for national security), Ronald Reagan (ketchup is a vegetable), nutritionists and nutritionism (its nutrients that count, not the quality and taste of food), and various agricultural lobbies wanting to unload their farm surpluses are just a sampling of what has driven the school food agenda. Somewhere low on the totem pole you’ll find concern for the health and well-being of boys and girls.

Like any parent, I love to regale my own children with tales of the good old days. I tell them about my high school cafeteria which had exactly one vending machine in the 1960s: a mechanically operated metal box that dispensed a red or golden, uncut, unpackaged and unadorned fresh apple for 25 cents. Far from feeling deprived (my children asked me if my school was the same one attended by Abe Lincoln), we were a healthy and reasonably bright group of young people. But today, vending machines (I once counted 51 in just one Albuquerque, New Mexico high school) are as ubiquitous as dog droppings in the melting snow. What has happened during the intervening decades?

Poppendieck’s jargon-free narrative takes us step-by-step through the deals, concessions, and compromises that have bureaucratized the school food process while simultaneously dumbing down the food. Why is so much processed food used to prepare school meals? Because it’s cheaper and “cooking from scratch” kitchens have been removed from the schools. Why does it have to be cheaper when we’re talking about feeding our children? Because the federal government (or anyone else for that matter) will not provide enough funding to enable schools to buy fresh, whole ingredients. (And by the way, taxpayers are spending billions of dollars to subsidize corn and soybeans, the prime ingredients in processed food.) Why do we have so many junk food items sold “a la carte” in our schools? Well, in addition to using a French culinary phrase to disguise what is otherwise crappy food, schools must sell these items to those with discretionary cash–supposedly the ones in the BMWs–to compensate for the low reimbursements they receive for meals that meet mandated USDA standards. And on it goes.

Perhaps what I found most astonishing, and central to Poppendieck’s thesis, is the evolution of the three-tiered payment system. While the free, reduced-price, and full-pay categories are the “wins” secured by anti-hunger advocates over many years of legislative battles, Poppendieck argues that the cure may have been worse than the disease. The high cost of determining student eligibility, the administrative reporting burdens imposed by USDA, and of course, the stigma that falls on poor students exacts a high toll. On this last point, Poppendieck has this to say: “The biggest problem is the stigma that comes from being different, from being marked as poor, from being unable to pay in a culture that places excessive value on being able to pay.”

Poppendieck has a solution that is as elegant as it will be hard to achieve–universal free meals for all students K through 12. She acknowledges the cost, an additional $12 billion per year (our present wars, please note, are costing about the same amount each month) that would not only feed all students for free, but also improve the quality of the food.

If the arguments for universal school meals–efficiency, equity, no one excluded–sound eerily familiar, then you’ve probably been paying attention to the arguments for universal health care. If nothing else, it’s certainly ironic to consider the consequences of removing each system’s respective middlemen: processed food purveyors for school food, and private health insurers for health care. Might we all be healthier as a result?

In a long chapter called “Local Heroes” Poppendieck acknowledges the pioneering work of many innovative school food directors like Ann Cooper, as well as movements to connect schools to local farms and even create school gardens. These and others have made important contributions, she says, but they all need to be “scaled up” by becoming institutionalized (my word choice here would be “naturalized”) into the system. This by the way is the role of public policy, and it is why every one who cares about what our children eat should be in touch with their members of Congress.  The future of school food will be decided in the 2010 Child Nutrition reauthorization now before Congress.

Free for All is well researched and written. While Poppendieck studies her subject with the thoroughness of a sociologist, fortunately she doesn’t sound like one. We are treated to a careful review of the facts that flow through a lively and personal narrative. The reader is kept closely by her side as Poppendieck travels through school cafeterias and pores over government reports. Along the way we observe, touch, and taste what 55 million American children consume each school day. Most importantly, she tells us why it’s the way it is, and how, if we could somehow put ourselves in the little shoes of people smaller than us, we would do everything we could to make it better.