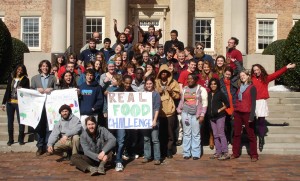 When was the last time you went to a conference that followed dinner with a rock, paper, scissors tournament among 150 participants?  At times the 2nd annual Southeast Youth Food Activist Summit (SYFAS) felt more like summer camp than a conference (in a good way).  Don’t be mistaken though; we got down to business.

SYFAS is the first of six Real Food Summits that will be happening over the next two months across the country as part of the Real Food Challenge, a student movement to increase the procurement of real (sustainably grown, fair, humane and local) food on college and university campuses, with the national goal of 20% real food by 2020.

The summit kicked off with a keynote address by Anna Lappé.  She spoke about how far student food activism has come and shared an anecdote about her activism in college, how she and fellow students convinced the campus dining service to trade individual cereal boxes for bulk cereal dispensers.  In contrast, the Real Food Challenge’s goal would direct an estimated one billion dollars annually in campus food spending toward real food by 2020.  In regards to this goal, Lappé asked a very real and pressing question.  “How do you get a school feeding 30,000 people transitioned to real food?”  There’s no easy answer to this but it was one of the major questions that the participants grappled with over the course of the summit.

UNC Chapel Hill’s FLO (Fair Local Orgainc) Food group, the hosts of the summit, have worked on increasing the availability of real food on campus for two and a half years.  They’ve established a good rapport with Carolina Dining Services (CDS), organized events to raise awareness about where our food comes from, and have managed to get cage free eggs and local grass fed beef into the dining halls.  One major challenge that they’ve faced is sourcing sustainable local meat and produce in the quantities that CDS would need to serve thousands of meals a day.  There are a multitude of sustainable small farms in the region but few that could produce in quantities large enough for CDS.  Of those even fewer are willing to sell at wholesale prices when they can get substantially more by selling retail through local farmers’ markets.

Scott Marlow, Director of Farm Sustainability at the Rural Advancement Foundation International who spoke at several sessions during the summit had an intriguing point of view:

As we grow local food we’re going to have to grow beyond the very small scale farms that pioneered local food into mid-scale agriculture.  Mid-scale agriculture is exactly where we’re losing farms, farmers and farmland the fastest.  So the big question is, how do we help the mid-scale farm transition to these new and exciting and rapidly growing markets fast enough before we lose them?

And what keeps the mid scale farms from transitioning to sustainable agriculture? He said, “[crop insurance is] the biggest barrier to the mid-scale farmers moving into higher value markets and higher value products that are represented by local foods…and these are the people that you need to sell into universities it’s not those small guys.”  They can’t get crop insurance on the higher value products and therefore they can’t get loans from the bank.  Scott will be the first to tell you that working on crop insurance isn’t sexy, but it’s important work if we want to see more sustainable local food in large institutions.

David Schwartz a member of the RFC’s National Administrative Team believes that “if the universities make the commitment [to procure real food], people will figure out how to fill the demand.” The whole University of California system in fact has committed to procuring 20% real food by 2020.  Iowa State University has set a goal of 35% real food by 2012.  For the purposes of the Real Food Challenge, the minimum standard to qualify as real food is that it meet one of the four criteria (sustainably grown, fair, humane and local) but preferably two.  This makes their goal feasible while still exerting pressure on the food service providers.  As they find success, they can increase their real food percentage goals and intensify their criteria.

In the mean time, it is great to see students continue to create alternatives to the centralized dining services with more flexibility to serve real food.  The Oberlin Student Cooperative Association (OSCA), a student run organization at Oberlin College, feeds 620 students in 9 different co-ops while Earthfoods Cafe at U-Mass Amherst is an example of a student run co-op restaurant, both of which offer affordable, healthy alternatives to the campus meal plans.

So I guess there’s no single answer to Anna Lappé’s question about transitioning these large institutions to real food.  There are a lot of strategies, angles, and pressure points that we can push to move in the direction we want to go.  The Real Food Summits are a great opportunity for folks to come together and share their strategies for creating change in the food system.  It doesn’t matter where you start;  Anna Lappé started with cereal boxes.  Start where you are.

Before I go, I would be remiss not to mention the food at the food summit. Attendees enjoyed two amazing dinners catered by Vimala Rajendran featuring local greens, sweet potatoes, and butternut squash from Eastern Carolina Organics and pastured pork from Cane Creek Farm.  Vimala has hosted weekly community dinners out of her home for over 13 years that routinely draw over 150 people (including many students) and are sustained by a pay-what-you-can donation system.  Folks in North Carolina should keep their eyes peeled because after years of prodding by fans, Vimala has plans to open a restaurant called the Curry Blossom Cafe in downtown Chapel Hill a short walk from campus.

Rob Jones is a radical educator and food activist in Carrboro, NC working to make sustainable food accessible and affordable by empowering communities to grow food. Rob organizes Crop Mob a group of young, landless, and/or wannabe farmers that works collectively and builds community within sustainable agriculture. He is a fellow with Good Work; a social entrepreneurship and community development non-profit Read more >