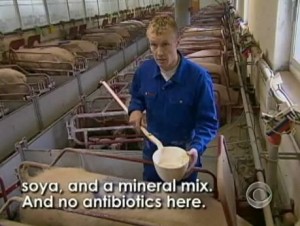 Katie Couric’s special report on the use of antibiotics in animal agriculture aired in two parts this week, exposing the intransigence of the industry.

In the report, Couric visits a confinement pig operation, where she speaks to a farmer who believes using antibiotics is necessary. She talks to victims of MRSA, a bacteria infection that is resistant to antibiotics. And she visits similar hog confinement operations in Denmark that are taking care of their animals without the use of antibiotics. The Danish are proud to have transitioned, and scientists go on the record to talk about the decrease in antibiotic resistance in humans since the ban in that country. At the end of the second segment, Couric is in a giant broad-breasted white turkey operation that has been antibiotic-free for 14 years–a barn filled with hundreds of birds that I would describe as crowded, and yet the farmer has managed to turn a better profit than he did using antibiotics.

Meanwhile, a veterinarian from the National Pork Board denies that antibiotics are being overused, and argues that costs for the farmer go up prohibitively when animals are given more space and not given antibiotics, and framed the cheap cost as a benefit for the consumer. However, at an extra cost of .05 cents per pound, Dr. Ellen Silbergeld argues its a price worth paying. What the National Pork Board neglects to mention is that on average, the consumer is willing to pay .20 cents more per pound for pork without antibiotics, increasing profits for farmers.

Farmers running these huge operations are in a difficult position, pinched by small margins and industry contracts that force them into debt to meet standards for confinement operation barns and equipment. They need more help to understand why the transition to antibiotic-free is actually better for them financially and health-wise in the long term.

Couric also interviews Dr. Joshua M. Sharfstein, the principle deputy commissioner of the FDA, who said, “The overuse of antibiotics on farms does pose a risk to human health.” He also spoke strongly for a ban on non-therapeutic antibiotic use in hearings on Preservation of Antibiotics for Medical Treatment Act (PAMTA).  Perhaps Couric’s reporting will give congress an additional push to pass PAMTA.