Fed Up with School Lunch: The Feds Join The Fray | Civil Eats

Fed Up with School Lunch: The Feds Join The Fray 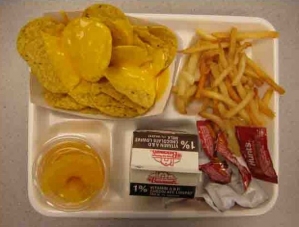 Many kids in the U.S. eat half their daily calories at school. And what a sad, super-size me state of affairs that is in most parts of the country. Highly processed and packaged food laden with sugar, fat, and salt fill in for whole grains, fruit & veg, and protein — you know, the kind of nutrients that might actually help a child learn and stay lean.

Loads of folks have been working their buns off to try and make schools a healthier place for children to eat. Check out Ann Cooper, the self-styled Renegade Lunch Lady, who revamped school lunch programs in Harlem, NY, Berkeley, CA, and now Boulder, CO. Or visit Slow Food U.S.A.’s Time For Lunch Campaign, or Susan Rubin’s Better School Food. And yes, for the record, we know we’re spoiled here in Berkeley with our made from scratch, fresh ingredients lunch menu. We also know what’s going on here is the exception, not the rule.

But maybe that’s about to change. Yesterday, as part of the federal government’s “Let’s Move” launch, the First Lady’s much buzzed about campaign against childhood obesity, Michelle Obama announced plans for a renewed effort to raise the quality of school food, feed more kids, and feed them better.

White House watchers know that the Administration recently called for an additional $10 billion over 10 years to improve school food and increase participation in school nutrition programs. Congress must green-light this request, of course, before it’s a reality. More money is needed, and lots of it, but new thinking about what nourishment looks like at lunch is necessary, too. Think less processed, packaged edible food-like substances and more fresh, real food.

These government efforts may seem like too little too late to critics. But they can’t come soon enough for people like Mrs. Q, the anonymous school teacher from an unnamed Illinois public school who has vowed to eat the same school lunch offered to her students throughout 2010. Granted, Fed Up: The School Lunch Project sounds like another food blog gimmick, but this teacher has hit on a simple but surefire way to draw attention to the deplorable state of school lunch in her workplace, one bad lunch at a time. And she’s perfectly positioned to give the rest of us the insider scoop.

She believes a lousy school lunch has many downsides for kids who:

Mrs. Q wants to keep a low profile; she fears she may lose her job if she’s outed. But I will check in with her towards the end of the school year to find out first hand what conclusions she draws from her school food experiment. For now, you can read her insightful interview with Robin Shreeves at Mother Nature News.

While it’s unlikely that this presumably underpaid teacher will make a small fortune on a book deal or movie rights for her efforts on behalf of school kids, she may get an invite to the White House.

So might Ed Bruske, who could likely walk over, since he hails from D.C. The Slow Cook blogger recently spent a week in an elementary-school kitchen in the nation’s capitol–and it’s not a pretty picture there either. Bruske documents a daily menu of industrialized school food that’s cheap, fast, and easy to dole out to the masses. Tellingly, kitchen staff spend more time cleaning up and serving than they do prepping or cooking food, writes the former Washington Post reporter in the first of his six-part series. He also recounts witnessing such edible atrocities as so-called scrambled eggs, “a manufactured product with 11 different ingredients cooked in a factory in Minnesota and delivered 1,100 miles frozen in plastic bags to the District of Columbia.”

Clearly, the Feds have their work cut out for them. Clearly, good folks are keeping tabs on them. Clearly school lunch made in the U.S.A. needs a massive makeover. 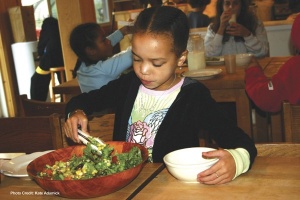 In France, Italy, and Japan, and elsewhere around the globe, children do eat well at midday, notes Deborah Lehmann at School Lunch Talk. Even here, as this child tucking into salad in a New York City school illustrates.

The question remains:  Can Michelle Obama and her crew address childhood obesity, school lunch, and food security in all of the communities across the U.S.?

Can she do it?

The survival, literally, of the next generation of American kids may well depend on it.