Sprouts Cooking Club: Growing the Next Generation of Chefs 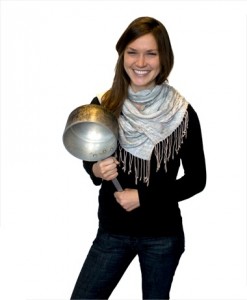 It took a teenager from Wyomissing, PA who had never heard of Alice Waters to figure out what was missing on the culinary scene in Berkeley.

When Karen Rogers landed at UC Berkeley in 2005 she couldn’t believe that there wasn’t a cooking club on campus.  So she started one.

But the Cal Cooking Club wasn’t just about student potlucks, recipe exchanges, and cook outs. Drawing on her success in high school with a similar program she spearheaded, Karen made it her mission to forge relationships with local chefs. (Presumably she learned who Alice was pretty quickly.)  She invited culinary professionals on campus to teach cooking classes and took club members into local kitchen restaurants.

She even arranged a “Big Cook-off” between Cal and Stanford, tapping into the simmering rivalry between the schools. (Cal prevailed at the pots.)

Today, the culinary arts club has some 600 members, making it one of the largest clubs on campus, according to Karen, who graduated last year and resigned from presiding over the group in 2007 to focus on launching a local food-oriented business.

And what a thriving biz it is. While still in school, the international business major kicked off Culinary Kids (which has since morphed into Sprouts Cooking Club) for the next generation of chefs in Berkeley and beyond.

The organization allows Karen, 23, to pursue her passion for good food and fills another void in the Gourmet Ghetto’s food chain by offering young children the opportunity to cook real food with real chefs in real kitchens. “I enjoy working with kids because of their raw enthusiasm, open-mindedness, and fascination with food,” she says. 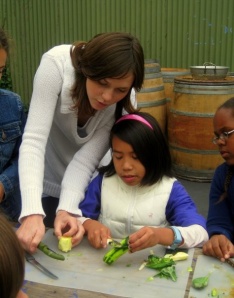 Not surprisingly, her classes fill quickly. For the past three summers, Karen has corralled young campers, ages 7 to 13, in and out of some of the fanciest restaurant kitchens in the Bay Area, including Chez Panisse, Boulevard, and Slanted Door. And these kids aren’t just baking cookies. They’ve made butternut squash ravioli with chef Cindy Deetz at Venezia, whipped up hummus at La Mediterranee, and learned how to “cook” raw at Cafe Gratitude, where they made an unbaked avocado chocolate cake. (You can read about the culinary adventures of one of her students, Sam Siegel, in an earlier post I wrote.)

Prior to graduation, Karen spent time abroad, living in France and Japan; she also found time to squeeze in an internship at Chez Panisse.  In all three locations she worked in restaurant kitchens where the emphasis was on eating locally-sourced food cooked from scratch. She’s also volunteered on a farm in Ecuador, taken cooking classes in Peru, and toured coffee farms in Costa Rica to learn about fair trade and organic farming. These experiences, coupled with her family background — at one time her mom ground her own wheat and made bread for the family of 9 — informs the slow-food, sustainable, authentic cooking sensibilities she hopes to pass on to her young charges.

Sprouts receives sponsorship from Whole Foods, Straus Creamery, and Alter Eco Fair Trade.  The group also partners with Kaiser Permanente, offering healthy meals cooking series targeting employees and their families. As a non-profit, Karen reaches out to a diverse group of kids in the community; she offers scholarships to families in need for camps and series classes, teaches cooking in Oakland schools and at the Senaca Center, a live-in treatment facility for emotionally-challenged children in Concord.

The trip to France is intended to give children and their parents first-hand experience in the culinary and cultural mores of another corner of the globe. “People in France don’t have big refrigerators or large supermarkets,” Karen notes. “Instead, they regularly visit their patisserie, charcuterie, and market and have relationships with the people who grow or make their food. It’s a completely different approach to the culinary arts that I want to expose the kids to.”

Accompanying her on this culinary tour is Jed Cote, sous chef of Pizzaiolo, and former line cook at Chez Panisse, who is very familiar with Provencale French cooking and rustic Italian fare but has never left the country. Armed with his recently acquired passport, Jed, 32, is keen to convey to the kids the pleasure of cooking, along with teaching them knife skills and how to make the perfect crepe.

Jed, who has a degree in criminology, planned on becoming an FBI agent, until every single person he interviewed who chose that line of work told him they regretted their decision. “So many people hate what they do. I think it’s important for children to see an adult who loves what he does,” he says. “I get up every day and go to a job that I love. I think that’s a really important message for children to learn.”

At a benefit brunch for Sprouts’ scholarship fund yesterday at Pizzaiolo, parent Czarina Good explained why she was taking her three children to France. “I see it as part of their education,” says Czarina, originally from the Philippines, whose children attend Chinese school. “I want my children to grow up knowing about all the different people and places of the world and food is a wonderful way to do that.”

For upcoming class series and information on summer camps (heads up: these fill fast), visit the Sprouts Cooking Club website.