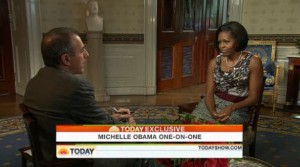 One of the advantages we enjoy here in Iowa is that we get to see our presidential candidates and their families up close and personal during our caucus process.  While I had seen then-Senator Obama give that stirring speech at the 2004 Democratic Convention, it was really a speech here in Iowa by his wife Michelle that made me a fan of his.  I figured if a lady this smart and classy married him he must be worth a look.

Many of us foodie-activist types were excited when Barack Obama was elected because we believed that maybe finally something could be accomplished for our agenda of “Good, Clean, and Fair” food for everyone.  Sure enough, that first spring there was the First Lady out there planting an organic garden on the White House grounds.  Say what you will about their former opponents, no one could imagine Cindy McCain doing anything even remotely similar.

So now a year has gone by and Mrs. Obama is launching a childhood obesity initiative the way such things get launched these days, on NBC’s Today Show.  It’s tradition for FLOTUS to have a cause such as this, and these causes are almost always worthwhile: literacy, homelessness, “Just Say ‘NO!’” etc.

Mrs. Obama’s initiative is no exception. The statistics are alarming–1 in 3 American children born in 2000 or after will develop diabetes before they are old enough to vote. Among minorities that ratio rises to 1 in 2.  There is no health system that can hope to cope with the implications of that no matter what her husband and Congress manage to accomplish.

So this week Michelle was on with Matt Lauer discussing the importance of feeding children healthy food (the formal launch of her initiative will be next week), and her official chef-partner in the effort, Sam Kass, was in a separate segment talking with the once-overweight Al Roker and preparing breakfast with some adorable school children.  Both of these clips were the appropriate kinds of fluff Today Show audiences are seeking first thing in the morning, but they managed to touch on vital issues: startling obesity rates, related health issues, education of our children, cooking and eating together as families, and our nations future.

A Today Show poll found that 52% of respondents “applauded” Mrs. Obama’s efforts.  Presumably Caitlin Flanagan is not among them, but I really wonder about the other 48%.  In my experience talking about these issues, the argument that comes up again and again (and again – humorously – in this recent episode of the NBC sitcom Parks & Recreation) is the old saw “I don’t want the government telling me what to feed my kids.”

Sadly though, while this is not what Michelle is trying to do, the government has been telling us what to feed our kids, very successfully, for decades.  And nearly all of it is crap.  Here I do not mean the 4 food groups I grew up with, or the food pyramid my kids learned in school.  I mean the millions of tons of federally subsidized carbohydrates and fat shoveled at our children every moment of every day through school lunches, drive-thru windows and the media.

In his recent budget President Obama proposed increasing the federal contribution to school lunches by 20 cents per meal.  While any increase on this line of the budget is welcome, we need one at least 5 times that size if he really wants to help his wife’s cause, and it needs to be specifically earmarked for fresh, local, sustainable food.  He could designate an additional $50 million to support existing (and create new) farm-to-school initiatives, and he could support removing junk food from vending machines in our schools.

You can help too, by signing on to this petition, supporting its goals, and writing or calling your congressional representatives to demand that they stop using our children as Dumpsters for Big Ag’s chemical-laden, federally-subsidized, fat-and-sugar-filled surplus.  They may be your kids, but they are our future.

WATCH: Michelle Obama and Sam Kass on the Today Show: