Finding Inspiration in a Recipe Box 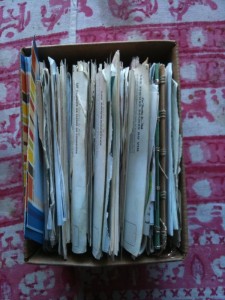 It was a blessing in disguise, one of many construction zone disasters that actually resulted in triumph.  One recent morning I walked into the only room that remains somewhat set up for day-to-day activities during our total DIY home remodel, sectioned off by hanging canvas tarps, gutted walls, electrical wires, naked bulbs and lots of dust, and on the floor lay splinters of wood and scattered index cards.  It looked like a crime scene from the movies, someone looking for my secret papers, but instead was my old, neglected recipe box that had tumbled off its absent-mindedly placed location on the highest shelf.

What was it doing way up there, and why would someone who centers her life on food in every way put it in such a hard to reach location?  Well, despite my enormous love of food, eating, and cooking, I have to admit to rarely using recipes.  My large collection of cookbooks, currently all packed away tightly in various sheds, are just that, a collection, more observed and admired from afar on the shelf than actually busted into and utilized.   I’ve even tried to make deals with myself, like starting a new habit of using Sunday night as recipe night and exploring the wealth of information that lies dormant on the shelf, but to no avail.  The recipe following habit just won’t stick.  My cooking style, and sometimes even baking style, is loose, whimsical, intuitive, vacillating with what is around, what I’ve learned and what my mood is more than by direction.  So the answer to why my recipe box sat in such an inaccessible spot is simply because I never look in it.  In fact, I almost forgot I had it.

But that fateful morning, as I gathered up the mess on the floor like a dropped deck of cards, I realized that it was about time to reorganize.  Over the course of the next few days I sorted through my recipes section by section, an assortment of neatly copied cards, Xeroxed magazine pages, printed online articles and of course, the requisite bits and pieces of ripped out newspaper clippings yellowed over time.  And as I snickered over why in the world I wrote down so many tofu recipes or low carb desserts I also caught my breath at the sight of my grandmother’s handwritten bunt cake instructions or her secret salad dressing that I wrote down while she dictated to me on one of the very last times she made it for our family.  What was initially an unwelcome housekeeping chore turned into an unexpected opportunity to meander through my personal food past.  It was a way to examine my own edible journey and in a larger sense, delivered snippets of time.  I flashed on scenes otherwise forgotten; my grandmother’s hand as she tipped the spice jar over her large wooden salad bowl, the record playing in the distance when I copied my best friend’s favorite chili recipe, my excitement at finding the ingredients to the best chai in the world from the vegetarian restaurant I worked at through college.  Every single item stuffed within that old pine box opened up a moment, and despite how relevant or appealing the actual recipe was that I came across, the simple fact that it called to me in some way at some point in time was what made each one special.  Through this food-focused lens, it provided retrospection and offered illumination about how I was feeling, what I was doing, and what was important to me over the years.

Since that day of destruction and rediscovery, I have actually followed a few recipes that had otherwise lay dormant.  Last weekend was honeyed sweet potato biscuits and when the recent storms blew and thundered by, I was kneading up some Slurry Bread, a classic go-to from the farm I lived and worked at after college.  Perhaps next I will chunk away at the dozens of brownie recipes I seem to impulsively acquire or finally make those New York Times chocolate chip cookies.  And maybe my experience will inspire you to take a gander at what lies within your own collection of recipe memories…

Straight out of my vast cookie recipe section, these ones are perfect for heating up a cold winter night.

Sift together flour, cocoa, spices and salt.  In a separate bowl, cream butter and sugar until fluffy.  Add egg and vanilla and combine thoroughly.  Mix in dry ingredients until just incorporated.  Refrigerate dough for about 30 minutes.

Preheat oven to 350 degrees.  Pinch off pieces of chilled dough and roll into 1-inch balls.  Place on a parchment lined cookie sheet about 2 inches apart.  Press a fork dipped in flour or cocoa powder firmly into top of each cookie to create a criss-cross pattern.  Sprinkle with extra sugar if desired.  Bake 9-10 minutes, being careful not to over bake.  Remove to rack and cool completely.