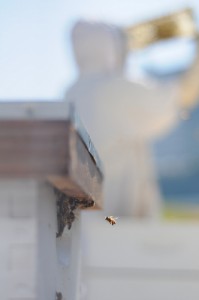 New York City urban beekeepers (and lovers of honey, fruit and flowers): tomorrow is the big day to let your legislators know that you want beekeeping to be a legal activity by giving an oral testimony at the public hearing on the issue between 10am-12pm, 125 Worth Street, Room 330.

Beekeeping is currently illegal under the health code of NYC, which prohibits the possession, keeping, harboring and selling of “wild animals” and “venomous insects.” However, beekeepers are becoming commonplace in cities across the United States. These cities have realized that bees are essential to a thriving natural environment, including as a support to urban vegetable gardens.

Just Food, an organization that seeks to expand access to healthy food to all New Yorkers, has spearheaded the campaign to get this antiquated law changed. Nadia Johnson from Just Food sent over some of of the organization’s testimony. Hopefully it will inspire you to come along and speak your mind on this important subject:

Just Food supports the Department of Health’s proposed amendment to Article 161 of the NYC Health Code regarding honey-beekeeping in New York City. Lifting the ban on honey-beekeeping is essential to a green, healthy, sustainable city.

As a local organization that works to increase access to fresh, healthy food in New York City and to support the local farms and urban gardens that grow it, honeybees and beekeepers are vital to our mission.

With the crisis of Colony Collapse Disorder, it’s never been so important for all communities—urban and rural—to promote beekeeping. Beekeeping is legal in cities throughout the country—including Atlanta, Chicago, Dallas, Denver, Minneapolis, Portland, San Francisco and Seattle. Even government sites such as Chicago’s City Hall and the White House’s South Lawn has honeybee hives.

Beekeepers in New York City—past, present and future—play a vital role in ensuring our city is greener, healthier, and sweeter. The proposed amendment to Article 161 would bring New York City up to speed with cities around the country