We Need a Food Revolution: Oprah with Michael Pollan (VIDEO) 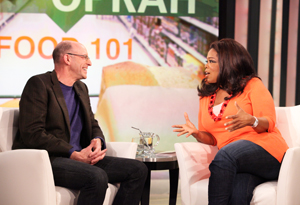 On Wednesday, Michael Pollan appeared on Oprah to discuss the food system and the film Food, Inc. At the beginning of the program, entitled “Before You Grocery Shop Again: Food 101,” Oprah said that she saw Food, Inc., and it inspired her to host this discussion. “We all have to start paying more attention to what we’re putting in our bodies,” she said. “Do you know where you food really comes from? What’s been added, what’s been taken out? What goes down before they put a label on it?” Interspersed throughout the show were clips of the film, including the film’s introduction on the disconnect between our idea of food production and its reality; chicken production, featuring a farmer speaking out against the industry; and a family that can’t afford to eat real food and is forced to choose fast food.

When Oprah asks Pollan what he eats, and he speaks in favor of cooking: “I think cooking is really key because it’s the only way you’re going to take back control of your diet from the corporations who want to cook for us,” he said. “The fact is, so far corporations don’t cook that well. They tend to use too much salt, fat and sugar—much more than you would ever use at home.” The best line in the program came from Oprah: “We need a food revolution, because people want the corporations to cook for them because it all boils down to convenience.” Pollan agreed, saying that when you understand what it takes to make the food we are currently eating, “you lose your appetite.”

Oprah later asked Pollan if he eats meat, and he talks about being “picky” about the meat he eats and making sustainable choices, saying “I don’t eat feedlot meat.” Oprah then provoked a laugh by asking “you’re not worried about saying bad things about beef?” referring to the lawsuit filed against her by the beef industry 1996. (That episode focused on mad cow disease, and one of her guests described the industry’s practice of feeding processed livestock back to the cows, to which she responded to by saying that it “just stopped me cold from eating another burger.”)

The full episode is worth watching, and we’ve posted the available videos from around the web below:

…which gets cut off, and the ending is very worth watching: