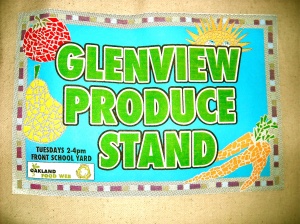 Care to sample a strawberry or scoop up salad greens for supper when you pick up your child from school? Since school went back last September you can do just that every Tuesday at Glenview Elementary School in Oakland, California.

Led by garden coordinator and parent Delana Toler, a small core of volunteers — some without kids at the school — work a PTA-initiated produce stand for two hours after classes are dismissed in the front yard of this public school, which serves a diverse group of families in the foothills east of Lake Merritt.

Unlike Windrush School farm stand profiled here previously, Glenview’s goal isn’t to raise school funds by selling produce. Instead, this stand serves simply to educate parents, students, and staff about seasonal, organic fruits and vegetables, and offer such produce at competitive prices, thanks to the generosity of Farmer Joe’s, a natural grocery store in the community, which supplies the stand at close to cost. (The grocer has also donated a greenhouse for the school garden.) 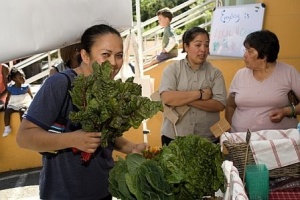 Parent volunteer Mark Halmi mans a tasting table to encourage folks to try unfamiliar produce. Last week Mark sauteed Swiss chard with garlic and raisins; a recent tasting made purple potato converts out of many pupils and their parents.

There’s a free piece of fruit to any child who comes equipped with a reusable tote to take produce home. (The PTA received a grant to distribute a Glenview produce bag, complete with an eye-catching mosaic design, above, to every child in the school.) Last-minute gleaners snap up whatever produce is left after most folks have long gone home.

On a visit last Tuesday I picked up a punnet of raspberries for $3.89 (they currently retail for $6.99 at my local grocer), along with rainbow chard, kiwi fruit, Arkansas black apples, and French fingerlings. Delighted that my son has recently discovered potatoes, these creamy tubers were delicious thinly sliced, sauteed & seasoned.

Depending on the season and the variety of local, organic produce available, Delana spends between $300 and $500 to stock the stand each week. And the better part of her Tuesday is consumed with stand duties.

Delana grew up on a farm in Oregon; pretty much everything the family ate came off their land. She sees the school’s vegetable garden and produce stand as a way for kids in more urban settings, including her daughter Dylan, to connect with food and where it comes from. 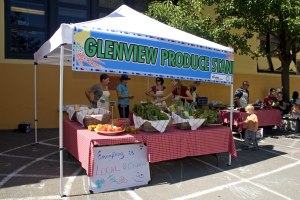 On a recent visit one teacher opened a window and called out: “I’m ready for you to take my order.” If principal Deitra Atkins can’t stop by the tasting table a sample is delivered to her office. Parents and kids cruise pass as school gets out with bags in tow.

Glenview is one of 10 farmers’ markets opened this fall in Oakland public schools. The other stands, the result of a partnership between the school district and East Bay Asian Youth Center, are mainly located in low-income areas in so-called “food deserts,” parts of the city in which fresh fruits and vegetables are hard to find, writes reporter Katy Murphy in a recent story for the Oakland Tribune.

What do you think of such programs operating on school grounds? At a time when school gardens in California have come under attack from some pretty snarky quarters, I’m curious to hear what others have to say about schools getting into the business of growing and selling food on campus.

(For a well-reasoned rebuttal to The Atlantic’s “Cultivating Failure,” penned by the frequently contrarian Caitlin Flanagan, check out this Civil Eats story by slow food chef Kurt Michael Friese.)

Given my background, perhaps I’m biased, but I see tremendous benefits in an edible education and few downsides to feeding kids fresh food.