Booker T. Washington on School Gardens and the Pleasure of Work | Civil Eats

Booker T. Washington on School Gardens and the Pleasure of Work 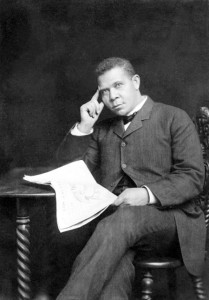 With the publishing of her article in the latest issue of The Atlantic, Caitlin Flanagan became a lonely detractor of the school garden movement. There has been much refuted about the piece, but I wanted to focus here on her obvious detestation for physical labor. Flanagan seemingly didn’t speak to any immigrants with children attending the King School, home of the country’s well-known Edible Schoolyard, but chose to imagine the immigrant experience all the same, taking us through a hypothetical situation in which a farm laborer’s child there is taken out into the “hot sun” of the school garden and made to pick lettuce. She asked, “Does the immigrant farm worker dream that his child will learn to enjoy manual labor, or that his child will be freed from it?”

Having experienced the satisfaction of my own labor, I do not accept that physical work has no benefits for adults or kids. Furthermore, labor will never be eliminated completely from human affairs. Perhaps hearing about the experience of labor from the point of view of a former slave, then, could be instructive. One commenter on Kurt Michael Friese’s thoughtful rebuttal (“Not “enjoy,” Ms. Flanagan, respect.”) suggested that Flanagan should read Booker T. Washington’s 1904 book, Working With the Hands. Washington was born into slavery, of an African American mother and a white father he never knew. He argued that physical work brings us closer to nature, empowers us and fulfills us in ways that working with the mind alone cannot. He described his own experience in the introduction:

Soon after I was made free by the proclamation of Abraham Lincoln there came the new opportunity to attend a public school at my home town in West Virginia. When the teacher said that the chief purpose of education was to enable one to speak and write the English language correctly the statement found lodgment in my mind and stayed there. While at the time I could not put my thoughts into words clearly enough to express instinctive disagreement with my teacher this definition did not seem adequate, it grated harshly upon my young ears and I had reasons for feeling that education ought to do more for a boy than merely to teach him to read and write.

While this scheme of education was being held up before me my mother was living in abject poverty lacking the commonest necessaries of life and working day and night to give me a chance to go to school for two or three months of the year. And my foremost aim in going to school was to learn ways and means by which I might make life more endurable and if possible even attractive for my mother. There were several boys of our neighbourhood who had superior school advantages and who in more than one instance had reached the point where they were called ‘educated,’ which meant that they could write and talk correctly. But their parents were not far removed from the conditions in which my mother was living and I could not help wondering whether this kind of education alone was fitted to help me in the immediate needs of relieving the hard times at home. This idea however ran counter to the current of widespread opinion among my people. Young as I was, I had come to have the feeling that to be a free boy meant to a considerable extent freedom from work with the hands and that this new status applied especially to the educated boy.

He goes on to describe his first job, as a gardener for a wealthy woman. She respected his hard work, and encouraged his schooling. And he developed a satisfaction with the results of his labor:

Above all else I had acquired a new confidence in my ability actually to do things and to do them well. And more than this I found myself through this experience getting rid of the idea which had gradually become a part of me, that the head meant everything and the hands little in working endeavour and that only to labour with the mind was honourable while to toil with the hands was unworthy and even disgraceful.

…While I have never wished to underestimate the awakening power of purely mental training I believe that this visible tangible contact with nature gave me inspirations and ambitions which could not have come in any other way. I favour the most thorough mental training and the highest development of mind but I want to see these linked with the common things of the universal life about our doors.

Later on in the book he writes specifically about gardens, and their role in education:

My own experience in outdoor life leads me to hope that the time will soon come when there be a revolution in our methods of educating children, especially in the schools of the smaller towns rural districts. I consider it almost a sin to take number of children whose homes are on farms, whose parents earn their living by farming, cage them up as if they were so many wild beasts for six or seven hours during the day in a room where the air is often impure.

I have known teachers to go so far as to frost the windows in a school room or have them made high up in the wall or keep the window curtains down so that the children could not even see the wonderful world without. For six hours the life of these children is an artificial one. The apparatus which they use is as a rule artificial and they are taught in an artificial manner about artificial things. Even to whisper about the song of a mocking bird or the chirp of a squirrel in a near by tree or to point to a stalk of corn or a wild flower or to speak about a cow and her calf or a little colt and its mother grazing in an adjoining field are sins for which they must be speedily and often severely punished. I have seen teachers keep children caged up on a beautiful bright day in June –when all Nature was at her best making them learn or try to learn a lesson about hills or mountains or lakes or islands by means of a map or globe when the land surrounding the school house was alive.

…I believe that the time is not far distant every school in the rural districts and in the small towns will be surrounded by a garden and one of the objects of the course of study will be teach the child something about real country life and about country occupations.

On this day honoring Martin Luther King, Jr., let us not forget our civil right to eat good food, and thereby keep our bodies strong and healthy. One way to overcome the inequalities which keep the poor eating the processed foods that are making us sick is by re-valuing labor, and rekindling a respect for the farmers that cultivate our food. Only then will we have enough farmers to produce the fruits and vegetables needed to improve our nation’s diet at an affordable price.