A Season of Abundance | Civil Eats

A Season of Abundance 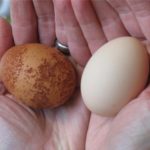 The dead of winter may seem to be an odd time to declare to be in full flush, but here we are sitting pretty with more eggs than a household of three can handle. After a harrowing seven months in which we lost the majority of our chickens, we have recovered in aces. Quiche anyone?

This past May, we began our urban chicken experiment with three birds purchased from a lady near Petaluma, the egg capital of the world. She had the best variety of rare, heritage breeds around and I wanted “pretty” chickens, not those run-of-the-mill feed store varieties. Hey, don’t judge! I live in a tragically hip city and need to keep up appearances. But seriously, once I was made aware of the splendid array of chicken breeds–the beautiful colors, the crazy assortment of combs, the mohawks, the feathery hats, ones with five toes, ones that laid green eggs, ones with feathers on their feet–I knew I had to get myself some of that backyard eye candy.

One week after we brought the girls home, the Disgruntled Farmhand’s chick mysteriously died. I freaked and began a fast and furious Internet search of all things chicken disease related. There are a lot of messed up chicken illnesses out there, but only a small number of common ones. Since the chicks came from an overcrowded environment, I deduced that it was most likely coccidia, a parasite that normally lives in a bird’s intestinal tract, but since some is discharged in droppings, it can overpopulate to fatal levels in young chicks due to a chicken’s propensity to peck anywhere, even in a pile of their own poop. I treated the other two birds with Cordid, a medication labeled for cattle, but appropriate for poultry as well, and set off to buy four more hens from the same breeder, thinking my problem was solved. This is where everything went wrong, very, very, wrong.

The gruesome details of the story are laid out in past posts on my blog. They chronicle a sad summer in which I attempted to masquerade as veterinarian (owning urban livestock requires this as most city vets are not trained to treat poultry), nurse, cure, and somehow salvage the rest of the flock, only to be met with disappointment at every turn. By mid-fall, I had lost my sixth bird, my beautiful Dutch Brabanter, who had the sweetest disposition as well as one badass mohawk. Not one of our chicks made it to egg laying age, which occurs at approximately 20 weeks.

I was down to one wayfaring hen and as any farmer will tell you, chickens are not solitary creatures. A bird needs her flock. Our goats, Lucy and Ethel, were doing their best to stand in stead for poultry, but couldn’t quite cut the mustard as they have a tendency to frighten birds with their rambunctious play. The mystery of the deaths demanded solving in order to get us out of this pickle, a dilemma that had me teetering between two equally unattractive choices: 1. Cull the last bird, Sweet Pea, who was certainly a carrier of whatever was wiping out the flock. (This was, of course, out of the question since this hen is her name incarnate) or 2. Purchase more chickens and risk more carnage. No way. No how. We were up to our eyeballs in death…and we were running out of burial sites.

Fortunately, we had a third option. California’s Animal Health and Food Safety Laboratory will perform a necropsy on a chicken, free of charge, for anyone who has a flock of less than 500. So we Fed Exed the last corpse (yes, you read that correctly) to U.C. Davis and received our results in about a week. (You also read that right; at least one bureaucracy in the state of California runs an efficient ship. Will wonders never cease?). The Brabanter died of Marek’s, a common and especially deadly disease in unvaccinated birds. Though the breeder we purchased the chickens from claimed that her birds were all vaccinated for Marek’s, I knew this was impossible given the rate of deaths in our flock.

In a strange, ironic way, this was actually good news. Though our remaining chicken would be a carrier of Marek’s, we could repopulate our flock as long as we purchased vaccinated birds. I found a young farmer selling a smaller variety of heritage breeds, interesting nonetheless, who assured me that she only sold vaccinated birds at her business, Split Rail Farms. Sometimes dreams must be quelled by good old common sense. My obsession to own fancy feather capped birds was tempered by an even greater desire to possess a chicken that would actually lay an egg before I threw in the towel on the whole project.

However, I didn’t choose function to the complete obsolescence of form. We ended up with an Ameracauna, a breed known for their green eggs, but ours lays peach colored ones, a Cuckoo Maran and Welsummer, both layers of chocolate brown eggs though our Cuckoo lays speckled, and a Silver Laced Wyandotte who has a gorgeous fluff of black and white feathers that, indeed, do resemble rows of lace.

Though we purchased the birds at point of lay, we didn’t see an egg for almost seven weeks. I should have expected as much given that the days were growing shorter, slowing down their maturation. Chickens are also known to lay fewer eggs in the winter. Somewhere in between Winter Solstice and Christmas, the eggs began to trickle in. Now we get three to five a day. The yard is boisterous with the happy clucks and chirps of ladies laying.

We are grateful that the fruits of our labor are finally paying off. No more standing in front of the egg display at the grocery store, trying to determine how humanely the animals were treated; were they truly free range, force molted, de-beaked, or worse, raised in tiny cages never allowed to even once touch one of those skinny, long-nailed, witchy toes to the ground? We know our chickens are roaming freely about our little pasture, mowing the weeds and fertilizing the soil. After enduring such a heart wrenching struggle, the paramount gift we receive is summed up by my six year old daughter’s exclamation this morning after I whipped her up a bright orange scrambled egg, chocked full of Omega-3 goodness, “Mom, we have the best chickens in the world. They lay us eggs.” Indeed.

Editor’s note: Heidi will speak about her chickens and more tomorrow night at the Kitchen Table Talks on urban homesteading, which is SOLD OUT!