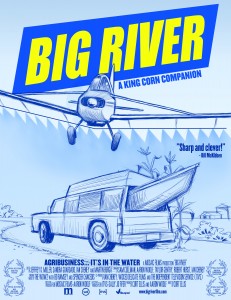 What happens in Iowa doesn’t stay in Iowa. This is the lesson illuminated in Curt Ellis and Ian Cheney’s latest film, Big River, a companion to their successful film King Corn (made with director Aaron Wolff). In King Corn, Ellis and Cheney grew an acre of corn and followed it to the plate by way of the processing that brings us most of our packaged food and the confined animal feeding operations (CAFOs) that bring us 99% of our meat. This time around, they follow the top soil, fertilizer runoff, and pesticide residues from the acre they planted into the local water system and further to the Gulf of Mexico’s dead zone.

Big River begins during the floods that overtook Iowa in 2007, which lead Ellis and Cheney to ponder the ecological consequences of the farming methods they used on their acre of corn. To discover just how modern farming affects the local community and beyond, they hop into a canoe and move down river to visit the largest nitrate-removal facility in the world — a necessary technology used to clean Iowan’s drinking water; a fertilizer factory, which replaces the land’s natural fertility with a process that uses natural gas to extract nitrogen from the air (the result is nitrates that bind with water and are easily pulled downstream); and  the fisheries of Louisiana, where a 300-mile long dead zone filled with those nitrates is fueling an algae bloom that is killing the fish.

Perhaps the worst legacy of our modern farming system, though, has remained on the farm. The land Ellis and Cheney grew their corn on in Iowa is owned by Chuck and LeVon Pyatt, conventional farmers who have been using pesticides and artificial fertilizers for many years. While they were filming, LeVon succumbed to non-Hodgkin’s Lymphoma, a disease tied to pesticide exposure that is all too prevalent in this part of the country. It seems that the system that pushes us to try and grow as much corn as possible no matter the costs might just have human lives on its hands, as the incidences of non-Hodgkin’s Lymphoma has more than doubled since the 1970s.

Check out the trailer for Big River:

The film is going to be traveling the country this year, where it will be screened at theaters, universities and homes near you. And if its not showing near you, you can go to the website and sign up to host a screening for your community of both King Corn and Big River.

But wait! There is more you can do to promote change in a system that is bad for the environment, the economy and our health: Big River‘s creators urge you to write Secretary of Agriculture, Tom Vilsack, and tell him that Green Payments make a better alternative than subsidies for the next Farm Bill; encourage him to prohibit the use of Environmental Quality Incentives Program (EQIP) funds for Confined Animal Feeding Operations (CAFOs); ask him to think about the next generation of family farmers, and help them get access to land, training, and federal dollars that support sustainable agriculture; and nudge him to help farm families test their wells for contaminants, as too many rural residents are exposed to chemical residues. It wouldn’t hurt either if he watched Big River, or hosted a screening at the USDA. The more information, the better the opportunity for improving the quality of life for hardworking, rural Americans.