Fear of Not Flying | Civil Eats

Fear of Not Flying 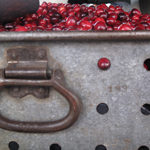 Growing up in the era of George Reeves (aka Superman) I confess that my secret fantasy was to fly. For years, I would dream about lifting off and soaring up into the sky. It was so real and logical – of course one day I would find a way. Back to that later.

A grueling year approaches the finish line. There’s one more weekend to go. The party’s are pretty much over. Our President has demonstrated that compromise is a survival tactic we can believe in.

Standard expectations were lowered; budgets reforecasted and adjusted again and again. Staff trimmed, perks deleted and just to make things really interesting, competition became fierce. Victories and defeats so closely mingled it is at times hard to know which is which.

Let’s call out the good – new accounts, new ideas, good stuff at the farm and inspiring teamwork. Yet there has been little elation at the approach of the annual finish line. Tired bodies, anxious for holiday escape and restoration, will trudge into the office and kitchen for a few more days. I too, have been tired, something I would never in a million years have ever admitted before. After having been soundly rebuked by the economy and the evaporation of corporate business, we are all gun shy. I have not seen cautious optimism, only guarded pessimism when talking about 2010.

At a holiday party we hosted last week, in the Great Performances kitchen for our neighbors in the Hudson Square Connection, the conversation between business owners and executives echoed similar themes – “A tough year”, “We made it”, “Who knows what new year will bring.”

Get the picture – a little hard to feel that natural optimism.
Back to flying.

Midnight last Thursday found Sam and me at the first screening of Avatar. I was hooked. It transported me to a world of incredible beauty, the fight between good and evil, the power of an individual to change the world…and the dream of flying. Manohla Dargis in The New York Times review captured the feeling the movie evoked so succinctly: “Few films return us to the lost world of our first cinematic experiences, to that magical moment when movies really were bigger than life…if only because we were children.”

I sailed home and into the weekend with the magic of Avatar in my head. Somehow, I had been jolted out of the realm of anxiety and pessimism – hallelujah! Suddenly, the glass was once again, half full and my own worse fears receded. Almost instantly, I saw things differently – we have some great things planned for 2010 and our company though battered, is still unbowed. We will struggle to discover where the corporate clients are hiding, but we will find them. We will work smarter, and yes, harder, but with renewed purpose and belief in each other and the projects we are committed to. We will continue to try to make a difference in the food world for everyone who wants to eat.

A happy ending: Sunday was the final New Amsterdam Market of the year. In spite of a few snowdrifts, a lot of slush and blustery winds, the stalls were filled with purveyors and buyers. We featured our Katchkie Farm products along with some amazing mulled apple cider, butternut squash soup and crispy Latkes (served with Tomato Jam). It was a beautiful day – there was old-fashioned magic in the air – that was reminiscent of markets that must have stood were we were today. The fishmongers bulged under their layers of clothing, shucking oysters and wrapping smoked fish. There were spinners with wares of soft wool and vibrant patterns. Bakers displayed sweets one only dreams about and bread makers with loaves so unusual, within hours they were sold out.

There was craftsmanship and a celebration of the season. It was the old world way of respecting ingredients by carefully and slowly making something special.

Sometime it is better to look at the world with innocence and optimism and believe that the impossible is possible. That we can solve some of the overwhelming problems we are facing be it climate change, feeding the hungry, or simply growing our businesses and achieving our own personal goals.

Who knows, it might even be possible to fly.

Liz Neumark conceived of Great Performances as a waitress service for women in the arts. Her company has become the largest off-premises catering company in the city, whose exclusive contracts include Jazz at Lincoln Center, Brooklyn Academy of Music, Apollo Theater, Sotheby's and El Museo del Barrio as well as a joint venture at the Plaza Hotel. In 2006, Liz purchased 60 acres of never before farmed land to create Katchkie Farm, which provides produce to special events, farmers’ markets and cafes around New York City. Read more >