Getting at the Roots of Climate Change: Food | Civil Eats

Getting at the Roots of Climate Change: Food 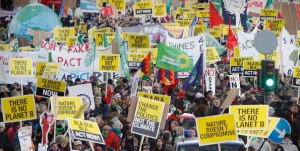 Around one third of global greenhouse gas emissions come from the way we produce, process, distribute and consume the food we eat according to the Intergovernmental Panel on Climate Change (IPCC). Meanwhile, farmers the world over will be the most affected by climate change, as higher carbon in the atmosphere and higher temperatures increase erratic weather patterns, pests, and disease occurrence, while decreasing water availability, disrupting relationships with pollinators and lowering yield and the efficacy of herbicides like glyphosate (aka Roundup) — all detailed in a revealing new report from the USDA called The Effects of Climate Change on U.S. Ecosystems [pdf].

We should all give the USDA credit for keeping the ties between agriculture, food and climate change at the forefront of the discussion. Even in Copenhagen, where agriculture is getting less attention than it arguably should be considering its impact and potential for mitigating climate change, U.S. Secretary of Agriculture Tom Vilsack spoke about the need for research, and seeing agriculture as an opportunity for climate change mitigation. He even said to the delegates in Copenhagen, “We need to develop cropping and livestock systems that are resilient to climate change.” While I agree on the surface with these statements, taking a deeper look reveals potentially problematic ideas for just how to do this.

Outlined in Vilsack’s prepared remarks are a few clues for how the U.S. is looking at adapting agriculture in the face of climate change. I find it valuable to do a little point-by-point debunking here, so we can look at the facts again, laid out so clearly in the USDA report above, and come up with real solutions. And since the U.S. is responsible for the most greenhouse gases, and we were the first to adopt intensive agriculture practices, we have an opportunity to lead the world to a more sustainable future.

No-Till. Here is a classic case of agribusiness co-opting a perfectly good solution and making it bad (and then whispering it into the USDA’s ear). Sustainable no-till practices involve building soil fertility with cover crops, which sequester carbon, and then turning them into a healthy mulch. No chemicals are used, and soil fertility increases. This practice is being studied at places like the Rodale Institute. The co-opted version, on the other hand, which i’ll refer to as chemical no-till, is the one touted by Monsanto with it’s Roundup Ready seeds, which can be planted and doused with glyphosate — killing the weeds and not the soybeans. Aside from the fact that superweeds are more and more common as pesticides increase in use, the life in the soil is also being killed by these chemicals. What this means is that the earthworms, protozoa, ants and other decomposers that are actively ’tilling’ the soil are not there to do so. Furthermore, bacteria in the soil, like rhizobia, actively fix nitrogen. Without nitrogen-fixing soil life to intervene, a putrefaction process called denitrification results in lost soil fertility, as nitrogen is released as nitrous oxide into the atmosphere. What is totally not funny about nitrous oxide is the fact that it is 298 times more potent than carbon dioxide. Do you get where I’m going with this? Nitrous oxide may only represent 7.9% of our greenhouse gas emissions in total, but it is one powerful source, coming directly from synthetic agriculture fields.

Carbon Markets. Sure it sounds good to offer cash benefits to farmers who use more sustainable farming practices. But what would this look like? Would it encourage farmers to utilize fewer fossil fuels, or to transition to organic farming? A lot of Big Ag players would kick up dust if that were the case, even though these are truly the ways to draw down our agricultural footprint. Unfortunately there are some ugly manipulations of carbon markets to watch out for. And according to a report by Helena Paul et al and prepared for the Bonn Climate talks last June called Agriculture and Climate Change: Real Problems, False Solutions [pdf], getting this wrong could mean exacerbating global warming instead of preventing it. Paul told the Ecologist about a few worries: First, that chemical no-till might be one of the so-called “sustainable” practices that qualify. Second, that stipulating the use of biochar, or charcoal, as a soil remediation technique, could result in plantations as sources for the biomass, adding incentive to cut down forests. Thirdly, she mentions that some Big Ag players argue for further intensification of livestock operations, making the case for using manure to make biogas. We can’t afford such paltry solutions.

Genetically Modified Organisms (GMOs). If Monsanto had its way, our government would be paying farmers to grow GMOs. However, GMO manufacturers have been promising ‘sustainable’ drought tolerant and higher yielding crops for decades now with no results. All these companies have figured out how to do in the short-term is to create herbicide resistant plants and plants that make pesticides. Meanwhile, these technologies have brought with them a whole host of new problems for the environment: genetic contamination; the addition of 318 million pounds of chemicals into our soils, water and air; and a significant loss of biodiversity. There are agro-ecological solutions that could be employed now to build our soils and sequester carbon — because this is a new technology that hasn’t been tested in the long term, and we need solutions now, it is worth rethinking the billions spent on GMOs for twenty years from now.

Ethanol. Vilsack and President Obama talk about ethanol as if it had the potential to quench our thirst for oil. What you need to know is this: ethanol takes more energy to make than it produces. However, a cottage industry has emerged to get politicians to support ethanol — the growth in use of which helped fan the flames of last year’s food crisis. Unfortunately ethanol offers a talking point, and fulfills our desire to give a quick, silver bullet solution to a difficult problem: how to maintain our standard of living in the coming resource-starved era.

The UN Food and Agriculture Organization (FAO) has said that we will need to double world food production by 2030 in order to feed 9 billion people. I often see this statistic: 14% of greenhouse gas emissions come from agriculture, while 17% come from deforestation, used by agribusiness to justify industrial farming as saving rain forests. In fact, it is the commodity market that encourages deforestation through increasing the size of farms and through over-production. Most of what is produced in this way is wasted or fed to factory-farmed animals. Since smaller, diverse and well-managed fields are more productive, we do not need to cut down the forest in order to feed a growing population sustainable food. Indeed, there will have to be more farmers willing to do the work, eaters willing to eat less meat, and better policies that support farmers before agribusiness. And I agree with Vilsack, we need more research. We also need to nurture soil life, as that is where the real heavy lifting is happening in agriculture.

Here in New York City, we are hopeful that we can change the climate impact food has in our city. But without federal, agricultural solutions to these problems, we will all continue dog-paddling through the flotsam and jetsam of unhealthy, resource-intensive, climate damaging food-like substances.