An Interview with Economist Michael Shuman 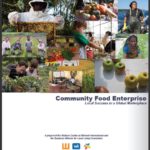 “Community food enterprise” is the term Michael Shuman, author and Director of Research and Economic Development at BALLE (Business Alliance for Local Living Economies), has coined to describe locally owned food businesses, which he argues are emerging as vital economic stimulators worldwide. His new report, Community Food Enterprise: Local Success in A Global Marketplace, illustrates how these businesses are becoming more competitive, scalable, and critical to global economic-development strategies. The work is the result of a multi-year partnership with a half-dozen analysts at the Business Alliance for Local Living Economies and the Wallace Center at Winrock International.

Recently, I talked to Michael about what why community food enterprises (CFEs) are so important, and why local food advocates should pay attention.

WW: Why does local ownership of food business matter? What’s wrong with a world where Walmarts just source locally?

MS: One of the prevailing misunderstandings around local food is that it is just about proximity — where food is grown and processed in relation to the location of the consumer. Our CFE study suggests that an equally important part of local food systems is the ownership of the businesses. There is a growing body of evidence that locally owned food businesses generate substantially more income, wealth, jobs, taxes, and charitable contributions for their communities and for the marketplace than do non locally owned players like Walmart, even if those big companies are sourcing locally.

WW: Why is this the case?

MS: The basic reason is that local businesses spend more of their money locally and therefore pump up the local economic multiplier, which is the cornerstone of economic development.

WW: Why use food as a way to talk about the importance of local ownership ?

MS: Food turns out to be an important entry in consumers’ consciousness about the benefits of buying local. We understand the virtues of local food viscerally, emotionally and literally. We can taste the quality, meet the producer and visit the farm and indeed interact personally with every aspect of a local food supply chain, should we choose to do so. That is not necessarily true of local energy, local finance or local manufacturing. Plus, because food businesses dominate much of landscape of both rural America as well as most developing countries, the food sector serves as the critical foundation for rethinking economic development.

MS: A community food enterprise (CFE) is a locally owned food based business. It could be a producer, processor, retailer, restaurant or even a food-training program. We’ve used the term “enterprise” to refer to a broad range of business models, including sole proprietorships, partnerships, corporations, nonprofits, cooperatives and public-private partnerships. By “locally owned,” we mean that at least 51% or more is owned by people residing in the region where business is based.

WW: Give me some more examples.

MS: In the United States, we looked at businesses like White Dog Café in Philadelphia, the Oklahoma Food Cooperative in Oklahoma City, Weaver Street Market in North Carolina, the Intervale in Vermont, and Swanton Berry Farms in California. Internationally, we looked at a bunch of producer cooperatives, including ones for onion farmers in the Philippines, for cocoa growers in Ghana, and for organic vegetables in Nepal. We also looked at really unusual businesses like Cabbages and Condoms, which are a dozen restaurants and resorts in Thailand that generate $2 million to support AIDS education and reproductive rights of women. Each of these qualified as a CFE because they were owned by the farmers, producers, or proprietors themselves, or by nearby investors.

WW: What were the most important findings of your report?

MS: Five points stand out for us. One is the point above that ownership matters as much as proximity. Second, CFEs exist in developed as well as developing countries and engage people at all income levels. Third, CFEs defy our common assumptions: they are often quite sophisticated about business; they often reach into global markets; they take on myriad business frameworks; and they are not necessarily small. Several of our case studies, like Organic Valley, a producer cooperative based in Wisconsin, have annual sales in the hundreds of millions of dollars. Fourth, CFEs are deploying more than a dozen interesting strategies that were once perceived as liabilities, and transform them into assets to compete effectively against multinational behemoths. Some examples are small markets, limited capital and high social standards. Finally — and perhaps most importantly — economic development efforts, both domestically and internationally (such as those led by the World Bank and the United Nations Development Program), could find great success by incorporating CFEs into their programs.

WW: Why did your sponsors, the WK Kellogg and The Bill & Melinda Gates Foundations, invest in this project?

MS: Both foundations are very intrigued by the opportunities presented by understanding the relationship between local foods and local economies. The project originated when the program officers at the two foundations met three years ago. Kellogg was increasingly appreciating the value of studying local food systems in the US. The Gates Foundation, which is primarily focused on international development, said, “This is interesting, but we really don’t understand what local food means”. Out of that discussion emerged a commitment to define CFEs and tease out the opportunities for economic development both in the U.S. and abroad.

WW: How did you pick the case studies?

MS: We were looking for exemplary local food businesses that would give readers a sense of huge variation in size, business model, ownership and philosophy. We sent an invitation for great case studies to an email list of 20,000 individuals. Many people treated it as a nomination for an award, and we got hundreds and hundreds of suggested local food businesses. The real challenge was sorting through all those suggestions and figuring out the most representative sampling. We ended up selecting 24 businesses — equally divided between U.S. and international examples. Each enterprise allowed us to look at their books and conduct a thorough structural and financial analysis. We also required each CFE to take a survey designed by B-Lab to rate its social performance.

WW: What would you like people to do with the report and with the CFE concept?

MS: The bottom line is simple. Readers should use these findings to press their municipal economic development departments to focus on local food. Find those great CFEs already operating in your community and expand them. Where you are importing outside food, read our report for great examples of the kinds of CFE you could create to become more self-reliant. Sooner or later, the Obama Administration and others will hopefully realize that this is the only kind of economic stimulus worthy of the name.

Michael Shuman is the author of seven books, including Going Local: Creating Self Reliant Communities in a Global Age and The Small Mart Revolution. He is also the Director of Research and Economic Development BALLE (Business Alliance for Local Living Economies). He lives in the Washington, DC area, but is often on the road talking about what local food has to do with why local economies matter.

Wendy Wasserman is a public policy and communications consultant focusing on local food systems. She has been tracking, and occasionally working on, the CFE project for the past year. She also lives in Washington, DC. Read more >