Shifting Paradigms at the Young Farmers Conference in New York 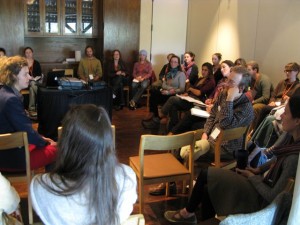 Last week, 200 young farmers gathered at the Stone Barns Center for Food and Agriculture in Tarrytown, NY for a conference with the aim to provide education and support to sprouting farmers. This was the second year of the Young Farmers Conference, filled to capacity and begging the question, will the conference go national next year, or stay local?

The feeling in the air was one of excitement; despite the obstacles, these twenty- and thirty-somethings were eager to better their skills and be a part of the revolution in how we feed ourselves. Workshops included those on composting, poultry processing, creative ideas for accessing land, navigating Farm Bill programs for beginners, soil nutrition, agroforestry and tree crops, farming through the winter, permaculture, bringing meat to market, and more.

As a wannabe farmer-gardener myself, I also learned a lot. Like, for example, that the USDA defines a beginning farmer as someone who has been farming for less than ten years, but who has three years of farm management experience under their belt. Traci Bruckner from the Center for Rural Affairs and Aimee Witteman from the National Sustainable Agriculture Coalition walked us through a number of programs that beginners are encouraged to apply for, like the Value-Added Producer Grants and Community Food Project Grants.

In another session, Severine von Tscharner Fleming, the leader of the Greenhorns —  an organization that puts on events and provides tools to young farmers — led a talk on seeds. Tom Stearns from High Mowing Seeds, Pete Johnson from Pete’s Greens, and Ken Greene from the Hudson Valley Seed Library discussed the difficulties around starting a seed-based business: the trial testing, erratic income, the need for marketing. All seemed happy, however, to be a part of the movement to reclaim seeds from agribusiness. (This is the best time of year to help these farmers out by buying seeds early, by the way, as they’ve put up capital to produce their catalog and package the product. Seeds make great holiday gifts!)

Rounding out the first day, Wes Jackson gave a talk to the group, whom he referred to as the “refugia,” saying “we need your help!” He spoke about the work he is doing to perennialize wheat and other grain crops at the Land Institute, and added that “human cleverness should be subordinate to nature’s knowledge.” He also spoke about the visit he made with Wendell Berry and Fred Kirschenmann (who also spoke) to Washington, D.C., saying that Secretary of Agriculture Tom Vilsack and Deputy Secretary Kathleen Merrigan still haven’t responded to their calls for a 50-year Farm Bill. (The gist of which can be read in their scary op-ed from the New York Times earlier this year).

In another session I attended, the focus was on the ins and outs of land leasing, and yet another featured two farmers, Benjamin Shute and Hector Tejada, discussing the things they’ve learned as farmers with a few years under their belt. There were many sessions I wish I could have taken part but missed… well, there is always next year.

Kirschenmann, President of the board at Stone Barns, focused his talk at the end of the conference on building a “knowledge-intensive agriculture,” and being hopeful. He gave a few pieces of advice: 1. Challenges are always opportunities. 2. There will be plenty of space in the new system for all young farmers who want to farm, no matter how difficult the obstacles seem now, because resource availability will require it. 3. The economy of community will be important moving forward. He said we must work on reducing transaction costs where ever possible, through the spirit of cooperation. He also suggested a book called the Real Wealth of Nations, by Riane Eisler. 4. Civics matter; demand policy changes. 5. And pay attention to the models emerging. Small systems can be very productive, he said, giving the example of Will Allen’s Growing Power, where 10,000 people are fed from 3 acres. (Kirschenmann was also on the Leonard Lopate show last week with two young farmers. You can listen here.)

Surprisingly, there were farmers from much further out than the northeast; I met a young woman who’d been farming in rural Wisconsin, and there were two people who’d come together from a Michigan agriculture school, among others. (I also noticed the crowd was not very diverse, made up of mostly college-educated and white farmers.) This prompted me to ask Nena Johnson, Public Programs Director at Stone Barns, whether or not there were plans in the works for an outreach strategy, to make the Young Farmers Conference a national event. Instead, she told me, the intention was to create a training program so that similar conferences can be held all across the nation using locally based knowledge. One big success according to Johnson: calling on young farmers to design the programming.

The final session I attended, Building the Young Farmers Movement (pictured above), was led by Shute and Fleming. On a sheet of paper, Fleming wrote out all of the problems facing young farmers as we called them out: infrastructure and community building, land access, getting the training you need, building political will, access to healthcare, sustainable finances, and isolation, to name a few. But quickly the page was turned and begun anew: in a full room in the back of Blue Hill restaurant, young farmers began to hatch a plan for staying connected, and discussed coalition building to push for a sustainable farming agenda.