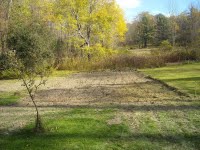 Step out of the realm of thought, get on your hands and knees and start building. Set poetry in motion. You can start your first draft and I promise the poem will grow increasingly interesting.

My poem is about a tiny farm I’m starting for a couple of farm smitten NYC non-farmers who own a restaurant, cafe and grocery store in Brooklyn, and who want to grow some of their own produce. My goal is to set in motion year-round, efficient, ecologically sound and manageable growing systems to help them reach their goal of farm to table. Oh, and to keep the seedlings alive. Without the challenge of turning a profit this first year, and with support for low-budget experiments, I’ve landed in a great place to learn and grow alongside my adventurous employers. 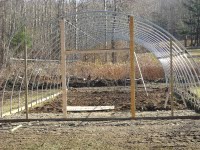 The following is an email excerpt to some farmers north of here, who are seasoned winter growers and supportive of this project. I wouldn’t blame anyone for skipping over it. Until recently my eyes glazed at the mere mention of greenhouse details and planting specifications, though in theory I was interested. Perhaps because starting ‘my own farm’ was an imaginary leap into a pit of venomous snakes. Despite the terrors inherent in committing to farming, now that I have my own project, I find the details riveting. You might too, if you are on the verge of growing food for people.

…the greenhouse has transformed since I emailed you. A proper swale has finally been dug and I don’t expect more flooding. I put aluminum flashing along the sides to deter voles, mounded earth against it for insulation, and left extra frame plastic hanging over for drainage. I’ve decided we should not invest in a heater, fan or shutters. I’ll do what I can to avoid reliance on unsustainable energy sources and expensive technology. I may look into affordable solar alternatives and grant availability for our minimal energy needs. For heating we have a double layer of greenhouse plastic and double row cover over the beds, which will not be raised. For air ciruclation we have doors and vents so large that opening them is essentially like removing the end walls. Considering our dimensions (26x12x60), later in the spring I think we’ll need more ventilation. I hope we can build at least one 4×4 vent into the ceiling, with an automatic, thermostatically controlled arm. I’ve amended the greenhouse soil with lime, composted horse manure and bloodmeal, although I’m still concerned about low phosphorus. This winter I’ll be growing in four 4’x50′ beds with 2′ pathways (covered with cardboard and straw). It’s hard to believe that just a few weeks ago this patch of earth was complete sod. Equally as hard to believe is that next week thousands of spinach and mizuna seedlings will be getting established here. The greenhouse will double as a nursery, but not until May, since the field won’t be ready for planting until June. I had wanted to plant a cover crop in the greenhouse during the summer, but some farmers do not think this is a good or profitable idea. I haven’t decided how flexible this greenhouse will be in the summer. I don’t want to overextend the soil OR myself… 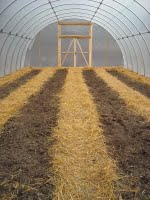 If a new farmer gets to the point where an apprenticeship is too basic, and wants to take their vocation to the next level without tying the knot, in addition to farm management, I recommend looking into funded pilot projects, and going so far as to advertise for them. Starting a farm for someone can be very rewarding. With an understanding of your basic needs – such as your bottom line needs, what you seek to learn, what you have to offer, needed materials and support, etc., you can draw up a rough employment contract.  When you find what seems like a good match, you’ll be prepared to negotiate an arrangement.

And yes, young, anonymous farmer, when you find yourself standing in the middle of a new field, you will be able to set the farm wheel turning with the same, mighty force that moved the pen of the poet, songwriter or artist who inspires you.

Rebekah Rushford is a new farmer who is starting a small vegetable farm (with chickens!) in Canaan, New York. She welcomes other new farmers to email her (rebekah.lee.rushford@gmail.com) with questions, and she is happy to share stories of how her yet-to-be named garden grows. Read more >