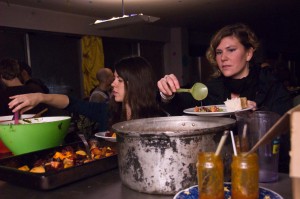 Last weekend over 1500 people gathered at the former office block Hamilton House in Bristol (UK) for a feast like no other. None of the kitchen staff were being paid, all the food supplied was foraged, donated or liberated from bins and there was even free beer and hard cider made from foraged ingredients. So why did so many people offer to help and why did such an extraordinary event take place?

It was mostly down to economist and former business man Mark Boyle (I say mostly as the event was the idea of myself and good friend Francene). Mark Boyle has been living without spending any money over the last year that year ended on 28th November. The feast was in order to celebrate his admirable achievement.

Over the past year Mark has foraged and traded his time for food, cycled everywhere on his bike fitted with puncture proof tyres, washed all of his clothes by hand with home made soap and brushed his teeth with cuttlefish bones. His home has been a caravan parked in a farmers field where he gives some of his time in return for his “rent”.

Marks reasons for giving up money are simple, he believes that money has become a tool that disconnects us from each other. He always uses the example of a table to explain this, if we know the person who hand crafted a table and even the tree that the wood came from then we will take better care of it and appreciate it more. If this table comes flat packed then we have no emotional attachment to it and its journey to landfill will be swift.

Not content with just giving up money himself Mark has set up the “freeconomy” a website set up so that anyone in the world can share tools and organize free events. It is a lot like freecycle only with a people’s time, expertise and garden forks.  The freeconomy is huge and boasts thousands of members all across the world. The freeconomy is arguably the most successful here in Bristol (UK) where it was founded.  This can be easily demonstrated when I search for freeconomy members within just 5 miles of where I live I can find almost 1000 people.  These sorts of numbers are enough to really make things happen and this year on international buy nothing day (28th November) something amazing really did happen.

Dubbed as the Free feast(ival) it was not just food on offer and festival goes could enjoy films, a series of innovative talks, a free shop was set up and a clothes swap. As no one was even accepting any donations it is difficult to describe the atmosphere without sounding like a hippy, but the energy was amazing. I guess as food really does unite people and I think in someway by having such a feast we were reconnecting with a practice that links us firmly to the behavior and practices of our ancestors.

So a feast with free food must have been pretty ropey right? Well surprisingly not actually, wild leaf soup was on offer made with charlock (a fiery wild cabbage that grows as a weed) and stinging nettle or if that did not tickle your fancy, rosehip and beetroot soup was also on offer. The next course was curry and salad and finally a choice of deserts apple crumble, bread and banana pudding and sea buckthorn sorbet. The Sea buckthorn sorbet had to be one of my highlights as I when I am not writing I work as a professional forager, and living away from the coast, sea buckthorn is not a plant I have regular contact with. I have to say that it has a taste like nothing else you will have tasted before. At first the coldness of the sorbet hits you and then as this dissolves a rich fruity flavor hits your taste buds followed by a pleasant earthy aftertaste. I was very impressed.

When it came to making the beer, I was in two minds about training people up to brew it as beer can really change the atmosphere of a party. I need not have worried as it seemed to just add to the festival atmosphere. Although, people found it hard to understand that there was free beer at first, I think more so than the food. In fact there were a few people who just did not understand the concept of everything being “free” and kept trying to offer to pay for things. But money was not welcome at this feast as one woman found out the hard way when she rather foolishly tried to sell her homemade flapjacks. The crowd turned on her with taunts of , “This is a Freeconomy not a meconomy” and rather simply “ oi, flap jack”. She soon got the message and put them away looking slightly sheepish.

Perhaps the most shocking part of the feast was not that we fed 1500 people with food that would have otherwise gone to waste. It was that we could have fed more people and that we could keep on feeding the same amount of people every weekend for ever more.

Andy Hamilton is a UK based writer, professional forager, gardener and keen home brewer. He is passionate about food and has a very practical approach to keeping his eating local as he grows, forages and brews as much of his food and drink as space and time will allow. You can read more in his book, The Self-Sufficientish Bible. Read more >