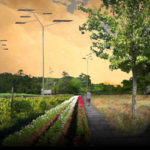 An open challenge to rethink suburbia put forth by Dwell and inhabitat.com a few months ago got me thinking about the possibilities of suburban farming. Urban farming helped renew the inner city. Suburban farming can revise sprawl.

I came to this conclusion after driving around the Birmingham, Alabama suburbs. I live and practice architecture in the city. It is a typical American industrial city with vast suburbs and a sparsely populated downtown. An urban renewal effort underway here for years propelled by a number of private initiatives, most notably a successful urban farm, has begun to make noticeable differences in downtown.

As I was driving through some of the older suburbs developed after the 1960’s, I noticed the same kind of sparseness and abandonment that has plagued Birmingham’s downtown. Out-of-favor, abandoned shopping malls and big box retail developments have reached a critical mass and have become noticeable. As I drove further outside into the periphery, fresh developments full of trendier brand name retail establishments had just been built.

What really got my attention were the many empty grocery stores. Three regional grocery chains had been forced to close their doors. Families were still living in the neighborhood. But, their grocery store, their market, a traditional center of community, was empty.

The hollowing out of older suburbs and the growing suburban periphery continues in most cities. These growing areas of vacancy between the newer, trendier suburbs and urban areas offer opportunities to mend cities. I believe suburban farming, like urban farming before it, can begin to bring back a more civic, sustainable economy. After urban renewal we need a suburban revision, where responsible production of food and energy moderates the consumptive nature of suburbia.

It seems to me that suburban farming can be implemented on a much larger scale than urban farming. Abandoned retail’s huge expanses of parking lots, large big box spaces, and lower real estate prices point to an opportunity to reclaim the productive pastoral atmosphere of the land before sprawl. The original promise of suburbia, refuge from the industrial city in the productive countryside, is still achievable.

My proposal, which you can see partially from the suburban farm image here, reverses the function of a big box grocery store, from retailer of food – food detached from processes from which it came to be – to producer and preparer of food. The parking lot becomes a park-farm. The inside of the big box becomes a greenhouse and restaurant. Asphalt farming techniques allow for layering of soil and compost in containers on top of asphalt. The big box store’s roof is partially replaced with a greenhouse roof. Other details, such as the reversal of parking lot light poles into solar trees that hold photovoltaics can be implemented.

One can imagine pushing a shopping cart through this suburban farm and picking your produce right from the vine, with the option to bring your harvest to the restaurant chef for preparation. While waiting for your dinner you look out over the farm with a holistic understanding. Food cultivation, processing, preparation, and consumption integrate into a local, transparent process.

A certain type of economy has defined the suburban landscape as we know it now. The typical models of retail and housing have proven themselves to be unsustainable. Other economic or business models can have an opposite effect. I see suburban farming as a potential sustainable business model, where a premium might be paid for the most intimate, organic food experience. For me, a sustainable economy starts with innovative business models that challenge the typical production, distribution, and retail practices.

You can see full coverage of this entry and other winning entries of the Reburbia competition in the upcoming December/Janurary edition of Dwell.

Forrest Fulton is founder and principal of Forrest Fulton Architecture in Birmingham, AL. His work focuses on relationship of place, culture, technology, and sustainability to solve civic problems. He has taught architecture at Auburn University and practiced with a number of internationally renowned architecture offices. Read more >