From a Forager’s Memoirs: Hachiya Persimmons 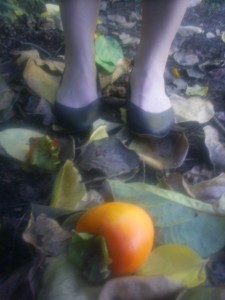 Each year, between November and February, slowly and intently, hachiya persimmon altars begin to take root in my North Oakland apartment. They form on my kitchen window sill; on my bedroom dresser; on my dining room table; on my office desk. I fall into the familiar habit of always having one or two persimmons in my bag in case, in the course of the day’s travels, I meet a neighbor to whom I’d like to bestow a persimmon.

The first time I saw a persimmon was in my North Oakland neighborhood in California. The exact moment is now foggy in my memory, but the sensation remains clear, that quickening of the heart, that sudden unbelievable joy at such an unexpected fruit in the dead of winter. Now, four years later, I am on a train that has just departed the station in Bra, Italy, and I am heading towards Carmagnola. On the train ride, I’ve passed the most haphazard (insofar as their use of all possible available space) and well-tended orchards that nearly abut the train. And just a moment ago, the train crept along as Italian trains can, and in plain sight, we passed an orchard of hachiya persimmons. A few of the fruits were ripening, but by and large, the tree bore matte lime green fruit, with a few glossy orange globes towards the top. Each time I unexpectedly find myself in sight of a persimmon tree, the same heart-quickening sensation returns, the feeling as lucid as the first time I saw the fruit in Oakland.

What I remember most about that first time are the contrasts; the tree, heavy with fruit, so weighty, and still so unassuming in the dusk’s haze, glowing sweetly. And by this point, by the time the fruit is ripening, almost all the leaves have fallen, leaving absolutely no shield for the radiant orange fruit. They glow, almost unnaturally. I was riding my bicycle and paused in front of the tree, so struck by it. I think years from now, long after I’ve moved on from the Bay Area, the memory of winter persimmons will remain luminescent and magnificent, probably as clear as the day I first spotted the tree.

Persimmons may also hold a special place in my heart because I associate them with generosity. Inevitably when I meet someone who has a persimmon tree and I ask if I am able to harvest some of the fruit, they show an uncommon generosity with the fruit. This generosity does not stem from the desperate desire to rid themselves of the fruit, but I believe that it comes from a shared passion that cannot help but spawn the urgent desire to share.

Here is a case in point. Once, last November, just days before I was leaving for Rome, I was walking in South Berkeley with two friends. We parted ways, I was a bit dismayed from not having found a single viable fruit tree to harvest in our walk around the neighborhood. Just as I turned the corner from King to Woolsey Street, I spotted a middle age man, tenderly pruning his fuyu persimmon tree. Overjoyed, I collected myself and we chatted for a bit. He told me that he had more persimmons than he and his wife could eat this season. He sent me home with two brown lunch bags full of beautiful, ripening orange fuyus. 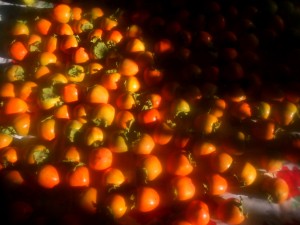 The morning I left for Rome, I cycled around Temescal and Lower Rockridge, running last minute neighborhood errands. I left my fruit picker with Jenn; a bag of apples for the next door neighbors; a thank you note to Linda for the figs. The fuyus I’d been gifted the previous week by the kind man on Woolsey Street were left on the doorstep of another neighbor. In what I thought was this woman’s front yard, there was a handsome hachiya persimmon tree, laden with fruit. Several years prior, I had left the woman a note requesting permission to harvest from her tree. Several days later, she delivered a bag of hachiyas to my front door step along with a note. For some reason, maybe because I was so taken with this tree and thus even more terrified of rejection, I had not approached the woman for two years, but instead, I watched the fruit ripen from a distance, and cycled past in the evening as the fruit shone in the dim light. I re-introduced myself and asked if it might be okay, once again, to harvest several fruit. She told me that she was not particularly fond of hachiya persimmons, but she adored fuyus. As a thank you for her kindness, I cycled over to her house, and I left the bag of fuyus on the porch bench.

Last year, I had the pleasure to create a hanging persimmon installation at August, a boutique clothing shop on College Avenue in the Rockridge neighborhood of Oakland. I cycled around the neighborhood, tapping all my persimmon leads, asking each household if I might harvest several fruits for the show. One house, which has two full hachiya trees on the terraced front garden, allowed me to harvest ten persimmons — such generosity in the wake of such a demand! Every year, this woman is inundated with requests from passers by to harvest from her stately persimmon trees, and she still managed to display such warmth and openness in honoring my request. I harvested the ten fruits well after nightfall, replete with head lamp, and a bicycle basket already full of persimmons gathered from other neighborhood trees. Each time I cycle past this house, I am reminded of the relationship that I have with the woman who lives there. She requested grapefruit in exchange, and once the fruits were ripe, I left a bag on the doorstep with a note explaining the location of the grapefruit tree. There is little like an un-seasonally warm April day, clear skies and the acrid smell of heaps of grapefruit, which have been warming and rotting in the April sun. As soon as you reach the top of a certain hill in Upper Rockridge, you won’t help but be able to notice the smell of the grapefruit, and at least for me, even as I bike past this intersection when grapefruits are not falling and rotting, and smell still hangs heavy in the air.

Lastly, here is a fond memory of a persimmon harvest with my friend Megan during the autumn of 2005. Megan and I cycled towards downtown Berkeley one October afternoon in search of two persimmon trees which Megan had spotted earlier in the season when the fruit was not yet ripe. We had a general idea of the location of the tree, we wove our way around the streets west of the Berkeley farmer’s market until we gleefully happened upon the hachiya trees, which were so heavy with ripe fruit — and also completely out of reach. The tree was glimmering with orange spheres, but it would take either a very confident tree climber or a ladder if we really were to do a serious job on the tree. So, we paused and considered the options, after unsuccessfully trying to scale the lower branches of the tree in order to gain footing to reach the higher limbs. Just at this moment appeared a man who looked like he’d definitely have a ladder in his shed. He did, and he kindly lent it to Megan and me for the afternoon, as we precariously repositioned the ladder, trying our best to harvest the fruit on the outlying limbs of the trees. Somehow, it becomes so tempting to reach for the fruit that is just out of reach. Megan and I were a veritable two person assembly line, alternating between me being in the tree and passing fruit to Megan below, and Megan scaling the ladder and passing down fruit to me.

Eventually, a small but enthusiastic crowd gathered at the trunk, mostly inquiring after the fruit that was being harvested, and there were a few sheepish requests for persimmons as well. Amongst the requests was also a rather forthright demand for ‘more fruit!’ by an older woman who spoke very limited English. Although the language barrier prevented us from exchanging love stories of the persimmon tree, what I did gather was that she had harvested fruit from the trees in prior season, and she arrived with three empty plastic bags, and she requested particular fruits to harvest.

Now, I am in Biella, Italy, a small town in the northern Piedmont region. One Saturday afternoon, at the height of the July heat, Bona and I wondered around a neighborhood southeast of the city center, hoping to eventually find the open market. Before we found the market, we happened upon a beautifully imposing hachiya persimmon tree on Via Addis Abeba. The tree sits on the edge of a lot which is also home to a black walnut tree, a plum tree, and a swath of blackberries. The house that sits in the middle of the lot appears abandoned, and I wonder what will come of the persimmons once they begin to ripen this late autumn, after I’ve moved on from Biella. I have a feeling that the fruit, will, as is so common with persimmons, have countless takers, and there will not be the sad sight of heaps of rotting persimmons at the base of the trunk. While it would be a perfect end to my four month stay in this sleepy town, I doubt I’ll be able to end my stay with a persimmon harvest. But, it’s my hope that all those who are lucky enough to enjoy the fruit enjoy the process thoroughly- from spotting the tree to gathering friends to harvest to patiently waiting for the fruit to ripen and finally, to breaking the little hachiya peak with a grapefruit spoon and savoring the season’s first spoonful of unadulterated neighborhood persimmon.