Kitchen Table Talks No. 6: What You Need to Know About Genetically Engineered Food | Civil Eats

Kitchen Table Talks No. 6: What You Need to Know About Genetically Engineered Food 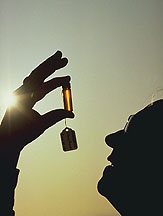 For the sixth installment of Kitchen Table Talks on Oct. 27, about 60 people gathered at the SUB-Mission Gallery in the Mission District of San Francisco to join renowned U.C. Berkeley Microbial Ecologist Ignacio Chapela and Center for Food Safety attorney Zelig Golden for a lively conversation about the past, present and future of genetically engineered food.

For more than a decade, one of the largest genetic experiments in history has been taking place and all of us have been unwitting, or at least non-consenting, participants. According to the Center for Food Safety, up to 85 percent of U.S. corn, 91 percent of soybeans, and 88 percent of cotton (cottonseed oil is often used in food products), is genetically engineered, which means an estimated 70 percent or more of all processed foods on supermarket shelves–from soda to soup, crackers to condiments–contain genetically engineered ingredients.

Whether it’s referred to as GMO, genetic engineering, transgenic manipulation, or recombinant DNA, the process is the same — DNA molecules from different sources are combined into one molecule to create a new set of genes. As he provided a brief historical overview, Ignacio Chapela explained that when transgenic manipulation began in the 1970s, it was the most radical change to ever occur in the domestication of food. “We’re not talking about beer or yogurt making here. When you alter life in this way [using genetic engineering], it has a universal effect on things that are far beyond what the human eye can see or the human mind can imagine.”

Chapela described society’s difficulty to grasp what it cannot see as the first fundamental challenge to understanding the true implications of genetically engineered food. The second challenge is the abundance of disinformation being funneled through the media by corporations whose primary interest is making money through agricultural biotechnology. “From the beginning,” Chapela claimed “It’s been about making money.”

“Why should anyone be worried?” asked Chapela. “By the time I label the concerns, our time is up. We are dealing with something that has a life of its own. In 2001 when I wrote my paper exposing the presence of genetically engineered DNA in wild Mexican maize, I carried with me the concerns of the people in Oaxaca. There, people are corn and corn is people. These were indigenous communities where GMO was already in the DNA of corn when theoretically, there shouldn’t have been any. The result was a campaign to suppress the information and get rid of the messenger. I am a happy survivor, but many scientists who dare to ask questions aren’t so lucky. For every question asked, there’s been a career lost.”

The genetic engineering of food is no longer a just scientific issue, said Chapela. It has become a deeply political and economic issue, which Chapela attributes to the U.S’s insatiable addiction to progress. Early in his career, Chapela worked in the pharmaceutical industry. He remembers a dire letter from the CEO stating that the company was in serious trouble–profits only increased by 12 percent. “The only way to keep economic growth is by co-opting science and technology. Science has become the servant to technological gadget making. We’ve lost public science.”

As Zelig Golden continued the presentation, he explained that genetic engineering is more than a technology problem, it’s a culture war. Just as Rachel Carson outed pesticides, the Center for Food Safety and other organizations are working to hold agricultural biotechnology corporations like Monsanto accountable. Golden then provided an overview of the five important victories won by the Center for Food Safety’s legal team. A complete list of these victories can be found here.

Golden then explained the four myths of GMOs:

Although Europe in the 1980s was quick to develop legislation addressing GMOs, Golden explained that the U.S. decided to stick with a patchwork of existing statutes and laws to create the U.S. Coordinate Framework, which turns out to be the most uncoordinated framework in U.S. regulatory history.  The EPA covers pesticides; the FDA covers food safety and says in all cases that GMOs are safe (if it looks like a tomato, it’s a tomato); and the USDA deals with plant pests and has never once denied a biotech company the right to do a field test or de-regulation.

The chink in the armor of agri-chemical offensive to propagate untested, unchecked GE crops is the National Environmental Policy Act. NEPA requires federal government agencies to prepare Environmental Assessments (EAs) and Environmental Impact Statements (EISs) when an action poses a potentially damaging environmental effect. Yet, since the first introductions of GMOs into the United States, the USDA has never prepared an EIS to analyze and disclose the environmental impacts of GMOs – that is until CFS has successfully forced USDA to do so in two successful lawsuits.

Beyond the ecological, economic and political issues surrounding GE crops is the fundamental issue of patenting life. “All GMOs have a marker inside of them,” said Chapela. “This process of branding life has destroyed seed saving and is turning food production into IT–just as every PC comes with Microsoft Windows installed, every seed will hold have a Monsanto marker.”

As the evening sped by and audience members perched on the edge of their chairs in eagerness to ask questions, it was clear that one evening’s session was not sufficient to tackle the enormity of GE food. The audience had obviously done its homework and compelling questions about the specifics of pending anti-trust legislation, labeling efforts, Gates Foundation work in Africa to promote GE crops, and the Obama administration’s seemingly pro-GMO stance fueled a vigorous conversation and even more questions. Some in the audience expressed feeling overwhelmed by the pervasiveness of GMOs, lack of independent science being conducted on the implications to human health and all life, and the sheer complexity of the issues involved. Chapela reassured the audience that the most important thing to do is be dedicated to asking questions. “There are no easy or quick answers, but we must not give up asking questions.”

The sixth Kitchen Table Talk may have only scratched the surface on the GE food debate, but it was a rousing call to the fundamental philosophical questions at its root. Chapela poignantly summed it up: “DNA has come to be thought of as the operating system of life, but we are not just DNA programs walking around. There are mysteries to life we cannot understand.”