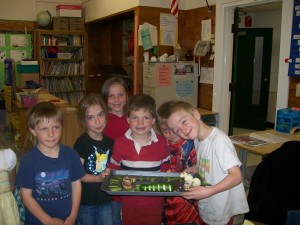 As I entered the gymnasium of Lakeview Union School for Harvest Dinner, students buzzed busily around tables piled with plates of food – quinoa salad, beet and apple salad, pita bread, local Jasper Hill Farm cheese, turkey, squash, corn and mashed potatoes. Many are dishes that these students made themselves in the classroom using local ingredients, and most of the rest was grown in the school garden. A third-grader takes a bite of the pita bread made by the fourth graders and chews thoughtfully. Then he checks a box underneath a smiling face that proclaims, “I liked it!”

My two children are students at Lakeview, a small elementary school of 74 students nestled among the hills in one of northeastern Vermont’s most picturesque small towns, Greensboro. Here, in the heart of a pastoral landscape, you might think that local, farm-fresh foods in the cafeteria are a given. But due to budgetary constraints and other challenges, this hasn’t always been the case. No matter how rich the local food system, it can be difficult to produce quality lunchroom food.

Several years ago, a movement began with students and has grown into a revamping of the school lunch program, with direct-farm purchasing, a school garden, and even a whole-school composting system. It started when two fourth-grade students accompanied Lakeview’s principal, Linda Aiken, to a Vermont Rural Partnership conference and returned with an enthusiastic plan to start a salad bar. With the help of their teacher, they surveyed the students to find out which foods they would want and with food service staff support they set up and began offering it one day a week.

From the salad bar, the idea for a school garden grew – and with it, community interest in the food served at Lakeview. Staff, parents and teachers collaborated to build raised beds for the garden. One student’s grandfather donated his time and machinery to excavate a space for the garden, while another grandparent donated the materials. Ag Day, a biennial celebration of local farmers, launched in the spring of 2006. Farmers bring their animals to the school and children get a chance to experience farming, hands-on.

Alongside the garden, a natural cycle unfolded. The school set up their own worm bin and began composting food scraps. By 2007, the program had expanded, and Lakeview was sending cafeteria scraps to the nearby Highfields Institute in Hardwick, and in return received compost for the garden. Teachers tied the study of composting into science units, and students learned how food that would otherwise be thrown away was transformed into rich nutrients for growing veggies.

The kids loved the garden. My daughter proudly informed me when I had lunch there one day that the zucchini muffins contained zucchinis she had grown, and as I made my way along the salad bar, students pointed out which items came from the garden (most of them!). Dawn Desjardins, Lakeview’s Food Service Director, noticed that the children were much more likely to eat the food that they had grown themselves. She also became an expert at folding vegetable purees into various baked goods and slipping them into soups.

It was in this environment of growing student involvement and enthusiasm that the Farm to School Committee formed in the fall of 2007. I jumped on board. I’m a parent but also a small-scale farmer raising pastured chickens with a personal interest in the farming side as well.

Besides myself, there were other farmers on the committee as well as Lakeview’s principal, the Food Service Director, Jeff Roy, the Maintenance Director (who grew up on a local farm), several parents and three students. We were awarded a competitive grant by the Vermont Department of Agriculture to implement a Farm to School Program. Our objectives were to set up several purchasing arrangements with local farms to buy fresh food in bulk. The foods would be used as ingredients in new recipes that would be taste tested with the students. The most successful recipes would then become part of the food service menu.

With the idea to connect the kids more directly with the origins of their food, the objectives included both a guest farmer coming to the school to talk about what they grow, and field trips to local farms where students would learn more about how the food was grown and even participate in harvesting some produce. Our culminating activity was Harvest Dinner, where the students served dishes they prepared themselves in the classroom, using local foods, including produce from their garden.

The grant funds helped us purchase a refrigerator to store the bulk foods as well as begin construction on a storage shed – a kind of root cellar – for cold storage of root veggies and other produce. Without this infrastructure for storing large quantities of farm-purchased food the project would never have gotten off the ground. It was one of the first logistical hurdles we faced.

The support of food service staff members was key to the program’s success as well. One challenge is that bulk-purchased farm foods require more preparation than packaged foods from a food service distributor. More prep work is required – peeling carrots and potatoes, shredding zucchini, and so on. And there are stringent federal regulations for what foods can go into school lunches and how they must be prepared.

Over the past two years, the school has achieved its grant objectives. Among other successes, farm to school has become integrated into the curriculum, with the kindergarten class experiencing a whole cycle: they grew wheat, harvested and threshed it, ground it and made pizza dough and bread with it. This tied in with a literature unit on the book, The Little Red Hen.

The circle felt completed when parents, students, teachers, staff, farmers and community members joined together to eat locally-grown food for Harvest Dinner last year. The kids were proud to show off what they’d learned, and they felt invested in the dishes that were displayed for taste testing.

That’s not to say there haven’t been some challenges as well. As I mentioned, managing the storage, rotation, and preparation of the foods has been a logistical obstacle to overcome. And the development and coordination of delivery systems, we found, can be particularly difficult. The unknown factors involved in working with bulk-purchased whole foods can cause stress for food service personnel as well. It’s one thing to look at a can of pumpkin puree and see what quantity it provides for a recipe. But how many pumpkins do you need to roast and scoop to generate a certain number of cups of puree? Using farm-fresh food often requires rethinking recipes completely, not just adapting them to fresh ingredients. Yet as much hard work as it is for kitchen staff, they have risen to the challenge.

For farmers, the benefits abound: it’s great to know that you can count on the school to purchase a set quantity of product at specific intervals. It’s also a chance to connect with the community in a new way. Both the school and the farms appreciated the opportunity to keep school lunch funding in the community – there are so many benefits, both tangible and intangible, to exchanging money for goods locally.

Linda Aiken is excited about what’s next for the project. The school is in the process of developing a sustainable plan to continue the initiative now that the grant money is spent. It’s really important to have community and especially parental support, so there’s motivation to continue bringing healthier, locally-sourced lunches to students.

Lauren Ware is a freelance writer living in northeastern Vermont with her husband, two kids, two dogs, and too many chickens to count. She writes about food and food systems, small-scale farming, and parenting, and blogs at Birth of a Homestead. She also covers small-scale farming over at About.com Read more >