Teenagers Like to Grow and Eat Good Food, Too: An Interview with Jorge | Civil Eats

Teenagers Like to Grow and Eat Good Food, Too: An Interview with Jorge 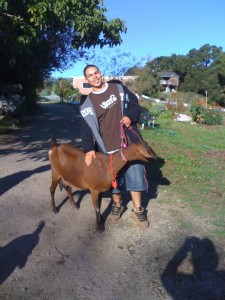 One morning I came out of our house just as Jorge, a young man I knew, shuffled by in baggy pants. He was pouring a bag of Skittles into his mouth.

He nodded sheepishly. I lived on a busy street where from time to time I ran into Jorge, who had attended elementary school with my daughter, Carly, down the block. That campus housed a number of smaller schools, including Costanoa, a district-run program for students who had fallen behind at the bigger high schools. The morning of his Skittle breakfast, Jorge was a sophomore at Costanoa.

Some months later I ran into his mom. She lived with her family in the apartments down the hill from our house, and over the years I had talked with her often as she walked by with Jorge’s younger siblings.

“He’s doing well,” she said in Spanish. “He’s working in the ROP garden at school, and he loves it so much he wants to apply to the horticulture program at Cabrillo [College].” When Costanoa moved to our campus, they had expanded the Life Lab garden halfway across the playing field. Students on campus labored in the garden and cooked from the bounty.

“He’s looking for space to start a vegetable garden for the family,” she said. Holding a cloth shopping bag, she said she was on her way to the natural food store to buy produce.

Jorge was a senior when I saw the flyer with his name on it. In conjunction with Food What, a food and health program using sustainable agriculture to empower youth, Jorge and his schoolmates were hosting a Harvest Festival at the Life Lab on the UCSC campus. As a member of our district Wellness Committee, I planned on attending the event to help Jamie Smith, our district’s new Director of Food Services, cook farm-fresh pizzas in a wood-burning oven.

It was a clear morning in October when I walked up the hill to the Life Lab garden overlooking the Monterey Bay. High school students were busy setting up stations for the festival, including one for carving pumpkins grown in the garden, one for tasting honey produced by the resident bees, and what turned out to be Jorge’s favorite, a hayride along the hill overlooking the ocean.

I found Frannie, who helps run the garden, stoking a fire in the wood-burning oven, a hive-like structure made of hay and mud. On a table next to the oven were jars of tomato sauce made from the Life Lab’s tomatoes, plus vegetables and herbs from the garden.

By ten when the students arrived, Jamie and Frannie were slinging the pizza dough Jamie had made early that morning, and students were eating slices with pumpkin, chard, onions, peppers, herbs, and even figs, faster than we could make them. The pumpkin tasted so sweet one student asked if it was pineapple.

I tracked Jorge down a week later, when he agreed to talk with me about his experience with Food What and the Agriculture program at Costanoa.

CE: How did you end up at Costanoa?

Jorge: When I went to [a regular high school] I started ditching class because … it felt like my teachers didn’t know how to teach a whole group of people. I felt like I was getting left behind. I stopped going to school, started hanging out with friends. We would all ditch together, eat at Del Pueblo, walk to the park.

The days I showed up at school … I would always feel lost…The principal met with my parents because of my low attendance. I hadn’t even attended a third of the year. He said I had to go to alternative school to make up the credits. My brother, who’s twenty now, was at Costanoa and I wanted to try it.

CE: How did you get involved with Life Lab?

Jorge: At Costanoa I signed up for the Agriculture ROP class. I remember the garden [from elementary school] but it was totally different…I always wanted to work with plants; my dad has been in landscaping for twenty years. But it’s much more fun starting plants from seed, watching them grow, taking them outside and seeing them thrive. I love being outside. It’s my favorite way of learning…I’d rather do heavy work outside than work in the classroom.

When [the director of Food What] Doron came to Cosatnoa, he kept making jokes and throwing apples from his farm to the kids. My friend said, ‘You’re a farmer, you should try that.’ The next thing I know I was working during the spring internships…. after school with other Costanoa kids at UCSC Farm. I remember the chickens and the Venus Flycatchers from [field trips] when I was a kid. But when I came this time, the feeling of being there…it was like a relief. You forget about everything.

CE: Tell me about the garden you started at your grandma’s house.

Jorge: Two inches under the dirt at our apartments is concrete…so my dad put plants in pots. But the manager said no plants in pots. So we took to them to my grandma’s house. She has a huge back yard. I was thinking, ‘Why not start a garden?’ The first year [the plants] didn’t grow because of too much shade from the trees. Then my brother cut down the apple tree in the middle, and the next season I grew all kinds of vegetables.

All the water came from the creek running through her backyard. I planted forty tomato seedlings from [ROP teacher] Lisa Glick all around the border. That made me always want to be there, made me want to keep growing food for my family. I’d rather have my family eating something fresh and homegrown than food that comes from far away and is expensive.

CE: How have you changed since you started the ag program at Costanoa?

CE: You’re graduating in the spring. Will you continue the horticulture program at Cabrillo?

Jorge: Last year I took Edible Landscaping [at Cabrillo]. Next year I want to take a bunch of agriculture classes [like] Sustainable Landscaping. Green roofs, solar panel, water catchers, especially here with six-month drought season. I’d like to learn how to install solar panels, or learn how to make them, that would be even better.

CE: How have the ROP class and Food What changed the way you eat?

Jorge: It makes me focus on eating vegetables. After I learned about methane gas and the carbon footprint of cows, I didn’t eat beef for one and a half months. Then I went to a party and there was all this beef and I couldn’t help it. But now I eat less meat than I used to.

CE: Do you still eat Skittles for breakfast?

In the thirteen years I had known Jorge, I had watched both him and the life lab garden at his school grow. Now I looked forward to being part of the expansion of the Life Lab at our neighborhood Branciforte Middle School, where federal stimulus dollars would pay for a new playing field that would include a garden large enough to accommodate all the science classes. Because if students were offered Skittles when they were hungry or craving something sweet, they would eat them. But if they were offered farm-fresh pizza with pumpkin that tasted like pineapple, they’d eat that too. And if they were taught about the sustainably grown pumpkin, they would learn how to grow it along with all kinds of other organic produce. They would taste the bounty of their labor and would want their families to taste it. Those students, who might otherwise grow obese from government-issued lunches, who might otherwise drop out of school because they didn’t see the point of sitting in a crowded classroom, would become invested in their own health, and not incidentally, their own future. As a member of the Wellness Committee aiming to change the lunches and nutrition education in our district, I looked forward to being a part of that future.

Photo: Jorge with a goat from Harley Farms