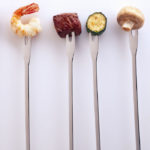 Hospitals around the country have taken a crucial first step toward building a sustainable meat production system by joining the Balanced Menus Challenge. Launched in late September, the Balanced Menus Challenge is a voluntary commitment by healthcare institutions to reduce their meat and poultry offerings in patient meals and hospital cafeterias by 20 percent in 12 months. Balanced Menus is a climate change reduction strategy that also protects the effectiveness of antibiotics and promotes good nutrition. Fourteen hospitals are already participating in the national challenge, which was developed and piloted by the San Francisco Bay Area Chapter of Physicians for Social Responsibility and nationally launched in partnership with Health Care Without Harm’s Healthy Food in Healthcare Initiative.

Americans eat an average of eight ounces of meat daily, roughly twice the global average. Hospital food service operations often mirror this trend, offering sizable servings of meat several meals per day. High consumption of conventionally produced meat and processed meat contributes to an increased risk of cardiovascular disease, obesity, diabetes, metabolic syndrome, dementia, and some kinds of cancer. Overconsumption of meat contributes to the overwhelmingly high cost of the U.S. healthcare system (estimated to be $147B as a result of obesity management alone) as well as environmental damage such as climate change, water and air pollution.

Hospitals buy vast amounts of meat, typically through large distributors who source from the U.S. commodity beef, pork, and poultry markets. U.S. food production relies heavily on fossil fuels, and red meat production is particularly energy intensive as it requires significant inputs of synthetic fertilizers and pesticides to grow crops for feed. The food system accounts for over 10 percent of overall energy use in the United States. Globally, livestock for meat and dairy production accounts for 18 percent of greenhouse gases, more than all of Earth’s cars, trains, and planes combined.

While food choice is distinctly personal, the healthcare community should be at the forefront in modeling a healthy food agenda for the nation. Encouraging a reduced and sustainable meat diet is part of a primary prevention agenda to reduce the nation’s chronic diet-related illnesses, but also contributes substantially to climate mitigation, clean air and water, and protection antibiotic toolkit.

Most U.S. meat is produced under a system that relies on the routine feeding of antibiotics to make animals grow faster and consume less feed grain. Arsenic compounds and hormones are given to animals for similar reasons. These additives further contaminate animal manure, which then moves off the crowded facilities, polluting land, air and water. Sustainably-raised meat and poultry precludes the use of antibiotics for non-therapeutic purposes. Approximately 70 percent of all antibiotics used in the U.S. are given to healthy animals to promote growth and compensate for crowded conditions and poor husbandry practices in conventional animal production.

As institutions with considerable buying power, hospitals can demonstrate leadership to the marketplace by reducing the overall quantity of meat and poultry served and through purchasing of sustainably-produced meat. The healthcare sector is increasingly aware of its responsibility to model healthy behavior for the community. Reducing their meat purchasing will help reduce the overall cost of medical care in this country, with benefits ranging from savings in actual food service costs to reduction in pollution, but most importantly, to contribute to healthy lifestyles that will improve the health of Americans.

“It was amazingly simple to make an impact on our carbon footprint by starting with small changes in our cafeteria and working our way up to the more complex patient menu,” said Linda Hansen, CDM, CFPP, Director of Nutrition Services at St. Joseph Health System in Sonoma County, CA. “By implementing Balanced Menus for the last six months, we are able to remain cost neutral, or even achieve savings for the hospital, not to mention the savings to our healthcare system that result from providing patients, staff and visitors healthier foods.”

“As we debate healthcare reform in the U.S., it is important to recognize that eating less conventionally produced meat will reduce drivers of many of the major chronic diseases that threaten the sustainability of our health care system stated Ted Schettler, MD, MPH, of the Science and Environmental Health Network. It is good for people and good for the planet.”
Click here for more information about the Balanced Menus Challenge.

Lena Brook is Senior Program Associate at SF Bay Area Physicians for Social Responsibility and serves as the Northern California Organizer for the Healthy Food in Healthcare Initiative working to harness the power of the California health care sector to redefine the meaning of hospital food and accelerate the transition to a sustainable, community-based food system. Since 2008, she has served as a Fellow with Roots of Change, and in May 2009 launched a parent advocacy campaign to reform school food programs at the San Francisco Unified School District. Read more >