From Lawn to Garden, Building Community 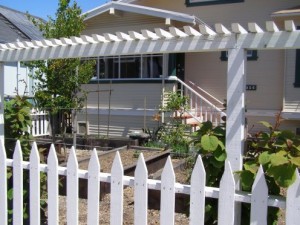 In neighborhoods around the globe people gather on their front porches to commune, but our busy street, while friendly, is not like that. Yet a landscape change Blue and I made for environmental reasons brought us unexpectedly closer to our own community.

A few summers ago we took out our front lawn, and by removing the weed and gopher-ridden turf and disabling the sprinkler system, we started saving 18,000 gallons of water a year. We put in a drip system whose sprinkler heads consumed a couple of gallons per watering, versus the hundreds per watering of conventional sprinklers.

We replaced the lawn with vegetable beds that soaked up the sun bathing the front of our house. My brother-in-law Eamon built an arbor over the picket fence, and we planted kiwi and grape vines to grow up over the arbor and provide a covering, thereby discouraging passers-by on our busy street from picking the vegetables. The vines would take a few years to form a covering, though, and in that time we never lost so much as a tomato.

Our son Eliot (whose placement somewhere on the autistic spectrum made him act younger than his ten years) helped me plant tomatoes, lemon cucumbers, and blueberries in the new beds. He watered the seedlings and helped me release a can of ladybugs on their leaves in the evening. I told him the ladybugs stay overnight and lay their eggs on the plants, which propagate new ladybugs to eat the “bad bugs” eating the seedlings. Eliot was fascinated with insects, partly based on fear and his ability to take the minute and make it larger. He spent a lot of time in the garden scouting the insects and watching his beloved bees gather pollen in the flowers, which he called “rosenflowers.”

But the best part about our new garden was that it got us out in front of the house with our neighbors. The evening we released the ladybugs, our neighbor Grandfather Tea walked by. His granddaughter was a quiet, bright girl whom our daughter Carly had known since kindergarten, and with whom she had become closer friends in middle school. While her parents worked full time in a Chinese restaurant, Carly’s friend lived with her grandparents just around the corner from us, but it wasn’t until Grandfather Tea walked by the front yard where I was picking vegetables that he and I had our first conversation.

One afternoon that summer I started digging out the weeds pushing through the cracks in the sidewalk in front of our house. It was painstaking work bending over a flathead shovel in the heat, scraping at the concrete. When work with the flathead shovel produced little more than lower back issues, I got down on my knees with a tool and dug at the roots deep in the cracks.

It was when I was on my knees that I spoke for the first time with two different people who had been walking by my house every day for years. One was a neighbor who lived with his mother, but hung out on the streets and talked to himself as he passed my house. We’d never said more than hello. But the day I was on my knees digging at the cracks in the sidewalk, he passed by and said, “That’s hard work. I know, I’ve done it.”

I stood and saw the neighbor who often sat on the curb where I was now raking up weeds and dirt. He hand-rolled cigarettes and stared at the figures that raced across his vision, and for which he was heavily medicated. Most days he was lost in a fog, but when he was lucid he was always friendly. The day I raked my weeds, he looked up and waved.

I got down on my knees again to dig deeper in the cracks, and the man who always wore a helmet walked by. I imagine he wore the helmet for medical reasons to protect his head from falls. We had never spoken, although we’d said hello. This time he bent down until his eyes were level with mine, and we talked for a moment about the weeding. Before he stood to go, he patted me on the shoulder and said. “Keep up the good work.”

Two of the neighbors with whom I exchanged greetings that day had lives that revolved around the street, and by being in the street myself I was blessed by their presence. Christians are taught to find the holy in unexpected places, and certainly that day I did.

This article originally appeared in the San Francisco Chronicle.