An Interview with Nicolette Hahn Niman 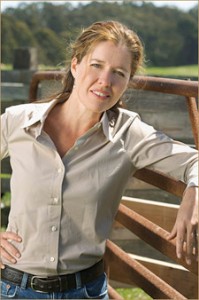 Nicolette Hahn Niman has been thinking about livestock for nearly a decade. Before she married (and began ranching with) Bill Niman, founder of Niman Ranch*, Nicolette worked as a senior attorney for Waterkeeper Alliance where she was in charge of the organization’s campaign to reform the concentrated livestock and poultry industry. Nicolette spoke with CUESA recently about greenhouse gas emissions, the sustainable livestock tipping point, and her book Righteous Porkchop: Finding a Life and Good Food Beyond Factory Farms (HarperCollins, 2009). She also authored a New York Times op-ed on Saturday called The Carnivore’s Dilemma.

What made you want to write Righteous Porkchop?

Many of the books on this topic have been written by people who are totally opposed to raising animals for food — they think it’s ravaging the environment and that it’s inherently inhumane. Then there are people who think we can all eat as much meat as we want, and they believe the criticism of over-consumption is hype, that it’s coming from a bunch of “wackos.” I think that if done in the right location and at the right scale, livestock farming is a very valuable part of food production. I heard Fred Kirschenmann say recently that he knows of no healthful ecosystem that doesn’t involve animals; I agree with that. I believe sustainable farming really should mimic nature and nature involves plants and animals and they work together. On the other hand, I believe that meat should be consumed in moderation — like dark chocolate and red wine.

If you ask people if they eat meat in moderation, it’s likely that the vast majority would say yes. What’s your definition of “moderation”?

I’d say no more than once a day. My husband is an interesting case study; he transitioned from being someone who often ate meat two times a day to being married to me for the last 6 yrs — I’m a vegetarian and do all the cooking in the house — so he now eats meat less than once a day and smaller portion sized than he used to. I’d say he’s reduced his consumption more than 50%.

He’s really aware of all the concerns surrounding livestock production, and he and I are both aware that meat is resource intensive. I believe each person has a responsibility to not take more than their share of the world’s resources.

Is there enough land to produce all the meat we currently consume in this country on pasture?

Well, we would have to reduce the total number of animals produced — at least somewhat. But I like to point out that when you’re raising animals in confinement, you end up using a lot of land — the animals just aren’t on it. You still have to raise the crops to feed those animals and then you have to re-apply the waste to land.

When it comes to non-grazing omnivores like pigs and chickens, a rotation system that has them pastured on land between using it to grow crops — in my view that’s actually a more efficient use of land than raising them in confinement.

It would certainly require more land when you’re talking about cattle, and I’ve never seen a good calculation, but I don’t think it’s an amount of land that couldn’t be found. There is data [pointing to the fact that] pasture is an incredibly good use of land, compared to crop land.

Earlier this year, there was a lot of discussion of a study that said that grass-finished beef accounted for more greenhouse gas emissions than corn-finished beef. What’s your take on data like that?

I have heard evidence that when you have range-fed animals, especially if they’re on poor quality range, that they produce more methane than feedlot animals. But, because the overall GHG emissions are so much less when you’re talking about traditional meat production versus factory style or feedlot production, it’s not a compelling argument just to isolate that one issue.

I looked at a paper out of Scotland that linked emissions to grass fed animals that were raised on land with a lot of agricultural chemicals applied to it — herbicides, pesticides and fertilizers. The majority of cattle in the US are living on land that has not been chemically treated and certainly has not been fertilized. It’s also possible to provide fairly simple supplements in the form of a mineral lick, etc. that will actually reduce enteric emissions from cattle grazing on poor quality pasture. There are a number of different ways that it can be addressed and I honestly think it’s kind of a red herring.

Do you see signs that big agribusiness is taking notice and feeling threatened by the movement to produce and eat meat in a new way?

I think that we’re getting close to a tipping point. There are enough people who have enough information and agribusiness has had to face the fact that none of this is going away. When I started working on these issues eight years ago, the mainstream food industry still thought that if they just kept ignoring the opposition, it would go away. Now, they recognize there’s writing on the wall — people are more interested in knowing where their food is coming from, they’re more concerned about food safety. They care about quality, seasonality, food miles, etc. — all these concepts are coming into mainstream parlance that were French a decade ago.

Is there anything else you want to add?

When they hear about industrial livestock production, a lot of people say I’m just going to stop eating pork – and I’d say please don’t, because then the farmers who are doing it right aren’t getting your support. I also think it can be fun to explore new foods and new places, and to get a better taste experience. I want to get people thinking about [eating a variety of pasture-raised meats] as an adventure — because once you embark on it, that’s what it becomes.

*No longer affiliated with Niman Ranch, the couple now maintains their own BN Ranch in Bolinas, CA.