The Lemon Lady: Feeding the Hungry, One Bag of Produce at a Time | Civil Eats

The Lemon Lady: Feeding the Hungry, One Bag of Produce at a Time 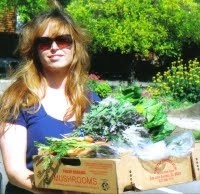 Anna Chan, 37, has outgrown the title, which doesn’t begin to describe the difference this anti-hunger activist has made in less than a year in her one-woman campaign to get fresh produce into the mouths of people in need in her community.

This stay-at-home mom from Contra Costa County, California has (almost) single-handedly harvested, by her own estimates, 12,000 pounds of local produce from neighbors’ front yards. She’s also collected more than $60,000 surplus fruit and veg from local farmers’ markets, which she hauls in the back of her SUV to food pantries in her area. And she’s donated hundreds of seedlings and helped plant veggie gardens in her county in the hope that she can inspire others to grow their own row — and feed their families whole food.

In September I spent several hours watching Anna in action. We met at one of her many pet projects, a modest but thriving veggie patch in a low-income neighborhood of Concord. (Anna got involved with the garden after being approached by Kathy Gleason,  corporate donations coordinator for the Food Bank of Contra Costa and Solano, who sewed the seeds for this edible effort on her own time by getting to know the neighborhood and seeking out other volunteers.)

Out of one of the apartments popped a proud mom who gave me a spontaneous tour of the garden before Anna even pulled up. Begun with seedlings tended and donated by The Lemon Lady, the summer bounty included tomato, eggplant, pepper, and squash. When Anna arrived, the three of us chatted about the challenges of raising corn and the ease of growing Asian greens such as mizuna. We were just three moms, one Japanese, one American, one Australian, talking about the joys of making tomato sauce from scratch with homegrown produce to feed our hungry kids.

Before we left, Anna gave the grateful woman a seed catalog, with the promise of more seeds to come for a fall crop. Next stop: The lively Concord Farmers’ Market, where Anna distributes cardboard boxes and chats with vendors when they’re not serving customers. Farmers such as the pear purveyors from Alhambra Valley Farms and the Bautista Ranch veggie peddlers willingly pack up leftover produce for her to cart away at the end of the market to take to local food pantries, including the Salvation Army, SHARE Pantry, and Monument Crisis Center.

While the market was in full swing, I sat down with Anna to get a sense of what drives this former office manager to spend hundreds of hours volunteering for the greater good, one piece of produce at a time.

Reading between the lines, I suspect that a challenging childhood, made a little less rough by the kindness of strangers and community volunteers much like herself, serves as a constant reminder of the importance of giving back.  That’s not some pat charitable phrase for this petite and pretty woman; she knows what it’s like to encounter tough times and deal with health concerns. Now, blessed with a thriving toddler, a supportive dentist husband, and a happy home life, she wants to help others less fortunate than herself. Plus, the gal has a big heart, a passion for nutritious home cooking, and energy that doesn’t quit. (Typically she does a farmers’ market surplus run four days a week.)

Anna’s efforts add a public service spin on the au courant activity known as fruit foraging. She combines two old-fashioned concepts: gleaning and doing good, and in a time of great need (one local food pantry recently closed for a day; demand is so high it ran out of food) she simply cannot stand to see perfectly good produce go to waste.

Not surprisingly, those she comes in contact with sing her praises. “She’s a local gem,” says Jessie Neu, the director of the Contra Costa Certified Farmers’ Market. “She’s a life saver,” says one food-distribution volunteer from a local food bank. The California Garden Clubs recently honored Anna for her community service and her efforts to promote growing greens and getting fresh, nutritious food to hungry people.

And it all began way back in February, when this suburban mom was simply trying to find a way to soothe her colicky child to sleep. Anna resorted to driving her fussy, nap-fighting toddler, so Ava would drift off to the Land of Nod. (Oh, boy, do I remember those car rides from my own sleep-resistant son’s early days.)

As Anna tooled around her neighborhood she saw trees laden with luscious lemons ready to drop and rot. Where others saw potentially fallen fruit, Anna saw good food needing a way to get to the hungry.

So she worked up the courage to knock on strangers’ doors to ask homeowners if she could collect their excess fruit for local food pantries. And she left fliers letting her neighbors know that she’d noticed their bounty and wondered if they’d be willing to share their surplus by leaving a bag or two for food bank donations, or allow her to pick their extra produce. The response? Overwhelmingly positive. People have happily donated lemons, as well as oranges, apricots, plums, peaches, tomatoes, beans, and zucchini.

Anna’s on a mission to spread the word that many food banks gladly take fresh produce. “Many people don’t know where their local food pantry is located and don’t realize that food banks will gladly take fresh produce,” says Anna. A lot of people, she points out, incorrectly assume that only canned goods or government surplus food is acceptable in such places. Not so.  (Check out a revealing New York Times Magazine article for the back story on why food banks are now accepting more fruit and veg in the recent Food Issue.)

To learn more about The Lemon Lady, visit her blog, where she champions the work of food banks and farmers, shares the joy of growing food with her daughter, and encourages others to follow her example in their own communities.

Click here for one of her favorite baking recipes, lemon bars, of course.