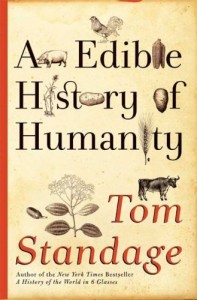 Just twenty years after humans cease to exist, our vegetable gardens will have reverted back to “unpalatable wild strains.” So envisions Alan Weisman in The World Without Us, a reminder that the history of food has run in parallel to human development. Put another way by Tom Standage, “The story of the adoption of agriculture is the tale of how ancient engineers developed powerful new tools that made civilization itself possible. In the process, mankind changed plants, and those plants in turn transformed mankind.” This course is the focus of An Edible History of Humanity, his account of how food has influenced world history.

In his introduction, Standage explains his view of food by what it is not: “This account does not claim that any single food holds the key to understanding history; nor does it attempt to summarize the entire history of food, or the entire history of the world.” The textbook framework serves to provide space to illustrate the “the intersections between food history and world history”—and Standage is convincing when establishing the historical role of food.

An Edible History of Humanity explores the emerging story lines of maize, wheat, rice, sugar, spices and the potato, verifying that we have a tumultuous relationship with our most essential necessity. Furthermore, our progress depends on its surplus. If we have enough to eat, we can afford to do other things with our time. And we do. Food exerts its power in all parts of culture: politics, history, economy, psychology and science. Standage explores a half-dozen instances of influence, one of which is the spice trade and colonial expansion.

Herodotus spoke of the mythical origins of cinnamon in the 5th century B.C.: “The Arabians say that the dry sticks, which we call Kinamomon, are brought to Arabia by large birds, which carry them to their nest, made of mud.”  A divine bestowal to Herodotus, cinnamon was already a commodity by the 1st century B.C. Spices’ exoticism influenced through “mysterious and distant origins, their resulting high price and value as status symbols, and their mystical and religious connotations,” and made room for global trade, which in turn expanded our worldliness and the spread of Islam and Christianity. Later, the demand for other luxury items like sugar resulted in the Atlantic slave trade when a labor force was recruited for large-scale sugar production.

Pages on the role of wheat within Stalin’s collective farming campaign and Mao Zedong’s Great Leap Forward shows that as cereal is commoditized, it also becomes an “ideological weapon.” But in contrast to ideology, food is still fuel at its most basic level, and Standage’s chapter on war teaches this obvious lesson by looking at warfare. Alexander the Great pioneered the use of port-to-port supply stockpiles, the British lost the Revolutionary War because they were dependent on that same strategy, and Napoleon mastered the art of foraging (until his army starved, resources dried up).

Chapters end with closing thoughts on current food wars that seek to connect historical episodes with present day context. Each attempt to “illuminate modern debates about food” through the use of history (the rise of agriculture, the effects of the industrial revolution, the energy crisis, local versus traded goods), makes this book more than an unofficial textbook. But Standage’s personal criticism often lacks depth. As the business editor at the Economist, he certainly is opinionated about food in history. Yet when he advocates for a second green revolution, he envisions an abstract middle ground between organic and conventional farming. The agricultural industry would still be dependent on chemical fertilizers, especially in third world countries, where excess food production does not exist. He is accepting of organic farming but keeps the method at a distance, advocating for conservation tillage (also known as no-till) only in areas of the world that could support this method. Ultimately, the attempt to bridge an economy-based view with an environmentally-minded suggestion is unconvincing and Standage’s position remains detached, hazy and dilute.

An Edible History of Humanity is not a chronological history, nor does it claim to be. Chapters tell individual stories, complete with statistics showing that food has been central to our progress. Picture proto-farmer Mexicans in Central Mexico, gathering mutant forms of the wild grass, Teosinte, and eventually transforming it into maize; the first hothouse invented in the 1680’s which allowed botanists the chance to grow foreign seeds, find remedies for plant disease and control the “link between botanical and geo-political mastery;” Fritz Haber and Carl Bosch in the early 1900’s, creating ammonia from hydrogen and nitrogen, later used in explosives and fertilizer.

Standage saves space to consider our future in broad terms, “Someday a nuclear war, an asteroid striking earth, or some other global calamity might make it necessary to rebuild human civilization from scratch, starting with its deepest foundation: agriculture.” Perhaps all we need to understand from this survey is that should we be faced with such a task of rebuilding, at least we know it’s been done before. Securing a food supply will continue to be our inevitable first task.