Taking the Plant's Point of View: The Botany of Desire on Film (VIDEO) | Civil Eats

Taking the Plant’s Point of View: The Botany of Desire on Film (VIDEO) 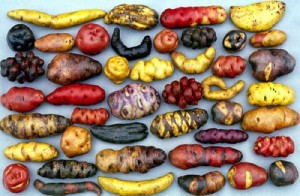 The Botany of Desire is not a political book. But as the author, Michael Pollan, said last Thursday in New York City at a debut of the film version (which airs tomorrow night on PBS at 8pm EST), it was the “sourdough starter” for the books that proceeded it, like The Omnivore’s Dilemma and In Defense of Food. Specifically, writing about potato production in the last quarter, which focuses on large scale agriculture and GMOs, was “the wake-up call” that led Mr. Pollan to understand that our food system is unsustainable.

The film is not necessarily supposed to be political, either. However, it does bring up a lot of questions about how we view our relationship to the plants featured: apples, tulips, cannabis, and potatoes. Primarily, the documentary focuses on how these plants used our desire for sweetness, beauty, intoxication and control to enable their propagation. But to propose that somehow plants have cultivated us is still revolutionary eight years after the book’s debut.

The director of the film, Michael Schwarz of Kikim Media, immediately saw the potential for a documentary upon receiving the manuscript from Pollan in 2000. When he ran into trouble seeking funding for a program that offered a different story about cannabis than that presented by the War on Drugs, one donor suggested they switch to wine grapes. But the duo stayed true to the story. “This seemed to me to be a really bad idea,” Mr. Pollan said, “in part because the marijuana section is really interesting, and also because what kind of message would that send?”

However, the cannabis section of the film focused specifically on what we have learned about the science of the brain from this drug, and felt much less risqué than the original text. By contrast, the final quarter of the film dealing with potatoes felt amplified, either in light of Mr. Pollan’s later works, or in comparison to the more historical focus of the apple and tulip sections of the film. Potatoes enabled the film to enter into the discussion of large scale versus small scale farming, monocultures and issues of food security (with a comparative look at the Irish potato famine, where the single type that farmers grew fell prey to disease and a million people starved while another million emigrated), and the debate over Genetically Modified Organisms (GMOs).

Notably, the diverse audience at Asia Society that evening latched onto these controversies, asking some mundane questions (such as “How wide spread are GMOs?”) and some profound (Are GMOs fundamentally a flawed science, or do they have a proper application?) that Mr. Pollan, also the Knight Professor of Science Journalism at UC Berkeley, answered by discussing the history of GMOs as a policy decision, the European opposition versus the US acceptance of GMOs (they don’t trust their regulators, and we trust ours too blindly; the fact that our technology is being thrust onto them) and how to avoid buying them by shopping the perimeter of the grocery store.

It felt like the audience left more aware than they had come, and I had to wonder if indeed this film could be more effective at informing people about the food system simply because the dose was encased in engaging, beautiful imagery focused on a more profound message about who were are as humans.

Check out the trailer for the film, below, and then watch it on PBS tomorrow night.