Why We Harvest: An Urban Fruit Gleaning Manifesto | Civil Eats

Why We Harvest: An Urban Fruit Gleaning Manifesto 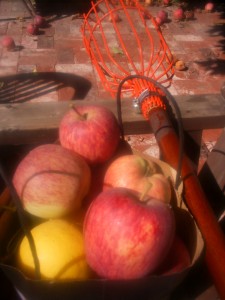 Imagine gathering several friends for morning, midday, evening or weekend foraged city bicycle rides through your neighborhood. Rough maps are drawn, noting the forage-ables that can be found at each location and ‘cold calls’ are made to your neighbors asking if you can sample a fruit from their backyard tree. You have the courage to introduce yourself (despite the pervasiveness and acceptance of urban anomie) and they reward your neighborliness with a sample of Santa Rosa plums, for example. Later, when you find yourself with a surplus of Persian mulberries, you, in turn, deliver a small basket to said neighbor. With time and in this fashion, a community of people who care for and know one another is built, and rather than being the exception, this could be the norm.

This is not idealistic, rather it is necessary, pragmatic, and creative — especially in times when much of the world is suffering from lack of access to healthful and satisfying fresh food. Forage Oakland is a project that works to construct a new model, and is one of many neighborhood projects that will eventually create a network of local resources that address the need and desire for neighborhoods to be more self-sustaining in meeting their food needs. At its core, it works to address how we eat everyday, and how everyone can benefit from viewing their neighborhood as a veritable edible map, considering what is cultivated in any given neighborhood and why, and what histories influence those choices. The gleaning of unharvested fruits; the meeting of new neighbors; the joy of the season’s first hachiya persimmon (straight from your neighbor’s backyard, no less); the gathering and redistribution of fruits that would otherwise be wasted — can be powerful and can work to create a new paradigm around how we presently think about food in our collective consciousness.

I moved to the Bay Area in late August 2004, just after finishing college. What I remember about that first taxi ride from the Oakland airport to my new house at Oregon and Martin Luther King Jr. Way in South Berkeley are the pastel colored squat houses graced with citrus trees in the front yard. Some of the houses along Ashby between San Pablo and Sacramento Streets looked a bit derelict to my eyes, and I found it curious that they would have fruit trees in the front yard. I considered fruit trees to be a display of abundance, wealth, or stability, somehow seeming out of kilter with a house that might house transient residents.

But I soon learned that many of the houses in South Berkeley and North Oakland, regardless of the socio-economic status of the residents, are graced with fruit trees. I found this fascinating. I spent a year living in this house on Oregon Street, more or less oblivious to the bounty around me. While I passed the citrus trees every day, along with other fruits which were, at that point, less recognizable to me, I hadn’t begun to think about the politics of the harvesting, sharing, and possible redistribution of the neighborhood fruit. So, for some time, I happily noted the fruit trees in my neighborhood, and surely appreciated their aesthetic appeal, but the interaction was more or less passive.

The following school term, I began a one year position working at the Edible Schoolyard, which is a school garden based at Martin Luther King Middle School in Berkeley. There, I worked in the ¾ acre garden along side the 6th, 7th, and 8th grade students, guiding them in exercises of cultivating, composting building, harvesting and propagating seeds. This was the first time I’d spent such an extended amount of time in a garden and this experience was an awakening, as it suddenly brought to life the countless fruit trees that I passed in my daily travels through Berkeley and Oakland. In due time, I could identify the various fruit trees in my neighborhood, from the passion fruit vines to the loquats to the kaffir limes. A new enthusiasm was borne as I became aware of the countless possibilities of exploring my neighborhood anew. 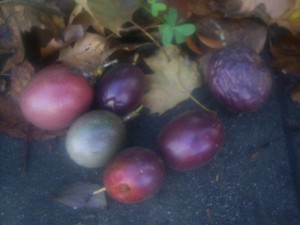 I began to redefine my neighborhood has an abundant place filled with an ever-changing variety of edibles. I mapped new geographies of the streets I crossed, and with time I became increasingly aware of the nuanced changes in the season that would produce green walnuts perfect for nocino or passion fruit at their prime. Fruits’ coming into season became a secondary calendar with which I gauged the passing of time. I marked the beginning of the spring with the first loquat harvest. Nowadays, five years later, this is all second nature. But, it was only in moving to Northern California that I became more keenly aware of how the seasons change a bit each day, as I could actually see (and taste) these changes for myself. I could know exactly when pears were at their peak by cycling over to 45th Street and harvesting a pear for myself. During plum season, my neighbor on Lawton Avenue would leave a basket of ripe plums for passers by; there was no questioning whether plums were in season.

Coming to these conclusions regarding my food choices as a young adult has been richly empowering and not as linear or obvious as one might think. There has never been a clearer moment for me to understand that what I decide to eat has a direct and immediate impact on others than during the five years I’ve spent in the Bay Area. There is a dedicated community of activists, farmers, eaters, and cooks who are all deeply committed to educating themselves about their food choices with the hope that they will be able to make a well informed decision regarding the producers they support. When presented with the choice, what could be more powerful than taking such a precious matter into one’s own hands?

Forage Oakland is about viewing food as a shared pleasure and a shared resource, and redistributing it to those who will enjoy it. Invite your neighbors to exchange their surplus peaches for their neighbor’s surplus blackberries. Leave a fruit basket on your neighbor’s doorsteps: apples by the pound, Santa Rosa plums, sour cherries, persimmons, pineapple, guava, and apricots. New associations will form, and new geographies will be created. The street corner where Ashby Street and Martin Luther King, Jr. Way meet will no longer be marked by its corner store, rather it’ll defined by the prolific fig tree on the northeast corner. Encourage your neighbors to share their backyard bounty and barter what they don’t intend to use. Hop on your bicycle and redistribute the surplus to another neighbor, making a note of the location of the harvested bounty. An edible landscape can be formed that is interactive, a bit different every day as fruit ripens and falls and as the seasons change. The barter can translate to other areas of urban living, and can create a community of people who’d rather do it for themselves and play an active role in their consumerism. When there are plums in your neighbor’s backyard, enjoy them with your neighbor!