A Nation of Farmers: A Handbook for Food System Revolutionaries | Civil Eats

A Nation of Farmers: A Handbook for Food System Revolutionaries 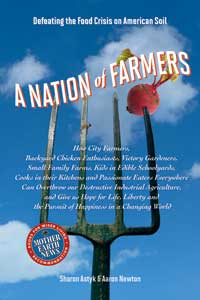 A few months back, I picked up a book by Sharon Astyk and Aaron Newton from a stack of review copies on my table, opened it and began to read. There had been very little press coverage of this book, but the title boldly re-created the world the food movement is working towards, and thus attracted my eye — A Nation of Farmers: How City Farmers, Backyard Chicken Enthusiasts, Victory Gardeners, Small Family Farms, Kids in Edible Schoolyards, Cooks in Their Kitchens, and Passionate Eaters Everywhere Can Overthrow Our Destructive Industrial Agriculture, and Give Us Hope for Life, Liberty and the Pursuit of Happiness in a Changing World. That is a huge subtitle, to be certain, but even bigger is the authors’ request: for 100 million farmers and 200 million cooks. The book details the state we find ourselves in (peak oil and general resource scarcity, climate change, lack of political will, soil depletion), takes on the false ideas that keep us stuck in the current system, and discusses the potential and context for a paradigm shift in how we approach these crises — and, dare I say it, creates a vision of a future more gratifying than our current status quo.

“We have, in only 60 years, gone from a people who could supply our own needs to being the most dependent people in American history,” Astyk and Newton write. It was World War II when we were last asked to band together and sacrifice for a better future — among those, building victory gardens to ensure a stable food supply. At the time we were not just a nation of consumers, but a nation of doers. Now we rely on foreign and unknown sources for most of our food, energy, and goods. While the book takes a close look at the first in that list — food — it always keeps it in a wider context, continuing the discussion focused on the inter-relatedness of our current predicament. Industrial agriculture is seen as a key factor in our shift towards dependence. Therefore, food, the authors write, has the power to be a big part of the solution to so many of the issues we face.

Big Ag pushes a lot of myths in order to keep the system as is, as shareholders of the corporations dominating the food system expect them to. One of the myths Astyk and Newton focus on debunking is the “feeding the world” myth (in fact, they spend a whole chapter on it), which I’m sure you’ve heard before — that we need our highly efficient agriculture to feed hungry mouths. But in truth it has been proven near-universally that small-scale polyculture (diverse plants growing together) is higher yielding, protects soil and water resources better, produces fewer green house gasses, and creates more secure food systems. Of course industrial ag is always ready to point the finger and call anyone who asks for more farmers slave-drivers demanding laborious work with hand tools, but in fact, small-scale polyculture means less stressful work, more diverse work, and personal incentives — like feeding your family, and building your community — which large-scale agriculture has lost. They also discuss the inconvenient truths, like that what industrial agriculture is feeding us are cheap calories, that there is more than enough food to go around, it is just not properly distributed, and that rural communities, in Wendell Berry’s words, are suffering in a modern day form of colonialism. Astyk and Newton write:

…the very first project of colonialism, Edward Said observes, is to devalue everything the colonized person knows and believes, and to replace it with the culture of the colonizer, so that when you debase and humiliate and destroy the colonized person, rape the land and take its riches, they’ll believe you are doing it for their own good.

Could there be any better way to describe what has happened to millions of farmers in the last 100 years? They’ve been told they were hicks and rednecks, that their profound knowledge of their craft and their place was less valuable than professionalized knowledge coming out of agricultural colleges and cities… We told the children of farmers that what people in cities had was knowledge, and what they had was ignorance. Their forests were logged, their minerals mined, their soil stripped, their economies destroyed, families broken apart and towns converted into bedroom suburbs.

…we stripped farmers of what they had and what they knew, and left them willing to give over power to anyone who seemed to show them the respect they so deeply deserve.

Indeed, Astyk and Newton are not afraid of discussing the elephants in the room of industrial agriculture. On slavery, they write:

We have not so much abolished slavery as off-shored it. So one answer to the question of whether agrarianism is irretrievably bound up in slavery would be to say yes — but no more so than industrialism. Both are slave societies. In one, we see our slaves; in another we hide them so that we can feel righteous and not be confronted with their suffering.

and on the issue of population, which is often left out of the “feeding the world” conversation, the authors write:

If we can’t accept world-wide famine, and we can’t feed 9 billion people forever, without harming the oceans and running out of water, what options do we have? The only possible choice is managed population decline.

The best hope we can see is to try and stabilize population by using the best techniques available to us. What are these? They involve more education and power for women all over the world, access to basic medical care so that children survive infancy and women who want contraception can get it, and basic food security. And if you translate that, it comes down, generally speaking, to greater equity. That is, the things we need to do in order to stabilize the population problem are also the things we need to do for reasons of justice and for ecological stability.

So how are we going to inspire 100 million new farmers and 200 million new cooks? A Nation of Farmers is filled with ideas, like replanting the often-arable former farm land in the suburbs, and expanding the Community Supported Agriculture (CSA) model, all while giving practical suggestions on building the movement and homing the message. Included also are interviews with movement thinkers, and recipes, including a funny one for “city chicken” (pigeon) that includes strategies for catching them.

A Nation of Farmers is loaded with bold thinking. It is certainly a nuanced addition to the discussion on the current state of the food system, so much so that I would argue that this ambitious book even sometimes does too much. At times the uninitiated could get lost in all the new information, while those working on food security issues might find themselves flipping through explanatory pages. My copy is now sitting on the prime reference shelf on my desk, though, with numerous passages underlined, and I’m sure this won’t be the last time you read me making reference to it. So get yourself a copy, and get one for a friend, too, and join the food revolution.