What Do We Know? Fukuoka's One Straw Revolution, Re-released | Civil Eats

What Do We Know? Fukuoka’s One Straw Revolution, Re-released 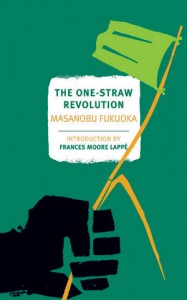 “Humanity knows nothing at all. There is no intrinsic value in anything, and every action is a futile, meaningless effort.” Bleak, maybe. But these are the sentiments behind a book as inspired as it is sad. As Masanobu Fukuoka explains in The One-Straw Revolution, after three years working too hard as a produce inspector for a government customs office (along with some bad luck in love), he began to suffer fainting spells, then pneumonia, hospitalization, depression, a vision—and ultimately shaken confidence in the ability of intellect to explain the world. Humbled, he moved back to his father’s farm, where he began to experiment with natural methods of farming, planting rice, grains, and citrus. First published in 1978, his account of these experiences became an inspiration for the alternative food movement and was re-released this year as part of the New York Review of Books Classics series. Diet for A Small Planet author Frances Moore Lappé comments in the new introduction on its continuing importance as a rejection of fear “that has fueled the drive for control over nature” and as a source of hope for those who would follow in Fukuoka’s footsteps.

One of the most appealing—but also irritating—aspects of One-Straw Revolution is the self-effacing voice of the author. Fukuoka shrugs off his accomplishments with the aw shucks charm of a Japanese sexagenarian. “All I did was dig holes,” he writes, explaining how he hand planted over twelve acres of mandarin orange orchards. In a way, he has a lot in common with Joel Salatin, the Christian-liberal-environmentalist-capitalist of Polyface Farm and Omnivore’s Dilemma fame. They’re both serious agricultural rebels. And like Salatin, Fukuoka has a spiritual connection to the land, acknowledging debts to Zen Buddhism and Taoism; still, he is clear to distance himself from any one system of belief—a pragmatist, he goes with what works.

Meticulously detailed though it is, One-Straw Revolution is much more than a how-to manual. It is far richer, with a whole way of thinking about the world, and it’s no coincidence that the prose reveals a poet’s ear for language and a sensitivity to the ecological relationships that bind people, culture, and place. “Daikon,” he writes, “has for its ancestor the plant called nazuna (shepherd’s purse), and this word nazuna is related to the word nagomu, which means to be softened. Daikon is the ‘herb that softens one’s disposition.” He cites Basho and Einstein, and he’s fond of zen paradox—to ask what nature is, you first have to ask “what that ‘what’ is, and what that human who inquires what that ‘what’ is is.” But what strikes you more than anything is Fukuoka’s intense appreciation of the natural beauty of his farm. When he wakes up one morning to find spiders covering his rice crops, he relishes their webs: “overnight the rice stubble and low-lying grasses had become completely covered with spider webs, as though with silk…In a quarter of an acre there must be how many thousands, how many millions!” As insect-control, the spiders are necessary for the farm, but they inspire awe and an exclamation point.He runs his farm on a set of basic principles that boil down to no weeding, no tilling, and no chemical fertilizers or pesticides. This is his “do-nothing” technique. It doesn’t mean no work, but essentially it’s radically passive farming. You don’t use compost, you just cover your crops with straw and grow clover. When you’re spreading straw, you don’t spread it neatly, you toss it “every which way.” You don’t prune trees, you let them grow wild. You don’t wax the skin of your fruit, you sell it as is, a little imperfect. Instead of trying to control nature, Fukuoka tries to work with it, learning as he goes, and he is remarkably successful.

If Fukuoka finds the rhythms of farming almost by accident, there isn’t much accidental about his politics. His “do-nothing” philosophy poses a direct challenge to modern agribusiness. Toughened by disappointment, he argues with clarity and humility against a purely market-driven food system, and over the course of the book, he describes the effects of that system on Japan’s environment, whether mercury poisoning in tuna or the agricultural runoff making its way into local rivers and lakes (oh, and the government built a highway through the middle of his farm). Finally, he takes issue with the idea that “if you can sell it, it’s fine”, by confronting the reader with the reality that consumer demand plays a crucial role in fueling unsustainable markets. How important is it to be able to eat greenhouse-raised eggplants during the winter when they’re out of season? As with anything, there’s a choice, and because of what he calls the “extravagance of human desire” there are no limits to the potential for harm.

Writing during the 1970s, Fukuoka is bemused by the young people who travel to his farm, many having rejected these desires. Who are they? What do they expect from him? After all, he’s only a farmer, an old man. But as the author reflects on the rise of hippie culture and on the young searchers making sojourns to India, living on a kibbutz in Israel, or working together in the desert in the West, he sees progress, not counterculture. “In my opinion,” he writes, “if 100% of the people were farmers it would be ideal. I think this is the most direct path toward making this country a happy, pleasant land.”

And why not? Taking the author at his word, we might do well to do less, do “nothing,” even, try farming and philosophy. There’s always the roof.