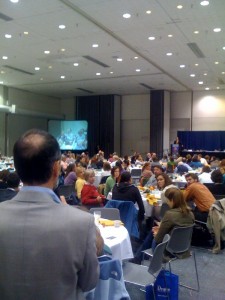 Agriculture Secretary Tom Vilsack was getting lots of appreciative applause and head nods from the packed hall at the Community Food Security Coalition conference yesterday, held in Des Moines, Iowa. He described the USDA’s plans to improve school nutrition, support local food systems, and work with the Justice Department to review the impact of corporate agribusiness on small farmers. But then, with time for only one more question, I was handed the microphone.

“Mr. Secretary, may I ask a tough question on GMOs?”

The American Academy of Environmental Medicine this year said that genetically modified foods, according to animal studies, are causally linked to accelerated aging, dysfunctional immune regulation, organ damage, gastrointestinal distress, and immune system damage. A study came out by the Union of Concerned Scientists confirming what we all know, that genetically modified crops, on average, reduce yield. A USDA report from 2006 showed that farmers don’t actually increase income from GMOs, but many actually lose income. And for the last several years, the United States has been forced to spend $3-$5 billion per year to prop up the prices of the GM crops no one wants.

When you were appointed Secretary of Agriculture, many of our mutual friends–I live in Iowa and was proud to have you as our governor–assured me that you have an open mind and are very reasonable and forward thinking. And so I was very excited that you had taken this position as Secretary of Agriculture. And I’m wondering, have you ever heard this information? Where do you get your information about GMOs? And are you willing to take a delegation in D.C. to give you this hard evidence about how GMOs have actually failed us, that they’ve been put onto the market long before the science is ready, and it’s time to put it back into the laboratory until they’ve done their homework.

The room erupted into the loudest applause of the morning.

Secretary Vilsack knew at once what kind of crowd he was dealing with. Or so I thought.

He said he was willing to visit with folks, to read studies, to learn as much as he possible can. He pointed out that there are lots of studies, not necessarily consistent, even conflicting. He said he was in the process of working on a set of regulations and had brought proponents and opponents together to search for common ground. And he was looking to create a regulatory system with sufficient assurances and protections.

At this point in his answer, Secretary Vilsack, who has a history of favoring GMOs–and even appears to be more pro-GMO than his Bush administration predecessors–was trying to sound even handed. Then he made a tragic mistake.

After a slight pause, he added in a warm tone, “I will tell you that the world is very concerned about the ever-increasing population of the globe and the capacity to be able to feed all of those people.”

Moans, groans, hisses, even boos. Not rowdy, mind you. But clearly agitated.

You see, the people in the room were among the top experts at ACTUALLY feeding the world. They included numerous PhDs who had spent their careers looking deeply into the issue. Among those present were several of the authors of the authoritative IAASTD report. The International Assessment of Agricultural Knowledge, Science and Technology for Development, is the most comprehensive evaluation of world agriculture ever. It was a three-year collaborative effort with 900 participants and 110 countries, and was co-sponsored by all the majors, e.g. the World Bank, FAO, UNESCO, WHO. The behemoth effort evaluated the last 50 years of agriculture, and prescribed the methods that were now needed to meet the development and sustainability goals of reducing hunger and poverty, improving nutrition, health and rural livelihoods, and facilitating social and environmental sustainability.

And GMOs was not one of those needed methods! It was clear to the experts that the current generation of GMOs did not live up to the hype continuously broadcast by biotech companies and their promotional East Coast wing — the federal government.

In fact, the night before Vilsack addressed the conference, the same audience heard a keynote by Hans Herren, the co-chairman of the IAASTD report, during which he reiterated that biotechnology was not up to the task. And this morning, Hans Herren was in the room when Vilsack tried to play the feed-the-world card. Bad move.

Thus, he distanced himself from the contentious, and fallacious, argument. He was just reporting what others had told him.

And that may in fact be his problem with understanding the serious health and environmental dangers of GMOs in general, if he is simply, as he says, repeating what others–Monsanto, Syngenta, DuPont–have told him over and over again.

It’s true that I have mutual friends of Tom Vilsack who like and respect him and believe him to be reasonable and thoughtful. I have seen this myself, but not on the GMO issue.

Perhaps the reaction of the experts this morning will help to jar him out of his GMOs-feed-the-world mindset. Unfortunately, he is now deeply immersed in the second of this week’s food conferences here in Des Moines, the World Food Prize. It features the major GMO promoters from around the world, including Bill Gates (who gives tens of millions to GMO development in Africa), and top executives of DuPont and Syngenta. Expect to hear constant chatter about how GMOs are the solution to world hunger which, unfortunately, may undue any of the restructuring that this mornings run in with reality may have awakened.

In the meantime, if there are Q & A sessions at meetings where Secretary Vilsack is speaking or attending, I’ll do my best to get to a mic.

International bestselling author and filmmaker Jeffrey M. Smith is the executive director of the Institute for Responsible Technology. His first book, Seeds of Deception: Exposing Industry and Government Lies About the Safety of the Genetically Engineered Foods You're Eating, is the world's bestselling and #1 rated book on GMOs. His second, Genetic Roulette: The Documented Health Risks of Genetically Engineered Foods, documents 65 health risks of the GM foods Americans eat everyday. Both are distributed by Chelsea Green Publishing. Read more >