Hugh Fearnley-Whittingstall and the Agricultural Benefits of British Television 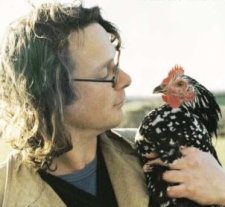 Now, you might expect that with a title like that, this article would be written by some kind of apologist for the entertainment industry. On the contrary, I hate to watch television. Typically, I would rather be doing almost anything. Preparing my taxes, sitting in traffic, having teeth pulled, you name it, and I’d take it over passively sponging up the content-deficient, advertisement-laden drivel that constitutes the bulk of what’s on American TV. I know I’m not alone in my cynical feelings toward this most revered institution. We hear quite often about the “dangers of too much television,” for children, and for adults, and these fears are not unfounded. There is a growing mountain of evidence to substantiate the dangerous effects. But it’s a frustrating reality, because television, like any other tool, can and should have its good uses.

A couple of years ago, a good friend of mine began telling me about the “River Cottage” series’ of shows that was airing on British cable television. (“Escape to River Cottage”, “Return to River Cottage”, “River Cottage Forever”, “Beyond River Cottage”). I was mildly curious, but as you might imagine, I didn’t exactly run for the TV. As it happened, I was loaned copies of each series on DVD. Despite my skepticism, it didn’t take long and I was hooked. As something of an aspiring homesteader, albeit a very inexperienced one, this was television I could use.

The shows focus on the downsizing experiment of erstwhile London chef and food writer Hugh Fearnley-Whittingstall. Having moved from the metropolis to rural West Dorset, an area where good farming traditions are preserved and largely still practiced, Hugh begins an all-encompassing attempt at learning the rural life in earnest. From learning to grow (and show) vegetables, to the practicalities of keeping livestock, and some rather wild hunting and foraging forays, Hugh shies away from no adventure that has to do with procuring food. In the process, he enlists help from knowledgeable locals and engages the community in some very amusing ways, taking part in everything from a pancake race to Morris dancing and a raw nettle eating contest. But the show doesn’t end there. Once Hugh has procured the finest local, seasonal ingredients he brings it all into the kitchen and demonstrates an extraordinary breadth of knowledge in the recipes he prepares.

Fearnley-Whittingstall is passionate about good food, and his passion extends beyond the kitchen. By taking in the entire food process, from field to table, the River Cottage series’ attempt to re-connect food and cooking to the community and the natural world of which they are such an important part. This is something that is not accounted for on the American “Food Network”, where everything comes from the supermarket, and the closest you might get to any consideration of agriculture is the mention of “organic” produce. You would never see anyone on American television talking about slaughtering their own pigs, stuffing a goose neck, preparing black pudding, or cooking with local, wild foods.

But even in Europe, Fearnley-Whittingstall has drawn some criticism for his carnivorous ways. Indeed, he is certainly not a vegetarian. He hunts, fishes, and raises his own meat animals for slaughter, but he is committed to raising his animals humanely and to using absolutely every part of the animals he’s killed. His sense of culinary adventure with regard to meat matches his try-anything-once style. While this fear-no-offal style of cooking won’t appeal to everyone, it certainly ensures that Fearnley-Whittingstall’s meat rations are used to the fullest possible extent. And in the process he gives a fresh voice to traditional food preparation methods like sausage making and the dry curing of hams, to name just two time-honored practices. This dialogue about humane use of meat animals is one that Fearnley-Whittingstall welcomes, because, at the very least, it raises awareness about the issue of ethical husbandry and use of animals.

But this isn’t the only conversation that his efforts have aroused. Fearnley-Whittingstall has also been accused of painting the rural life a little too idyllic, and to be fair, this criticism isn’t entirely baseless. In the shows you never see Hugh digging holes for fence posts, or weeding, or not having the money to undertake a pet project. You never hear mention of whether or not the local participants are paid for appearing, but my guess is that they are. It’s obvious that he has the financial backing of a television network, even if you have to read between the lines to see it.

Fearnley-Whittingstall himself partially concedes the point in a quote on his website, even as he justifies the authenticity of the shows:

…at the very least we’ve tried to show rural life in a more open and honest way than some other programs, and in particular we’ve tried to show people where food actually comes from. That it’s either grown or it comes from animals; that it doesn’t begin in the supermarket in a plastic package. I guess we’re probably a little bit guilty of making things slightly rosy tinted – it’s difficult because I’m not financially dependent on farming and it would be hypocritical to pretend that I am. (Hugh makes his living, which is probably a pretty lucrative one, from selling books and creating television series’) For me, the exploration of River Cottage was about discovering a new way of life. That has certainly been very real for me and I think people round here can see that. When I began the series I still lived half in London but now I live completely in Dorset, so from that point of view what you see in the series is what’s happened in my life.

Indeed, Fearnley-Whittingstall now has his own 40 acre farm that he tends with his family and some hired help. Aside from this, he has also founded River Cottage HQ. A commercial category all to itself, this thriving, adventurous enterprise is a fully fledged rural cooking school, a working organic farm, a restaurant for specialty banquets, a set for filming television shows, and the manufacturing center for a number of River Cottage food products. Talk about agricultural diversification.

Offering courses on everything from a “Pig in a Day” butchering lesson, to “Catch and Cook” fishing workshops, and a “Build and Bake” course where participants dig clay, make a pizza oven, and then make pizzas, River Cottage HQ is re-engaging people in food issues at a basic level. It is giving them knowledge and confidence to produce and prepare food for themselves, which, sadly, is becoming a rather uncommon undertaking. It’s an exciting model that we in the states would do well to notice. And all of this has grown out of Fearnley-Whittingstall’s experiment with rural living and the interest aroused by the television shows.

Sure the shows may be a bit contrived, but what television program isn’t? Even the most ardent “reality TV” fan realizes that the outcomes of what will happen in the program are largely a known factor beforehand. River Cottage is no exception, but at least its creator has in mind a worthwhile pursuit, namely, enlarging people’s understanding about where food comes from and the possibilities for good food practices. If it takes a clever script to get people interested in the rural life and food issues, and get them up off the couch, then so be it. It sure beats another episode of American Idol.

The test for me was my three-year-old daughter. She loves the show and often asks to watch it. When she recently began gathering leaves from the woods in a basket, telling me that she was bringing them home to cook with, I smiled to myself. A lot of kids would be imitating something off of the Disney Channel or Harry Potter, but here she was foraging for food in imitation of Fearnley-Whittingstall. In terms of stimulating a child’s imagination about food and the world around them, it seems to me that a person could do a lot worse. How many other three-year-olds do you know that you can cook with nettles?

Collin Taylor lives in northern Kentucky with his wife and two young children. He makes his living as a librarian. He also pursues interests in studio pottery, farming, and writing. His writing has also appeared in Clay Times and Friends Journal. Read more >