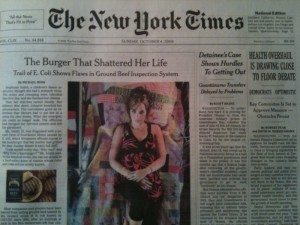 Last Sunday, investigative reporter for the New York Times Michael Moss took a hard look at a hamburger contaminated with e. coli, following the elaborate path it took from multiple cows and slaughterhouses and through various processes to one of the victim’s plates, a 22-year old dance instructor, now paralyzed, named Stephanie Smith. The piece was a shocker because it showed just how unaccountable these companies have become in the face of an often powerless and conflicted USDA. The piece is still on the most-emailed list of the NYT website as of this writing, it pushed Tyson into a deal with Costco over testing, and it is even being discussed in Washington, according to a follow-up piece featured today by Moss.

Secretary of Agriculture Tom Vilsack responded to the article right away, adding later that the Obama administration was going to ask congress for legislation that would allow the USDA to conduct mandatory recalls — a crucial first step in making sure fewer people fall ill after eating contaminated meat.

Representative Rosa DeLauro (D-CT), chairwoman of the Agriculture Subcommittee of the House Appropriations Committee sent a letter to Secretary Vilsack, and spoke on the record for Moss, agreeing that indeed the USDA did face a conflict of interest. She was quoted as saying:

“The U.S.D.A. is supposed to be protecting public health and at the same time be promoting agricultural products, and my view is that those two things don’t mix.”

Representative Louise Slaughter (D-NY), chairwoman of the Rules Committee, read parts of Sunday’s article on the floor of the House on Wednesday, and spoke about how these pathogens in our meat and antibiotics were effecting our ability to export our meat to Europe. She is the author of a bill called the Preservation of Antibiotics for Medical Treatment Act (which we wrote about here), that seeks to limit the non-therapeutic use of antibiotics in animal agriculture, something that has successfully been done in Europe. We give 70% of our antibiotics to animals in this country in order to keep them in close confinement. (We have written about antibiotics and confinement operations in various ways here at Civil Eats: possible links to swine flu, the work ahead for Obama’s Food Safety Working Group, on how we treat the animals we eat, and the case for regulating confined animal feeding operations (CAFOs).)

The success of this article shows that the public is eager to be more informed on these issues, and that Washington and corporations act differently when held accountable. Congratulations to Michael Moss for the successful story, and to the New York Times for taking on reporting on our broken food system.