Women in Agriculture: A Farmer’s Perspective 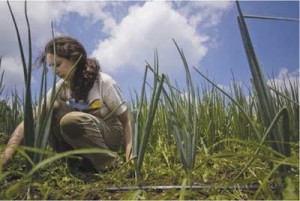 It feels kind of like the elephant in the room. It’s not that we don’t talk or think about it around here — indeed, we do both, rather frequently. But rarely do we discuss it with others. For some reason, it’s not the kind of subject that is discussed all that openly. Instead, it’s alluded to subtly, in a manner that just confuses me at first, until I remember that this is a little unusual.

“You don’t look like a farmer,” people say when I tell them my profession.

“What do you mean?” I reply, never able to let an issue go,

It still takes me a minute to put it together. (Why do you have to be “big” to ride a tractor? Why do you have to ride a tractor all the time to be a farmer? What does it mean to not “look” like someone who does ride a tractor?) Until I realize, oh, they mean because I am a young woman. At this point, I never know quite what to say. “I ride a tractor sometimes,” or, “Yep, well, I am.” The subject changes. But I am constantly reminded that to be a female farmer is something a little out-of-the-ordinary, to work at a farm site staffed almost entirely by women, even more so. So I decided to express my thoughts about some of the intricacies of women in agriculture.

Lately, I hear a lot about female farmers as a “new trend.” According to the 2007 census, one or two out of ten farms is now operated by a woman. However, the “trend” part is hard to track, and seems to me to obscure some history of women who have always been involved in farming. Female farmers have been historically under-reported and under-recognized. The U.S. census records only one operator per farm, the deed holder. As the majority of land is officially owned by men, this renders invisible all female partners who manage farms with their husbands or families. As I learned from this episode of the radio series Making Contact, worldwide, between 65 and 75 percent of all food is grown by women, who own only one percent of the world’s land. Mainly operating as subsistence growers, this food production is often conceptualized as “domestic work,” obscuring recognition of these female farmers worldwide. Still, the visibility of female farmers, at least within the U.S., is growing. For all its limitations, the census has recorded a more than doubling of farms operated by women between 1978 and 2005, from 100,000 to 250,000.

As the country’s farmers age, a new “back to the land” movement, fueled partly by desires to put personal politics into action and an increasing disillusionment with the job market and traditional concept of careerism for young people, is encouraging a new crop of farmers, many of them women. We new farmers often farm under nontraditional arrangements — co-farmers are often platonic managing partners instead of the heterosexual husband-wife team of the past — meaning women are more often recognized as farm owners or principle managers.

Additionally, as farmers age, their land is more often being taken over by wives, daughters, or other female family members. Interestingly, as making a living as a farmer becomes ever more difficult, it becomes women’s work. At a farmer’s market I frequent, one of the farms is a hundred-acre conventional New Jersey farm that sells corn, tomatoes, squash, and tree fruit. The farm is run by two middle-aged sisters who recently took over management of the farm from their 80-year-old father. I was excited to see a farm run by women of a slightly older generation, so I asked them their thoughts. “Most of the time, other farmers treat us okay,” they told me, “although if we do something wrong, it’s, ‘oh those girls.’ We bring along [our brother] to market sometimes; he doesn’t know a thing about farming, but people just want to talk to ‘the man in charge.'” They took over the farm, they told me, because their husbands and brothers had to get “better” jobs that brought in more money. Without the expectation of being primary breadwinners, they were left as the ones who could keep the family farm alive.

In both conversation and personal thought about females and farming, I want to be careful to avoid gender essentialism. I do not want to make generalizations like, “women make good farmers because they like to nurture the earth,” or, “men are better with machines.” Gender expression, I believe, is a complex combination of socialization, culture, and genetics. Not being able to divorce these things from each other, I find it frustrating and counterproductive to base ideas or logic on what men or women are “naturally” like or good at doing.

That said, I acknowledge my shortcomings, like a lack of confidence with machines and power tools. Part of this is completely personal, gender aside; I happen to not be good with power tools, whereas I know many women who are. However, there is a gendered aspect to power-tool-confidence. My sister recently visited me in Philadelphia, and came to work with me on the farm. When I asked her what she wanted to work on, she replied, “anything with power tools,” explaining that she recently volunteered recycling old doors for a green-deconstruction non-profit with a male friend of hers.

When the staff person trained them, he offered a power drill to help, but spoke about it and handed it only to my sister’s male friend. Finally, the friend asked my sister if she, too, would like to use the power drill. My sister did, and had a great time.

My insecurity with machines and tools has several layers. I am not good at them, I suspect, because I was never encouraged to use them, so I never gained comfort or ability through practice. Now, I am afraid to practice because I am not good, and I do not want other people to notice and use their observations of my fumbling to further whatever ingrained ideas they have of women being bad with power tools. It gets rather angsty. I do not want to speak for all female-bodied farmers, but I think many of us feel like we have something to prove. I have to remind myself sometimes that just because I can’t shovel compost as fast or carry a wheelbarrow quite as full of watermelons, doesn’t mean that I am not strong or not a good farmer. We work together. And anyway, we all can handle wheelbarrows that are pretty darn full.

We never intentionally created a female dominated farm here at Henry Got Crops. Most of our applicants for internships and apprentices just happened to be female, and most of those qualified ended up being women. We have three female apprentices, two female interns, and one male intern. (We now have another — a big welcome to Ed, who is newly working with us this fall!) I am glad, though, to be able to offer a positive view of women as strong, hard, workers to the students here at Saul; I want the female students to know that they can be farmers if they want, or anything else they aspire toward. One of our Saul summer interns brought her boyfriend out to work with her one morning. “How did he like it?” I asked her the next day. “I brought him out so he would see how hard I work,” she replied. “He said it was fun, but really hard. He said he couldn’t do this every day.”

I have to admit, I was pretty proud.

Originally published on Beyond Green, h/t to Tom Laskawy

Nicole Sugerman farms at the "Henry Got Crops" CSA, a joint project of the Weavers Way Co-op Farm and Philadelphia's W. B. Saul High School of Agricultural Sciences and one of the first high school-based CSAs in the country. The article originally appeared in the Weavers Way Shuttle. Read more >