Michelle Obama and the Launch of the White House Farmers Market 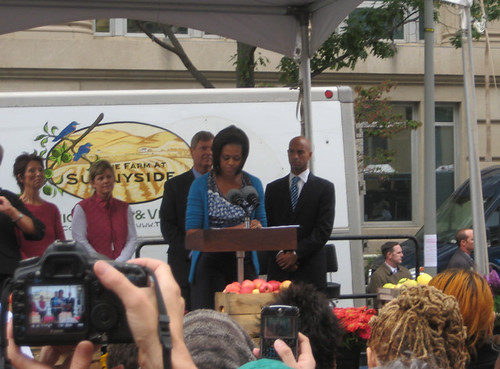 The White House likes healthy, fresh, local food — that was the message of First Lady Michelle Obama at the opening of the farmers market around the corner from the White House on Thursday. “I have never seen so many people excited about fruits and vegetables,” she began. “That’s a very good thing.”

She linked the market to the garden on the White House lawn. “When we decided to plant the White House garden, we thought it would be a way to educate kids about eating more healthy. But the garden has turned out into so much more than we could have expected,” she said. “This has been one of the greatest things I’ve done in my life so far.”

She also tied it to the health debate now underway. “I realized that little things like the garden can actually play a role in all of these larger discussions,” she said.

It was a celebratory occasion, punctuated by screams and yelps from the crowd. And then after her remarks, the shopping began as the First Lady strolled over to the Farm at Sunnyside and bought some organic vegetables from my friend Emily Cook, who I knew as a farm intern years ago. 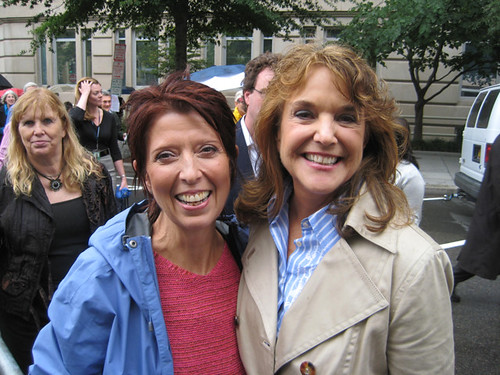 But the main attraction was the First Lady. Clearly, the White House is interested in this issue. Clearly, they are trying to do something about it. And hopefully, it will move past symbolism and the snarky criticism of columnists who miss the forest for the kale and retread the same old tired ground. A far more subtle and intelligent reading of this entire event — and an analysis of the First Lady’s message — can be found in this post by Eddie Gehman Kohan of ObamaFoodarama.

Grass roots activism started this local foods movement, dramatically expanding farmers’ markets around the country, but celebrities and policy makers will push things to the next level.

Among them — Bernadine Prince and Ann Yonkers, who launched the first FreshFarm Markets 12 years ago in DC and made this White House market happen. Farmers markets have come a long way since then and I expect they have a ways to go.

Here’s a video of the First Lady’s speech:

Samuel Fromartz is a Washington, D.C.-based writer and author of Organic Inc: Natural Foods and How They Grew. The book includes a description of the birth of FreshFarm markets in Washington and the earliest organic farmers who sold in the city in the 1970s. He blogs at ChewsWise.com. Read more >