A Morgenthau Favorite: The Tart and Tender McIntosh | Civil Eats

A Morgenthau Favorite: The Tart and Tender McIntosh 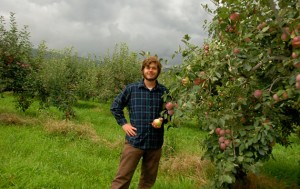 In most respects, Fishkill Farms operates like any of the dozens of sustainable family farms that dot New York’s Hudson River Valley. Each morning, a team of workers heads out into the field to plant and prune back weeds, or tend to the farm’s 50 acres of fruit trees. Nearby, chickens busily peck at the grass around their mobile coop, enriching the soil as they go, and laying eggs with yolks like ripe tangerines. Unlike its neighbors, however, Fishkill Farms has an unusual Jewish history — one that, it turns out, is remarkably well suited for the Rosh Hashanah table.

Nearly a century ago, in 1913, 22-year-old Henry Morgenthau Jr. acquired a 1,000-acre apple orchard and dairy farm. Farming was an unusual choice of profession for the only son of a wealthy Jewish businessman and ambassador raised in New York City. But despite his father’s expectation that he join the family real estate company, Morgenthau decided to leave his architectural studies at Cornell University (he would later return to study agriculture) and follow a calling to work the land. Over the next decade and a half, he grew more than 10 different varieties of apples at Fishkill Farms, favoring the tart and tender-fleshed McIntosh above all. He and his wife, Elinor, toiled diligently — organizing canning clubs for the township’s women and even shortening their honeymoon so that they could make it home for spring planting. In 1922, Morgenthau purchased American Agriculturist magazine and split his time among the publication’s offices in New York City, his farm and the printing plant upstate in nearby Poughkeepsie. 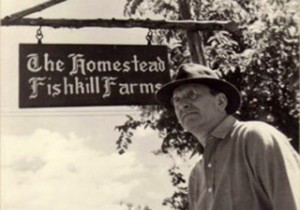 Morgenthau would, of course, eventually return to the public sphere — as chairman of the Federal Farm Board and then as the U.S. secretary of the Treasury under his good friend, Franklin Delano Roosevelt. But according to a family history written by Henry Morgenthau III, “Mostly Morgenthaus” (Ticknor & Fields, 1991), his father always identified himself as a farmer above all. And without a doubt, his greatest passion was apples: “He loved nothing better than to ride horseback through the rows of apple trees at all seasons.”

Despite his Bavarian-Jewish heritage, Henry Morgenthau was not a religious man. He would play a key role in the American government’s effort to rescue European Jews during and after World War II, and later worked extensively with Jewish philanthropies and Israeli causes.

Still, his son, Manhattan District Attorney Robert Morgenthau, says that his father never made the explicit connection between his beloved orchards and the Jewish New Year. “My father believed that what you did for people is more important than what you pray,” he said. Regardless, his father certainly understood — perhaps better than most people — how an apple embodies the spirit of autumn and the sense of seasonal flux, which helps give Rosh Hashanah its emotional power.

At the time, Morgenthau’s path away from the Ivy League and toward the farm was certainly regarded as curious, and possibly irresponsible, by wider society. In retrospect, however, he stands as an inspiring predecessor for today’s growing movement of college-educated 20- and 30-somethings who eschew office-based professions in order to grow food — like his grandson, Josh.

Two years ago, Josh Morgenthau — a 25-year old painter and Yale graduate — came to Fishkill Farms to be its full-time manager. Here’s how it happened: Josh’s father, Robert Morgenthau, shares his father’s deep love of Fishkill Farms and, like his father once did, spends nearly every weekend there. Still, he never farmed professionally, so when the farm’s long-term caretaker retired a decade ago, the orchard fell into disrepair. Luckily, Josh, who has fond childhood memories of “making and bottling cider” with his dad, was intrigued by the unique opportunity to paint agricultural landscapes, and agreed to step in and take over the “family business.”

With the help of his girlfriend, Hannah Geller, and a small team of dedicated young farmers, Josh Morgenthau has begun to revitalize Fishkill Farms. Focusing on sustainable growing practices, they cultivate more than 15 different types of apples, including his grandfather’s favorite, McIntosh, and a few heirloom varieties. They also grow pears, cherries, peaches and several other types of fruit; keep a flock of laying chickens, and recently planted a five-acre organic vegetable farm. Fishkill Farms’ produce makes its way to customers via farmers’ markets in Brooklyn and upstate in Beacon, and through the farm’s on-site stand and U-pick operations. Josh Morgenthau said that farm traffic increases dramatically in September and October when the apple harvest — and, not coincidentally, the High Holy Days — are in full swing. “It is such a blur,” he said. “All of a sudden, thousands of people begin cycling through.”

Just two years into his farming career, he represents the next generation in a family deeply committed to both public service and stewardship of the land. Whether he ultimately decides to make farming his life’s work or a stop along the path remains to be seen — but that is ultimately beside the point. “There is something incredibly fulfilling about the work of coaxing food from the earth,” Morgenthau said. “I don’t know if I would call it spiritual, but the connection with forces outside of your control definitely feels very humbling.” Somewhere, a proud grandfather is smiling.

Reprinted with permission of the Forward