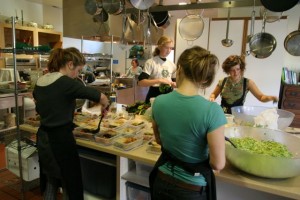 A true beacon of creating community through food, the Ceres Community Project in Sebastopol, California, brings teens into the kitchen to learn about healthy foods and cooking skills while providing organic meals to individuals and families battling cancer and other serious illnesses. Named for the Roman goddess, Ceres—who rules the growing and preparing of food as well as the natural cycles of birth, death, and renewal—the nonprofit’s 100-plus volunteers currently cook meals for more than 40 families a week and, since launching in 2007, have provided nearly 45,000 meals to Sonoma County families.

According to Ceres, cancer now affects one in three people before the age of 75 and one in four will die from complications caused by the disease. More than 50 percent of all deaths in the U.S.—from heart disease, cancer and diabetes—are directly related to the combination of poor nutrition, obesity and inactivity. An estimated one-third of the 565,000 cancer deaths annually—or 188,000—are believed to be directly related to these dietary and lifestyle choices.

Ceres seeks to build bridges by nourishing those who are ill with wholesome food while empowering young people, creating community ties, and strengthening the local food economy. Cathryn Couch, founder and Executive Director, who started the project with one volunteer and three families and quickly saw the tremendous potential for making a difference through food. “I saw how elegant it could be to bring together needs in the community through wholeness and integrity,” said Couch. “Not only do the kids gain culinary and nutrition skills, but they also learn about their capacity to contribute to the world around them.” Couch noted that many teen volunteers stay for years and some have returned later to help run the kitchen.

Several times a week, about a half a dozen students gather in the community kitchen with two to three adult mentors. Couch makes it clear that the kids—who range in age from 13-18 years old—are the chefs, not the prep cooks; they are in charge of the recipes and managing time flow, while learning how to cook. Once a week, the kids’ creations—four to five nutrient-dense and mostly organic meals—are delivered to clients in need.

Due to the remarkable support of local businesses—which donate all of the organic produce and half of the seafood—and from generous donations from other organizations, Ceres is able to offer its services for three months completely free of charge. At the end of that period, clients may request an additional six months of service on a sliding scale donation basis. Word of mouth and an outpouring of community interest has helped the project blossom from serving 4,500 meals in 2007 to 17,300 meals in 2008 to 23,000 meals in 2009.

The link between diet and health is now undeniable, and many studies have shown that how cancer patients eat during treatment can both reduce side effects and increase treatment effectiveness. An alter in the kitchen holding the clients’ “love letters” reminds the kids that their hard work makes a huge difference. Many of Ceres’ clients get better, some do not. ”It’s a profound opportunity for young people to learn about life cycles,” said Couch. “I deeply believe that as we shift our attitudes toward food, there will be an entire shift for the better for our society and for the planet.”

By instilling lifelong healthy food habits in young people and helping people with cancer and other illnesses learn about the healing power of food, Ceres is trying to make that shift one lovingly cooked meal at a time.

To help Ceres’ clients to continue their healing, and to support its mission, the project has a new book, available on their web site, out this November, Nourishing Connections: The Healing Power of Food and Community which will contain 100 recipes, a research section, and original art from Ceres’ clients. In addition, local folks have the opportunity to celebrate Ceres at a fundraiser at Lynmar Winery on September 19.