Evaluating the Legacy of the Father of the Green Revolution 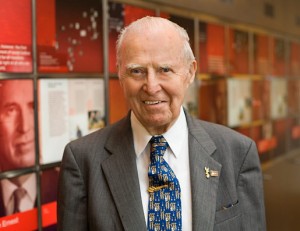 Norman Borlaug — best known for winning the Nobel Prize in 1970 for his role in the Green Revolution (the transformation of agriculture to an industrial, monocropped system, which increased the amount of food being produced in Mexico, India, Pakistan, the Philippines and elsewhere) — died this past weekend at age 95.

Borlaug’s life was dedicated to ending hunger through technology, and increasing yields was his single-minded aim. Though I do not doubt his sincerity in seeking to prevent famine, what he failed to recognize was that hunger did not persist because of a lack of food. That in fact, the root of hunger issues in the world have had more to do with a lack of equal food distribution. (As the BBC recently reported, elimination of food waste alone in the UK and the US could lift 1 billion people out of hunger if that food were instead better distributed.) Technology brings with it both bad and good; and in fact, climate change could be the worst end result of our dalliance with it. But in believing that somehow technology will only perfect us, we’ve stayed in denial about the potential for technology to also destroy us, whether quick (think atomic bomb) or more subtle — through the destruction over time of our soil.

Indeed, yields did increase early on through the Green Revolution’s efficiencies and the introduction of irrigation and imported nitrogen to the soil. These short-term gains were intoxicating. But in the long term, yields have leveled off and crops have fallen prey to nature’s barriers: superweeds, lowering water tables, availability of oil for transport, climate change, etc.

The truth is, we now know that the Green Revolution, like our own American industrial agriculture system, is unsustainable: it is entirely dependent on oil, reliant on excessive amounts of water, and requires the products of a handful of corporations. Sustainable agriculture is the only way forward that deals with these issues, and a ‘Sustainable Green Revolution’ will necessarily involve putting away silver bullet thinking and instead empowering smallholders in whatever ways work best for their particular region.

While the Obama administration considers forging another Green Revolution, this time in Africa — where USAID has been funding agricultural biotechnology since 1991 — I felt that it might be valuable to review some of the legacies of the Green Revolution point by point.

The Green Revolution has:

The Green Revolution is not a long-term solution to the problem of hunger. The elephant in the room, of course, is population. Borlaug saw that we could not continue to feed a growing population — whether he recognized it as a resource availability issue or not.

The book, A Nation of Farmers by Aaron Newton and Sharon Astyk had this to say about the Green Revolution:

There is, in truth, no way to be certain what we gained and what we lost in the Green Revolution. What is virtually certain is that its gains were overstated and that allocation of resources, whether from future generations or from poor to rich, were inequitable. When someone makes the statement that grain yields rose by so much, it looks impressive. But the practical realities of that are very different. We have to ask whether those yield increases actually made it from fields into the mouths of the hungry and whether it was possible to duplicate them through any other method.

The bottom line is that we often think of our wealth as a product of our ingenuity, education and technology, when it is more specifically the result of the exploitation of other countries labor and resources. Borlaug’s Green Revolution neglected these social aspects of the need to feed the hungry. The question is, will we ever re-evaluate the underlying principles we espouse for accruing wealth in order to create a truly equitable and just world? If not, we will never solve the problems those principles create.