The Food of a Younger Land Urges Eaters Forward 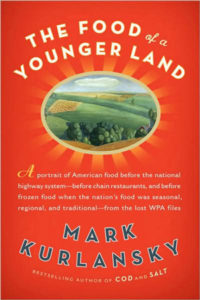 There has been a lot of talk lately about what will do us in. For the moment, at least, it is all a foregone conclusion: America is on an inevitable decent toward complete destruction or (if we are lucky) total irrelevance. Batten down the hatches and learn Chinese because we won’t be around to see the next World Cup.

It is probably all ridiculous, of course, and certainly premature, but who who can completely shun this sublime game? To draw a picture of the world we know with its boundaries reassigned is so humorous that we pay attention to lunatics like Igor Panarin, the Russian professor whose map of America has become an internet staple. (If you haven’t seen it, now is the time – it is inexplicably fun.)

If our recent troubles have made a parlor game out of predicting the end, so to do they explain our nostalgia for the America that no longer exists. “The charm of history,” Aldous Huxley said, “is that nothing changes and yet everything is completely different.” Never did we seem more different than in the decade following the Great Depression, when the Mason-Dixon line was still a political boundary, the land abounded with farms and Franklin Delano Roosevelt, for a few short years, brought us closer to socialism that this country had ever been (and almost certainly will ever be.)

This is the backdrop of The Food of a Younger Land, a collection of writing edited by the popular historian Mark Kurlansky. Despite what the publisher would like us to believe, it is not really Kurlansky’s book, though his italicized writing is sprinkled throughout. It is a product of the Federal Writers’ Project, a program so foreign to our current United States that its name alone seems fantastical.

As part of the Works Progress Administration, out of work authors were paid a reasonable sum for their labor. America Eats was one of the projects, and it involved hiring writers to travel the country and document regional eating habits, many of which were already in danger of extinction with the onset of industrialized food production and rapid abandonment of farms. The whole thing was shelved after the bombing of Pearl Harbor and remained locked away until now. Kurlansky has selected his favorite pieces and presented them, unedited, in this peculiar and occasionally fascinating collection (though he is not the first to do so).

How the project was laid out is an interesting story and well documented in the introduction; and by the end of the book, the fact that the project existed at all remains the most remarkable aspect. (You are unlikely to read the book from start to finish, however, since much of the thrill is finding at random, for instance, a funny little piece by Don Dolan called “A Los Angeles Sandwich Called a Taco” or the page-length poem “Nebraskans Eat the Weiners” — We believe that if Napoleon/In retreating from the cold/Could have had Nebraska hot dogs/He would have made it to the fold.)

Weiners? Tacos? Not exactly catnip for a modern-day foodie, of course. But this is what Kurlanksy found in the files, and we should probably assume that he chose pieces which conformed most closely the book’s long subtitle: A portrait of American food – before the national highway system, before chain restaurants, and before frozen food, when the nation’s food was seasonal, regional, and traditional…

This turns out to be more a summation of what most who buy the book will be looking for than an accurate representation of what lies inside. Sure, there are long-forgotten regionalisms — Montana beaver tails, Kentucky opossum and Indiana persimmon pudding (like too many entries, only a recipe buttered by Kurlansky’s substantial forward.) Maple syrup is tapped in the spring, gamey meats are cooked and green vegetables disappear for the winter.

But then there are few vegetables at all, and almost no seasoning save for salt. Boredom, if not disenchantment, comes with finding so little excitement outside of odd meats and some quirky celebrations in their honor. This America may be very different from our own, but it still doesn’t seem to be a place where you’d want to eat. It is a country of starch, meat and vegetables (most often preserved.) Not long into the book, the pleasure of cultural immersion is replaced by a desire for color, variety, naturalism — something just a little more appetizing.

This America is also a place on the brink of dramatic change. One article describes an odd event, a Georgian “Coca-Cola” party, which became popular in many small towns. At these parties, women gathered to formally socialize and drink soda. It’s a foreboding event and profoundly ironic: here are these women, gathered to carefully savor a beverage that we now associate with the decay of America’s food culture as well as our collective health.

Take a look at the average farmers’ market and imagine the reaction of an American circa 1934 at the sight of it. It’s a rather ridiculous scene, this nearly pornographic display of food. We now have access to the largest cornucopia in history, a result of our hyper-stimulating, consumerist dreamscape. I suppose my tepid response to The Food of a Younger Land and its possum-and-potatoes aesthetic can be blamed on the over-abundance I experience every day. In fact, in turning the final page, I wasn’t craving a return to pre-Olestra America, but rather relieved to live in an era where all this nation’s bounty is as close as the corner store.

And yet, while foods of all kinds have become wildly plentiful since the Great Depression, so too has processed and factory-made foods. The kind of dishes described in The Food of Younger Land may not warrant celebration, but a 1930s diet would be a dramatic improvement over that of many modern Americans. A Nebraskan weiner isn’t exactly haut cuisine, but at least it didn’t have nitrates. Ultimately, what I took away from tthe book wasn’t nostalgia, but rather a gloomy awareness of how far we’ve come and how much more we still need to change.

Daly Clement is a Brooklyn-based gastronome. He graduated with a BA from Bennington college in 2006 and is currently applying to graduate schools for the fall of '10. Read more >